‘At every turn, Canada chooses the path of injustice toward Indigenous peoples’ 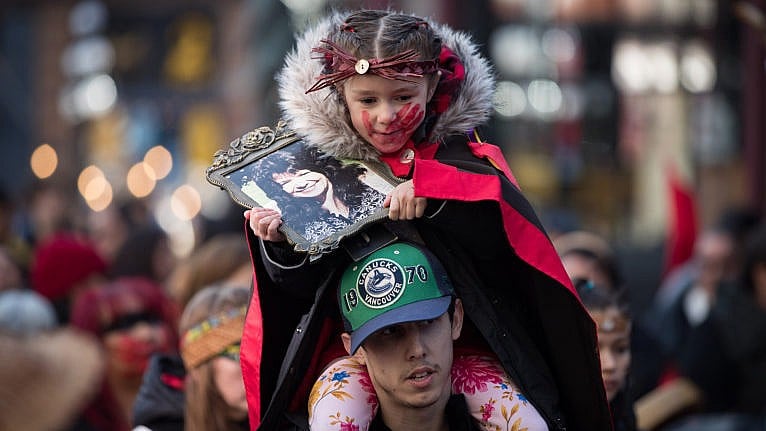 Sofia Mitchell-Schiewe holds a photo of her late grandmother Francis Mitchell while sitting on her father James Schiewe's shoulders during the annual Women's Memorial March in Vancouver, on Feb. 14, 2020 (Darryl Dyck/CP)

Reconciliation has not just gone off the rails—many Indigenous peoples think it’s dead. That is a damning assessment from peoples who, more often than not, have extended their hand in peace and given Canadian governments throughout history the benefit of the doubt. But with each broken promise, there is less collective faith that this Trudeau government, like many governments before it, has any intention of making good on its promises. A scan of social media posts after Liberal government announcements related to Indigenous peoples in the last five years have morphed from “historic steps forward” to “cautiously optimistic” and now, “reconciliation is dead.” You do not need a royal commission to know that Canada-Indigenous relations are not headed in the right direction.

In June 2019, the National Inquiry into Missing and Murdered Indigenous Women and Girls found Canada guilty of both historic and ongoing genocide against Indigenous peoples generally, and that it specifically targeted Indigenous women and girls. After reviewing the testimony of thousands of witnesses and experts, together with their own research and legal analysis, the inquiry found: “Canada has displayed a continuous policy, with shifting expressed motives but an ultimately steady intention, to destroy Indigenous peoples physically, biologically and as social units.”

READ: The entitlement of Canadian politicians

Prime Minister Justin Trudeau’s response was to “accept the finding that this was genocide” and promised to “move forward to end this ongoing national tragedy.” Despite this urgent humanitarian crisis, 18 months have passed and there is no comprehensive national plan to end genocide against Indigenous women and girls.

Canada has also failed to address the most obvious root causes of violence against Indigenous women, like sex discrimination in the Indian Act. The federal government not only delayed removing sex discrimination from the Indian Act’s registration provisions, which denied Indian status and band membership to thousands of First Nations women and their children, but it all but put registration on hold during the pandemic. Given that the tightly controlled government registration process is the only means for these excluded women and children to access First Nations-specific pandemic resources, Indian registration should have been declared an essential service.

But the federal government’s discriminatory actions against the most vulnerable First Nations peoples do not end there. It has continued to fight against the full implementation of the Canadian Human Rights Tribunal orders directing Canada to stop racially discriminating against First Nations children in foster care and has recently challenged the order to compensate these children. Literally days before Christmas, the federal government took off-reserve First Nations children to court to try to overturn an order that would ensure they get access to public services—during a pandemic.

At every turn, Canada chooses the path of injustice when it comes to Indigenous peoples, including how it deals with residential school survivors. Trudeau was elected on a promise to implement all of the 94 calls to action from the Truth and Reconciliation Commission’s final report on residential schools. The same report that found that, in all of its dealings with Indigenous peoples, Canada has engaged in genocide—cultural, physical and biological. An apology was made in 2008, and while some survivors have been compensated, some have not. Instead, Ottawa has spent more than $3.2 million fighting St. Anne’s residential school survivors since 2013. Now the federal government has taken them to court again to try to destroy police documents that provide evidence of sexual assaults, suspicious deaths and numerous abuses. This is unconscionable.

The pandemic makes these crises much more acute for Indigenous peoples. Take, for example, the staggering Indigenous incarceration rates in Canada. Indigenous peoples make up more than 30 per cent of those in federal prisons, with Indigenous women exceeding 44 per cent. The rates in provincial jails can be as high as 80 per cent Indigenous, but while provincial jails reduced their populations by 25 per cent to reduce the risks of COVID transmission, the federal government reduced its prison populations by a mere one per cent. These incarceration rates are directly related to systemic racism in the justice system and historic and ongoing abuses. More than one-fifth of all Indigenous peoples in prison came from residential schools and two-thirds from foster care. Genocide continues in a vicious circle.

Despite Trudeau’s mantra that there is no relationship more important to Canada than the one with Indigenous peoples, his government, like that of his predecessor, chooses to fight reconciliation in the courts, to the tune of $347 million since 2015. At every turn, Canada chooses the path of continued genocide, with devastating consequences for Indigenous peoples.

While governments have resisted reconciliation, Canadians have not. Canadians are far more informed about these human rights violations and are increasingly standing with Indigenous peoples as allies. Their collective demands for government accountability will only increase.

If Canada doesn’t soon change its path, it can expect some serious pushback on all fronts.

This column appears in print in the February 2021 issue of Maclean’s magazine with the headline, “The fight against reconciliation.” Subscribe to the monthly print magazine here.