Back to school—and still not serious about COVID testing

Tim Sly: Any suspicion of a sore throat or a hint of wheeziness, and a parent is asked to peremptorily remove their hapless pupil who is then taken to a coronavirus testing centre. That's where the tedium really begins. 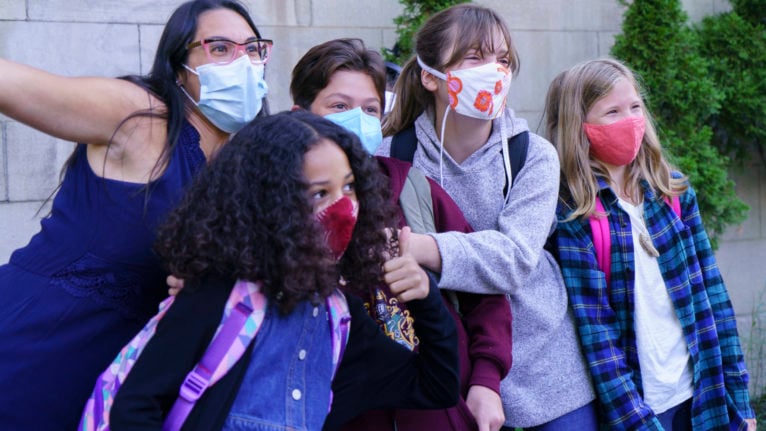 A teacher photo bombs a photo of a group of students reuniting as they go back to school at the Bancroft Elementary School in Montreal, on Aug. 31, 2020. (Paul Chiasson/CP)

Since the advent of the pandemic, the entire global community has found themselves several steps behind where we should have been, as this wily virus continues to visit its devastation upon our physical, mental, and economic health. Some locations responded so rapidly and with such forethought, they’ve hardly even noticed the pandemic. In this category, Taiwan is the poster child we all wished we had emulated. Canadian comparisons, however, are invariably drawn against our large southern neighbour, and even a quick peek over the fence at the raging dumpster fire initially in New York, and now in some of the southern states, is sufficient to allow us a soupçon of, if not superiority, then at least a Canadian modest satisfaction.

But classrooms are now open, and masked kids of all sizes are enthusiastically following unfamiliar floor markings to new homerooms, where they listen intently to the lengthy list of precautions, preventions and protections. Already in our first week, any suspicion of a sore throat, a slightest temperature increase or a hint of wheeziness, and a parent is requested to return to the school and peremptorily remove the hapless pupil who is then often taken to a testing centre. And that’s where the tedium really begins—long lines of prospective testees, some of whom report waiting for four or five hours only to be told they will have to return the next day. Similar scenes are playing out across Canada due in large part to the return to school. One Ontario school has already closed down after three staff members were found to be positive.

MORE: My day-long disastrous ordeal of trying to get a COVID test in Ontario

Clearly, the need to know who is positive at any one time has never been as important. But one of the painful characteristics of the virus causing COVID-19 is what must be described as its “stealth.” At least 40 per cent of virus-positive individuals are asymptomatic. Without sufficient, rapid, reliable testing, available at high volume, attempts to control this virus will, at least half of the time, resemble a blindfolded “pin-the-tail-on-the-donkey.” From the very beginning it’s been clear: follow only the symptoms and you miss half the infections. You would think that lessons learned from Ontario’s embarrassing performance during SARS-1 would have resulted in a greatly-informed public health decision-making process 17 years later.

After more than six months Canada has carried out more than six-million tests nationwide, but while we sit in 29th position on the scale of COVID deaths-per-million-population (243), we are at 40th position globally on the scale of COVID  tests-per-million-population (168,000), next to Saudi Arabia. Even Portugal and United Arab Emirates have been a lot more active in their testing programs. Remember New York? That city’s testing program is already one of the most ambitious in the country, swabbing more than 200,000 people a day, which is more than two per cent of all city residents.

One of the many criticisms levelled by Justice Archie Campbell in his 2006 report about Ontario’s response to SARS-CoV-1 was that decisions throughout the response were delayed by adhering to the “scientific dogma of yesterday,” the need to be 100 per cent certain of effectiveness before action was taken. “We should be driven,” insisted Justice Campbell in 2006, “…by the precautionary principle that reasonable steps to reduce risk should not await scientific certainty…In any future infectious disease crisis, the precautionary principle [should] guide the development, implementation and monitoring of procedures, guidelines, processes and systems for the early detection and treatment of possible cases.”

MORE: COVID and our schools: News, numbers and advice from across Canada

Epidemiologist and professor Richard Menzies of McGill University has just completed a review of 23 studies of saliva tests, requiring no lineups. You clear your throat, spit several times into a vial, and send it in. “Saliva testing,” Menzies said this week, “turns out to be as good—maybe even better—than nasopharangeal swabs for COVID.”

But Minister of Health Patty Hajdu maintained on Wednesday that the government “has not had a test submitted to Health Canada for approval yet that satisfies the regulators’ concerns.” One cannot help wondering whether the regulators are actively seeking such testing or waiting for tests to be sent to them. And are they holding out for 100 per cent precision?

Any epidemiology student knows that all tests, for all conditions, have false negatives and/or false positives. This also includes mass screening programs, case definitions, vaccines, masks, airport thermography systems, and so on. They all carry less than 100 per cent sensitivity and specificity. Physical protection is achieved by “layering,” and in the same way repeating the test gets close to a perfect score. A 96 per cent sensitivity on the first test becomes 99.8 per cent on a second test, missing only two positives in a thousand.

In the U.S., five saliva-based tests have been approved by the U.S. Food and Drug Administration (FDA), including a test developed by Yale University researchers. Holding out for the perfect test to come along cannot be called a valid public health policy, especially now that schools have opened up, the case count is on the rise again, and the testing lines are four-to-five hours long.