Battle of the bads

Tom Parkin: With two unpopular party leaders, expect the coming election campaign to be heavy on the overwrought rhetoric and negativity 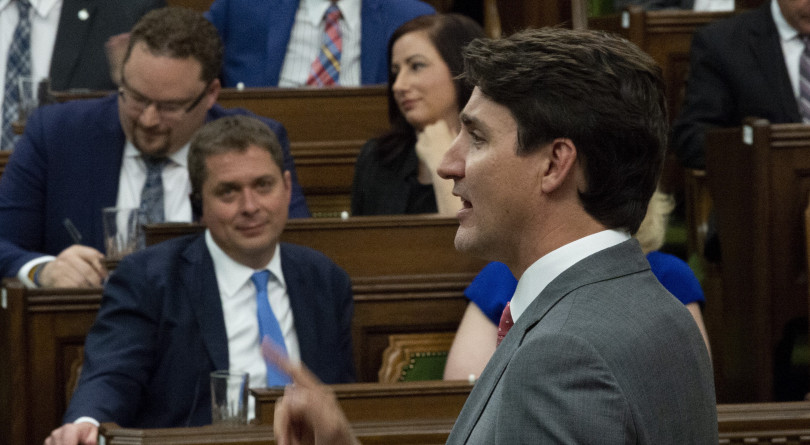 Trudeau responds during Question Period in the House of Commons on June 19, 2019 (Adrian Wyld/CP)

If you can’t wait for more overwrought rhetoric and negative attacks, good times are coming.

Not mentioned by either was Attawapiskat’s on-going water emergency. Or continued auto sector job losses. Or rising rents and out-of-reach house prices. The price of childcare. Or out-of-pocket medical costs.

And expect them to be ignored more. The election campaigns of Trudeau and Scheer will be about Scheer and Trudeau. No opportunity for a negative attack by one on the other will be left behind. And no attack will lack overwrought rhetoric.

Because there’s a compelling political logic. A problem—and an opportunity. Both Scheer and Trudeau are disliked leaders—how can we believe what they say?

According to the most recent Angus Reid survey released last week, Trudeau’s approval rating is at an all-time low at just 32 per cent. While that poll didn’t report on the Conservative leader’s approval score, slightly older data from Forum Research and Campaign Research show Scheer’s approval is either similar or lower.

It’s a battle of the bads. And we can see it playing out in the composition of party voting.

Take away the anti-supporters and Liberal or Conservative support is around 20 per cent. To win, each must try to corral the other’s “anti-supporters” into their voting coalition. So mudslingers are locked and loaded. Let fling the overwrought rhetoric and negative attacks of war.

Some scribes may say this is just modern politics. And maybe it is—but not in the way they mean.

For a year after election, Trudeau rode a crest of hopefulness, sustaining an approval rating over 60 per cent. Now that goodwill is gone. And it wasn’t spent battling vested interests while working to implement reforms that benefit Canadians. It evaporated as light shone on Trudeau’s public insincerity.

And Andrew Scheer, it appears, just never took off. He remains on the launch pad, loyally reading Harper-era scripts. And having offered little other policy, he’s now having his policy blank spaces coloured-in by the tax give-aways and cuts of Ontario Premier Doug Ford.

So we have two disliked leaders who can only be believed when disliking each other. And, chances are, when the battle of the bads is done, one will hold the prize—four years to please the powerful and disappoint the people. Yet there’s always this chance Canadians will demand something better.