Scott Gilmore: Riding a wave of momentum Joe Biden is suddenly the man to beat, while Sanders rages on, aggrieved and wounded 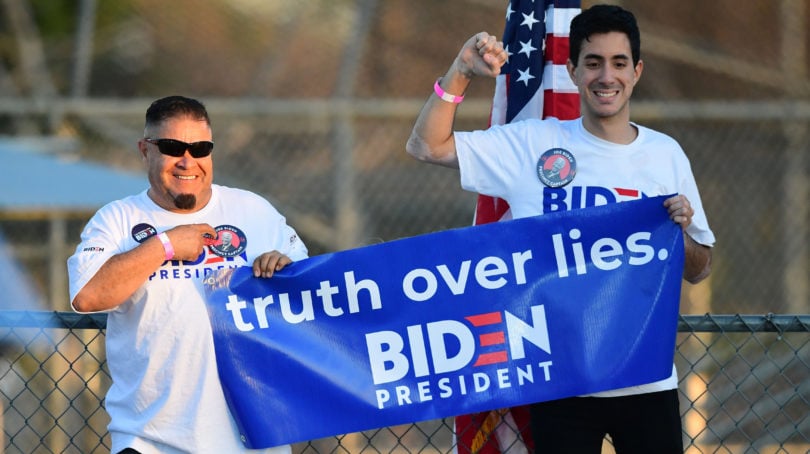 Joe Biden, lifted by a sudden burst of last minute support, has come from behind and emerged from Super Tuesday ahead of Bernie Sanders and the new front runner in the Democratic Primary race.

Just a week ago Biden was being written off for his poor fundraising results and fourth place showing in Iowa. But as polls closed last night he had outperformed all forecasts, taking Alabama, North Carolina and Virginia – but also impressively Texas and Minnesota.

Bernie Sanders still had a good night in New England (Vermont and New Hampshire) and in the west (Colorado, Utah, Nevada, and California), but underperformed overall and has fallen well behind Biden.

Elizabeth Warren also underperformed. In spite of a strong and clear message amplified by a large and well-funded campaign, she only managed third place in her home state of Massachusetts.

And, Michael Bloomberg, after spending $560 million on advertising (the equivalent to the cumulative spending of all parties in the last five or six Canadian elections combined), flamed out, winning only America Samoa and the mockery of pundits everywhere.

It’s called Super Tuesday because, with 14 states holding their primary races at the same time, over 30 per cent of delegates are in play. Historically, in both Republican and Democratic contests, the candidate that wins Super Tuesday goes on to win the nomination.

And, just a few days ago, it looked like Bernie Sanders was destined to sweep Super Tuesday and become the Democratic Party’s nominee for president. Which was incredible when you consider that Sanders is not even a member of the party. But, supported by a relatively small, angry, and deeply passionate base, Sanders’ demagogic message, albeit one short on details, consistently delivered him polling around 30 per cent. With the rest of the field fractured, this relatively meagre base allowed him to run up the middle.

The Republican party had a similar contest in 2016. Donald Trump, who had never been a member of the Republican Party himself, arrived with a demagogic message (short on details), and immediately attracted a small, loud and angry base. The other candidates didn’t know how to stop him and few were willing to drop out in order to allow the moderate votes to coalesce around a viable Trump rival. While Ted Cruz and John Kasich fought over second place until May, Trump ran the ball into the endzone.

The Democratic Party’s moderate wing appear to have studied the Republican game tapes. Pete Buttigieg and Amy Klobuchar realized that staying in the race would only help Sanders. So they took one for the team and dropped out just before Super Tuesday, pivoting towards Joe Biden with enthusiastic endorsements.

Momentum is a mysterious thing. It’s hard to explain where it comes from and how much it matters. But, there is no question that Biden rode a sudden wave of new support into Super Tuesday. After his win last week in South Carolina, the rush of endorsements, and a shift in the media narrative, polls jumped almost overnight.

What’s next? The betting money is now on Biden to win the Democratic nomination. It would take a serious scandal, or a sudden illness (it’s worth noting that all of the remaining Democratic candidates are over 70 years old—the age most vulnerable to the Coronavirus epidemic) to bump Biden out of the lead.

Trump and the Republican party will continue their attempts to stir discontent among Democrats by claiming Bernie Sanders has been robbed by the party establishment. And, you can safely assume GOP legislators will develop a sudden and “sincere” concern about possible corruption in Ukraine, or anywhere else Biden’s son Hunter has worked.

Bernie Sanders is now literally yesterday’s man. Nonetheless, he will stay in the race. His entire career has been about fighting “the man”. So Sanders will trudge through all the remaining primaries, aggrieved, wounded, and destined to lose—but still able to rail against the party establishment at every whistle stop. This is Sander’s natural habitat. In the 2016 Democratic race, he didn’t concede until the convention in late July.

Elizabeth Warren will quite possibly stay in the race, too. She is passionate about her many policy proposals, she is well funded, and she has a strong national team. It makes sense for Warren to keep going, if only to stay on the debate stages and in the daily news, talking about the issues that matter most to her.

Bloomberg, however, is widely expected to drop out of the race. While he has drawn raucous crowds, he appears more interested on spending his money to defeat Donald Trump, and not necessarily to elect Michael Bloomberg. After Super Tuesday, it is clear that he is not the man who will be on the ballot this November. Bloomberg and his team are expected to meet today to assess the state of the campaign and take a decision on next steps.