Blocking China's takeover of Aecon was Trudeau's only defensible option

Opinion: Until now the Trudeau government was unique among G7 countries in its pliant attitude to Beijing’s ruthlessly expansionist state-corporate ambitions 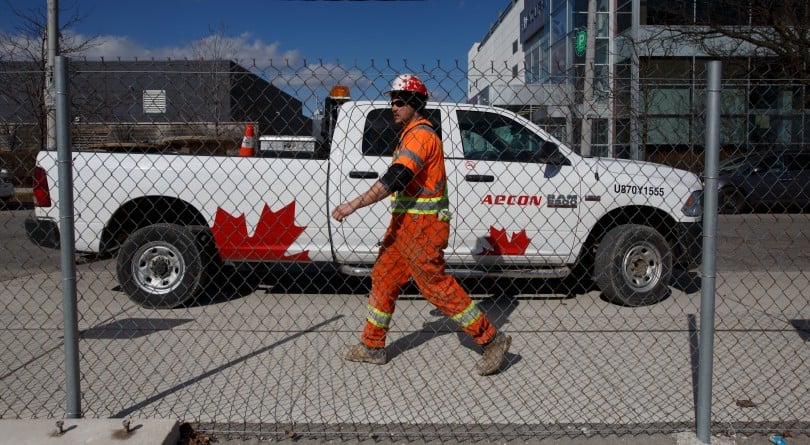 A worker passes in front of a truck displaying Aecon Group Inc. signage at a construction site in Toronto, Ontario, Canada, on Monday, Feb. 26, 2018. Photographer: Cole Burston/Bloomberg via Getty Images

It was an effort that Prime Minister Justin Trudeau had to be dragged into making in the first place, but now that it’s over, a full national security review has concluded that allowing a global conglomerate controlled by the Chinese Communist Party to take over the Canadian construction giant Aecon Group Inc. was a really stupid idea, all along.

“As is always the case, we listened to the advice of our national security agencies throughout the multi-step national security review process under the Investment Canada Act,” Innovation Minister Navdeep Bains explained Wednesday. Cabinet has decided, after all, to stop Beijing’s CCCC International Holding Limited (CCCI) from taking over Aecon. “Based on their findings, in order to protect national security, we ordered CCCI not to implement the proposed investment,” Bains said.

CCCI is the overseas acquisitions arm of the China Communications Construction Co. (CCCC), one of the largest of Beijing’s state-owned behemoths. Its chairman, Liu Qitao, is a senior Communist Party secretary and a close associate of China’s all-powerful president, Xi Jinping. The Communist Party is deeply integrated at all levels of decision-making in the corporation, which has signed $40 billion worth of contracts in Beijing’s worldwide “Belt and Road” infrastructure initiative over the past three years, covering airport construction, highways, deep sea ports, railways and bridges.

READ: China is a bigger threat than Russia—but you won’t hear Trudeau say it

Perhaps most contentiously, CCCC’s subsidiaries have been building artificial islands in the South China Sea, which Beijing has now effectively annexed in defiance of international rulings on the law of the sea. The CCCC’s various overseas arms have also been implicated in a series of bid-rigging and strong-arming operations in Kenya, the Phillippines and Bangladesh, and the company only recently emerged from an eight-year blacklist imposed by the World Bank.

Scuttling the CCCI-Aecon deal was the only defensible decision available to Trudeau’s government, which is otherwise unique among the G7 countries in its strangely pliant and yielding attitude to Beijing’s ruthlessly expansionist state-corporate ambitions. The $1.51 billion acquisition arrangement had been stiffly opposed by the Canadian construction industry and by intelligence analysts.

The opposition Conservatives and New Democrats had also loudly demanded the national security review. It is hard to imagine how the review would have turned out differently: two former directors of the Canadian Security Intelligence Service, Richard Fadden and Ward Elcock, had come out swinging against it.

So had Charles Burton, a highly respected former counsellor with the Canadian embassy in China and an associate professor of political science at Brock University. The decision was clearly the right one, Burton told me late Wednesday. But just because it was the right decision, it wasn’t obvious that it was the decision cabinet would make.

READ: I found an SOS note from China in a box of decorations—and it changed how I live

In the first place, Trudeau agreed to a full national-security review of the CCCI bid only after a public outcry about the national security risks involved in allowing a Chinese state-owned enterprise access to critical Canadian infrastructure projects. Secondly, the Trudeau government has displayed an unseemly enthusiasm for more intimate economic ties with the Beijing regime, despite the public’s distaste and consistent warnings from the intelligence community.

“I had expected a terse announcement in the summer Parliamentary recess that the national security review had been completed and that cabinet had determined that the takeover could go ahead,” Burton said. An added likely factor was the U.S. government’s increasing alarm about China’s purloining of American technology and its underhanded trade practices, as well as Beijing’s manipulation of the North Korean nuclear crisis.

“The Aecon deal going through would confirm suspicions in Washington that Canada is soft on China,” Burton said. It would have risked a further complication in the already troubled NAFTA renegotiations. The cabinet would also have had to worry about a public opinion backlash across Canada.

“It appears that Canadians are more and more aware that economic engagement with China delivers significant benefits to some sectors of Canada’s business and political elite, but at a considerable cost to Canada’s sovereignty and economic opportunities for ordinary Canadians,” Burton said.

‘The danger lies in our laziness in strategic thinking’

The announcement is “great news,” Duanjie Chen, a former research fellow with the School of Policy Studies at the University of Calgary, and currently a Munk Senior Fellow at the Macdonald-Laurier Institute, told me. In a paper the Institute published this month, Chen argues that a CCCI takeover of Aecon would imperil Canada’s national interests: “The danger lies in our laziness in strategic thinking and refusal to take a long-term view. . . China is using its SOEs (state-owned enterprises), in the disguise of commercial entities, to tear our system apart by acquiring our top-brand companies one by one. That is not something that we should calmly accept.”

READ: Canada’s media is in thrall to China

It is by no means clear whether Wednesday’s Aecon decision is a one-off, or whether it represents a clean break with Trudeau’s long-standing enthusiasm for Chinese state investment in Canada’s economic assets. The Chinese embassy, which has gone so far as to lecture the Canadian public to “adjust its mindset” about Beijing’s state-owned enterprises and to desist in its “immoral” objections to SOE takeovers of Canadian companies, was not pleased by the Aecon decision. “There is no doubt that the decision made by Canadian government is by no means a good news for the investment co-operation between China and Canada,” according to an embassy statement.

It could be that the acceleration of alarm about Beijing’s bullying and influence-peddling in Europe, the U.S. and Australia is coming as a kind of late wake-up call in Trudeau’s circles. But Burton says Trudeau may be just hoping to weather the storm.

“If the Liberals get a second mandate in 2019 it is possible that the government will accede to a China free trade agreement accepting Chinese conditions that Canada support the Belt and Road initiative, including pipeline infrastructure to get oilsand oil to tidewater in B.C., and development of Chinese Arctic port facilities,” Burton said. It’s also possible that down the road, a Trudeau government would “remove restrictions on Chinese state investment in Canada and cease to engage with China on human rights violations or criticize China’s international policy.”

For now though, whatever the Trudeau cabinet’s reasoning — Investment Canada Act national security reviews are not subject to public scrutiny — Trudeau’s decision to stop the CCCI takeover of Aecon was the right one.