Butts is gone, but #LavScam rolls on

Andrew MacDougall: The Liberals might be hoping Gerry Butts will be the firebreak between them and the SNC-Lavalin scandal. It’s wishful thinking. 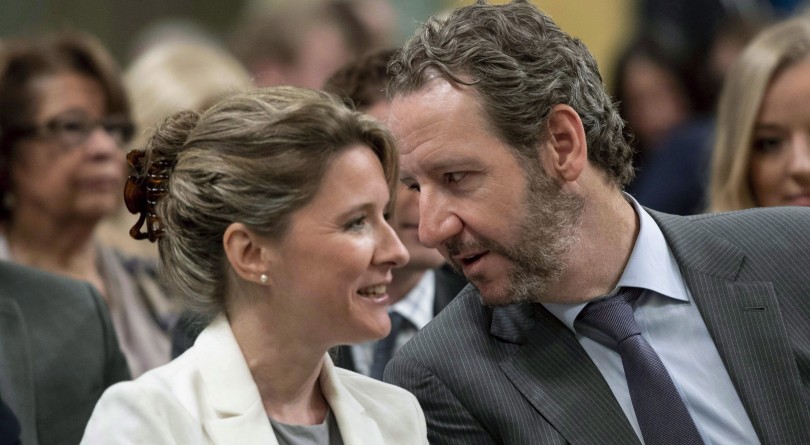 Butts speaks with Katie Telford, chief of staff to the Prime Minister, before a swearing in ceremony at Rideau Hall in Ottawa on Wednesday, July 18, 2018. (Justin Tang/CP)

Resigning your best friend to the political scrap heap can’t have been an easy day at the office.  Especially when that best friend has been the best brain at your disposal during your meteoric rise to the leadership of the Liberal Party, and then Canada. Losing Gerry Butts, as Trudeau did yesterday, is akin to having the foundation ripped out of your house. While you’re still living in it and trying to convince Canadians it’s a safe place to call home.

But, in politics, sacking your best mate is sometimes the price you have to pay. After all, there is only one king, and he must be protected at all costs. If a scandal like SNC-Lavalin is ravaging a government, a firebreak has to be cut into the ground, before everyone gets burned. Butts, the Liberals hope, will be that firebreak.

No one left in the Prime Minister’s Office should be holding his or her breath, especially the Prime Minister; if anything, the Butts resignation has pumped even more oxygen into the fire. As messy as yesterday was, greater messes lie ahead.

Nothing continues to add up. Reading Butts’ resignation letter on its own, you’d be hard-pressed to explain why he’s resigned. As he states on multiple occasions, he did nothing wrong and behaved properly at all times. His resignation is only, he says, an attempt to take a distracting target away from the government’s efforts to make Canada the bestest place in the world.

READ MORE: Are these the ‘answers’ of a Prime Minister who’s done nothing wrong?

So why throw yourself out the door?

As former Paul Martin director of communications Scott Reid describes in a suspiciously well-informed series of tweets, Butts could be freeing himself up from the constraints of serving in the PMO in order to fight what he expects will be a soon-to-be unleashed legal fight with Jody Wilson-Raybould, Canada’s former attorney-general, a.k.a. the other party in the SNC pressure two-step. This makes sense.

It might even be the Prime Minister’s Office is now in receipt of a letter from Thomas Cromwell, Wilson-Raybould’s attorney (and former Supreme Court Justice), describing the “pressure” Wilson-Raybould says was brought to bear by the PMO upon her decision-making on the question of SNC-Lavalin.

At this point, however, speculation isn’t useful.  Especially from me, given how I predicted Butts would never get got two days before he got got. All we know is that some form of “pressure” was described—albeit anonymously—in the original bombshell Globe and Mail report from a few weeks ago, and that Wilson-Raybould felt compelled to resign from cabinet when Trudeau offered his interpretation of the interaction between his office and hers.

And now we can add to that the Butts termination without cause.

Which makes it sound like we’re in for the mother of all he said / she said battles. Because even in an age of emails, texts and Whatsapp, we can’t expect much of a record describing whatever transpired. Savvy political operatives know not to leave footprints on sensitive files, which comfortably describes the SNC situation.

In other words, everything might come down to Trudeau’s word—and that of the players in his office—against that of Canada’s first female Indigenous justice minister, and that of her staff.  Job one for Trudeau will now be to make sure as much of the battle takes place behind closed doors, away from prying reporters, or anyone else who could transmit the details to Canadians in real-time. A forum like an Ethics Commissioner’s investigation, which usually takes lots of time and leaves no lasting marks, as the investigation into Trudeau’s law-breaking Aga Khan trip proved.

In the meantime, the opposition members of the parliamentary Justice Committee hoping to question the principals at the heart of the dispute will continue to be shut out. NDP leader Jagmeet Singh will not get his public enquiry, which must be called by the government. In other words, Canadians should continue to expect more heat than light when it comes to what did or didn’t happen with SNC. Unless, that is, the RCMP decide to get involved.

Which isn’t to say Canadians won’t be making up their minds.

On the one hand they’ll see a mega-corporation from the politically-sensitive province of Quebec facing potential ruin, with a trail of meetings with the government leading to its door and a favorable legal remedy tucked into the budget on its behalf, and a demoted, resigned and now silent former attorney general with a very public letter lauding the independence of Canada’s justice system.

And on the other, they’ll see a government that still can’t get its story straight, trying to shut down every public avenue of enquiry into the matter, with a formerly untouchable advisor now out the door for apparently no good reason whatsoever.

We needn’t wonder what Canadians will make of that mess.