By buying Trans Mountain, the Trudeau government breaks an array of promises

Opinion: In one fell swoop, the Liberal government's purchase of Kinder Morgan's pipeline fails many groups, from Indigenous communities to the provinces themselves 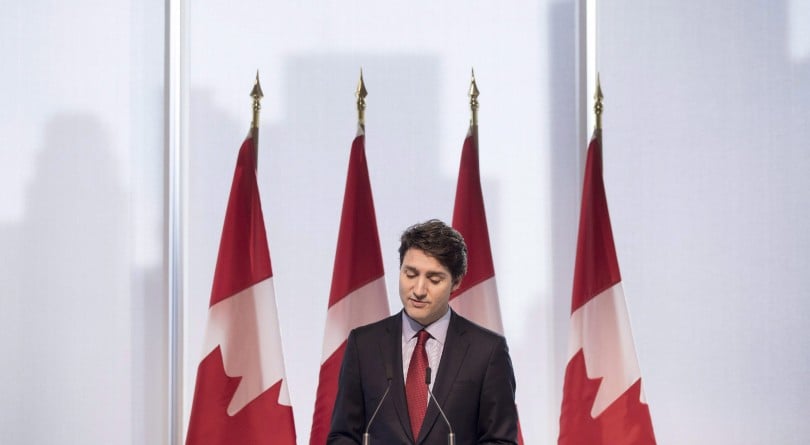 Prime Minister Justin Trudeau speaks at the Canadian Transformational Infrastructure Summit and the Canlnfra Challenge in Toronto on Tuesday May 29, 2018. (Chris Young/CP)

Pam Palmater is a Mi’kmaw citizen and member of Eel River Bar First Nation. She has been a practicing lawyer for 20 years and currently holds the Chair in Indigenous Governance at Ryerson University.

That was Prime Minister Justin Trudeau’s response to APTN when asked whether, if Indigenous peoples did not want a pipeline on their territory, would “no” mean “no” under his government. His answer was definitive, with little room for interpretation. In case there was any doubt about his answer, Trudeau also promised to implement all of the Truth and Reconciliation Commission’s 94 calls to action, focusing first on implementing the United Nations Declaration on the Rights of Indigenous Peoples (UNDRIP) into law. UNDRIP’s Article 19 specifically provides that states must obtain the free, prior and informed consent of Indigenous peoples prior to implementing any decisions that would impact them.

It would be just one of the dizzying number of explicit promises that Trudeau would break by purchasing the Trans Mountain pipeline from Kinder Morgan for $4.5 billion.

Before and after the election, Trudeau made another key promise about protecting the environment by investing in clean technologies and energy conservation, reducing Canada’s carbon footprint, and protecting water and wildlife by expanding protected marine environments. The purchase of the Trans Mountain pipeline serves only to threaten our water and wildlife, not protect it. As if on cue, the pipeline suffered an 100-litre leak—its 83rd since 1961—just this week. The science is clear on this: Canada cannot expand on or build new pipelines if it expects to keep global warming and the accompanying climate change at bay.

And here’s another vow broken: During the election, Trudeau committed to working in “true partnership” with the provinces, but since the election, he has done just the opposite. Trudeau allied with Alberta to condemn B.C.’s public concerns about the health and safety of the coastlines in British Columbia. Trudeau’s actions not only shattered any real hope of federal-provincial partnership in B.C., but also fostered such an adversarial atmosphere that Alberta felt empowered to start blockading trade with B.C.—first for wine imports, then potentially for energy resources. That failed partnership promise may have hurt B.C., but it also stung Indigenous peoples with whom he promised to engage in a nation-to-nation relationship based on the respect for Indigenous rights. Trudeau’s flowery speech to the Chiefs in Assembly after his election—in which he said that no relationship was more important to him than the one with Indigenous peoples—rings hollow now.

Given the speed at which Trudeau and his cabinet made the decision to buy this pipeline, one might think that they had completed a full assessment. However, even the true cost of this pipeline is in dispute and the government won’t provide details on the total costs. The cost to purchase the 65-year-old assets may be $4.5 billion, but if we accept Kinder Morgan’s estimate that the cost to expand the pipeline is $7.5 billion, and you add other costs, like financial assurances for spills, it has been estimated that the real cost could be as high as $15-to-$20 billion. Yet, there is no Kinder Morgan line item in the last federal budget that dedicated $15 billion to buy this pipeline. Nor can the Liberals reasonably argue that rescuing a Texas corporation from financial loss by purchasing the pipeline is anywhere close to “in the national interests.” The national interest is not met by serving the interests of one province, nor is it served by allowing First Nations to go without safe drinking water—the cost of which could have been paid for with this $4.5 billion now allotted for an American company.

Various United Nations treaty bodies have tried to persuade states like Canada to abide by UNDRIP’s core rights, and have even recommended moratoriums on further pipeline approvals in both Canada and on the United States’ Dakota Access pipeline until Indigenous rights are properly addressed. It is clear from Trudeau’s decision that these rights will not be respected. A former Alberta energy minister’s comments about sending in the army to stop protesters raises even more concerns for the safety of Indigenous peoples and their allies. After all, if Canada would send in the military to ensure a private golf course gets built in Mohawk territory—as they did during the Oka crisis—why wouldn’t they do the same for the pipeline they just bought?

But Indigenous peoples and their allies have not taken this threat lightly. The Treaty Alliance against Tar Sands Expansion is an alliance of Indigenous Nations in Canada and the U.S. against pipelines and have been active in protesting on the ground. Other First Nations are engaged in litigation challenging approvals in court. Still other are working with allies to inform the public and pressure politicians.

Indigenous peoples, civil society groups and allies from across Canada have issued a statement that they consider the purchase of this pipeline to be an “act of war” against their peoples. Trudeau may well be in for a very hot summer.