By failing to apply Magnitsky sanctions, Canada fails the memory of Jamal Khashoggi 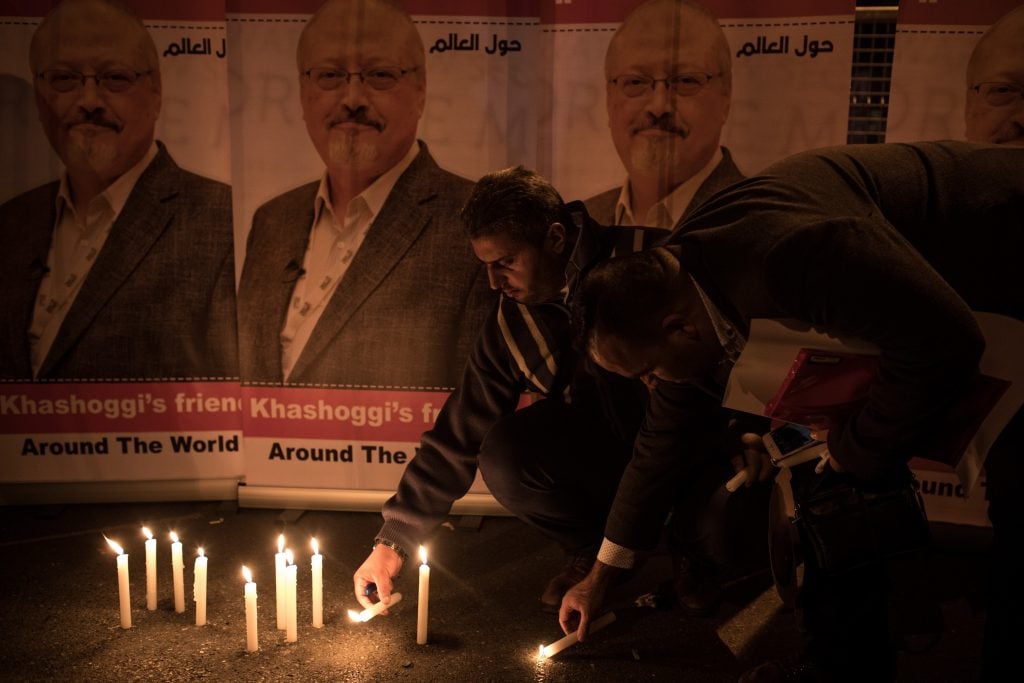 People light candles in front of posters of Jamal Khashoggi during a candle-light vigil to remember journalist Jamal Khashoggi outside the Saudi Arabia consulate on October 25, 2018 in Istanbul, Turkey. (Chris McGrath/Getty Images)

Marcus Kolga is a writer, filmmaker, human-rights activist, and expert on Russian disinformation. He is a senior fellow at the Macdonald-Laurier Institute for Advancing Canada’s Interests Abroad.

It’s been one year since Canadian parliamentarians unanimously passed the Justice for Victims of Corrupt Foreign Officials Act, which effectively ushered in Magnitsky human-rights laws, named after the anti-corruption investigator who died while in Russian custody. These laws mean that foreign human-rights abusers can be targeted with sanctions, from asset freezes to travel bans.

The threat of sanctions is a powerful tool, and the overall effectiveness of Magnitsky legislation can be measured by the reaction of those repressive regimes whose officials are targeted by it. Russian President Vladimir Putin, for instance, has made it a primary foreign-policy goal to have global Magnitsky legislation repealed, as it directly threatens Putin’s own estimated $200-billion in assets and, perhaps more importantly, the assets of the tangled web of officials, agents and oligarchs who keep him in power. When the U.S. enacted Magnitsky legislation in 2012, Putin reacted by banning all U.S. adoptions of Russian children, and the ongoing Mueller investigation into Russian meddling in the 2016 presidential election is centred around how sanctions against Kremlin-linked human-rights abusers and other corrupt officials were lifted. And Canada’s own decision to adopt Magnitsky legislation was met with idle foot-stomping about reciprocal measures and an intense misinformation campaign against critics here, including Canada’s foreign minister, Chrystia Freeland.

What is clear is that Magnitsky sanctions do cause corrupt foreign officials to reconsider the consequences of their actions. There is hard evidence that they do own assets in Canada and that they frequently travel to this country, even if the negative stigma of being publicly identified of engaging in corruption and abusing human rights is insufficient to change their behaviour.

However, since Canada placed its initial names to the Canadian Magnitsky list a few weeks after adopting the legislation—which included Venezuelan, South Sudanese, and Russian officials—only one name, Myanmar’s Maj.-Gen. Maung Maung Soe, has been added since. It is clear that despite dedicating $22.2 million over five years to strengthening Canada’s sanctions regime, implementation of the law—which includes monitoring and enforcement—is falling behind.

READ MORE: Why is Canada so weak on Russia?

It’s become a timely issue again in the case of murdered Saudi journalist Jamal Khashoggi. Since last being seen entering its consulate in Istanbul on Oct. 2, the Saudi government has worked through several bizarre explanations about why Khashoggi never reemerged. On Oct. 25, the official story shifted from a fistfight gone wrong to premeditated murder. What is quite clear now is that the murder of Jamal Khashoggi was politically motivated and designed to silence him—and had Magnitsky sanctions been applied by Canada earlier to those involved in the abuse of journalists, the Saudi officials who ordered this assassination may have thought twice before sending a hit squad to Istanbul. At the very least, placing Khashoggi’s executioners on Canada’s list now would send a strong message to future killers.

Among the most prominent cases is that of the Ukrainian journalist and filmmaker Oleg Sentsov. According to Amnesty International, in May 2014, the Russian security service (FSB) arrested him at his home in Simferopol, the capital of Russian-occupied Crimea. “They put a plastic bag over his head and suffocated him until he passed out,” the report reads. “They threatened him with rape and murder to force him to ‘confess’ to organizing bombings and other “terrorist acts” as well as to possessing illegal firearms.” In the end, Sentsov was sentenced to 20 years in prison.

Canadian citizens are also being targeted for repression by foreign regimes. Huseyincan Celil, a Canadian citizen and Uighur activist, was detained by Chinese officials, tortured and sentenced to 15 years in prison in 2006. And most recently, Pyotr Verzilov, a Canadian citizen and a member of the Russian activist group Pussy Riot, was poisoned in Moscow, apparently for his role in investigating a Russian mercenary force linked to a close associate of Putin’s.

The ongoing monitoring of human rights abuses, including the diligent investigation of those responsible for them, is the foundation upon which our sanctions strategy must be built. A robust, internationally integrated sanctions regime is possible if we work with our allies in NATO and the G7 and with human rights NGOs and activists to identify and monitor cases and perpetrators, as well as gather evidence.

If Canada does not do so—and it does not use every tool it has—it fails human-rights activists, political dissidents and journalists like Jamal Khashoggi. We owe it to him to ensure that other journalists, activists and dissidents are not threatened in the same way, by deploying Magnitsky laws and more to investigate those responsible for reprehensible human-rights abuses, and hold them to account.