Calgary needs some vision, not nostalgia

Jen Gerson: The city's 2026 Olympic bid is not a grassroots movement. And in this age of cynicism, it's not what Calgary needs to move forward. 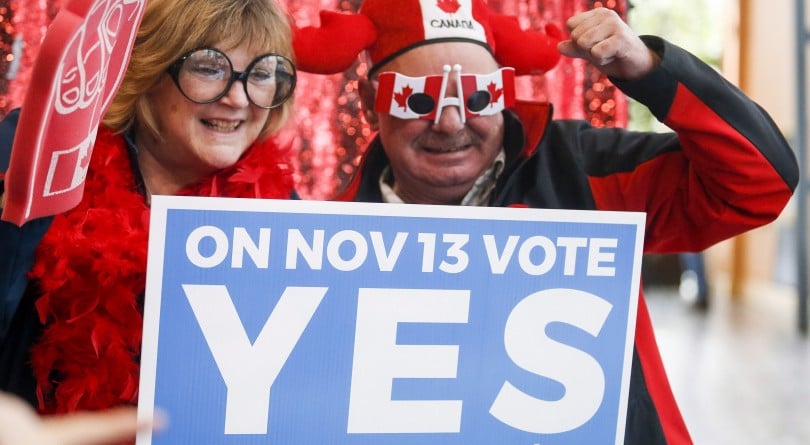 Calgary 2026 Olympic bid supporters pose in a photo booth during a rally in Calgary on Monday, Nov. 5, 2018. (THE CANADIAN PRESS/Jeff McIntosh)

If you were ever a fan of official, authorized Olympics, you’d be sorry to miss the crowd that gathered outside Calgary city hall as the council inside debated whether or not to can a plebiscite to bid for the Olympics in 2026.

Vancouver, Rio, team t-shirts and jackets abounded; there was more Olympics gear on the 200 supporters assembled than you’d typically see at a Hudson’s Bay display.

Sports organizations had put out the call, and the city’s athletes and aficionados responded. It was time to wave the flag in support of volunteerism, and can-do attitudes, and a great Calgarian revival. The bid, the plebiscite, the very soul of the city itself was on the line.

After several days of frantic, last minute negotiations, the Calgary 2026 bid corporation announced that the three orders of governments found the required $2.875 billion necessary to move ahead with the plebiscite. (Of course, that figure was a touch short of the $3 billion originally touted in earlier estimates thanks to a miraculous overnight reduction in security costs. This, despite the fact that security costs are one of the line items most likely to balloon.)

To paper over the murky accounting, the bid committee played a saccharine Olympics video featuring the most heart-rendering moments of the 1988 and 2010 games; a young torchbearer climbing the final steps, then mayor Ralph Klein in relief.

Even with the proposed public funding in place, this whole process has been so shambolic that the yes team will need to secure a resounding victory in the plebiscite. A majority of city council voted to stop the bidding process altogether—but such a drastic move required 10 votes in favour, and the final vote was 8-7.

Now, the whole scheme rests on the public vote, set for Nov. 13.

Living here, it’s hard to miss the lack of general enthusiasm for a 2026 games. There have been a handful of public meetings, but the majority of social media commentary has been either negative or, more ominously, absent.

READ MORE: Putting the limp in Olympics: Calgary’s 2026 bid lives on, but for what, exactly?

There is nothing “grassroots” about the Yes side of the bid. A pro-2026 lobby group is staffed by well-known and well-established political operators. There is a long-standing link between athletics and power in Calgary. This bid is largely backed and promoted by city elites who seem oblivious to the concerns of a city struggling with a high unemployment rate, torpid house sales and a depressed downtown core.

Beyond all the red-suited supporters rapt by the city hall proceedings, a man with long hair and a shabby black leather coat sped past: “They’re going to spend more on this than they are on the people.”

People here are looking for answers to how to improve their day-to-day lives; Calgary seems to address these questions with ever grander projects. The fanciest central libraries, historic-sized YMCAs, Olympic dreams! It’s all well intentioned and beautiful, but these are the sorts of projects that leave legacy-cementing plaques, pad out already overstuffed resumes, or look good in backdrops on campaign promotional material.

In 1988, Calgary hosted a great winter Olympics, and there is no doubt that that show was an enormous morale boost to a city suffering from a catastrophic oil set back. It’s reasonable, then, to imagine that Calgary 2026 could revive that same spirit, optimism and volunteerism in a similar way. But this is 2018, not ’88.

This isn’t an era of nostalgia. It’s an age of cynicism, in which public trust in most of our institutions have been too eroded to expect the easy compliance of any electorate.

There is a general distrust of the politicians involved, the numbers proposed by the bid. And there is certainly no good reason to trust the International Olympics Committee.

I fear, then, that this plebiscite will have a Brexit-lite vibe about it. Those who bother to turn up will be the sort to channel several years of frustrated growth and disappointed economic hopes into a No vote.

If the plebiscite does fail, there will be think pieces a-plenty examining what the outcome says about Calgary’s dour mood and changing character.

Yes supporters question whether this city has lost its “can-do” attitude and have offered dire predictions of the city’s decay. I find this messaging both bizarre and manipulative; despite the downturn, Calgary is still the country’s fastest-growing city. Having a “can-do” attitude doesn’t oblige us to take flight with every passing fancy.

What does concern me, however, is the slow erosion of civic institutions that these votes tend to reveal. There are good reasons to dislike and distrust the politicians, the numbers, the council, the media, the boosters and the cynics alike. But at some point, simply tearing things down isn’t going to be enough. We will breed new sacred cows to replace the ones we are now splitting up for steak.

We need a unifying vision for what this city should be in the decades to come. If we aren’t going to build that vision around an Olympic bid—and, to be clear, I don’t think that we should—what should that vision be?