Can your blood not be moved for Somalia?

Opinion: Weeks after hundreds were killed, another attack struck Mogadishu—stories of death that have become achingly familiar for Somali-Canadians 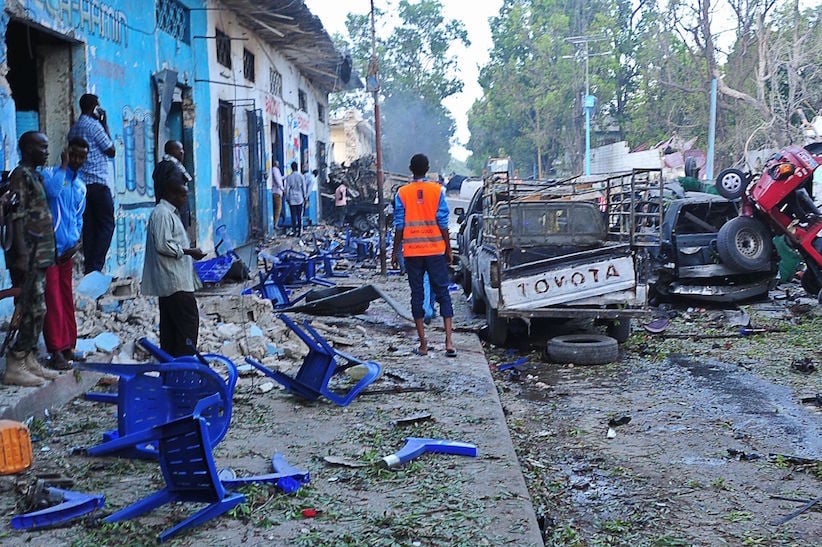 People stand among the damage at the scene of a blast after a car packed with explosives blew up outside a hotel in Mogadishu on Oct. 28, 2017. A minibus also exploded at a nearby junction, with emergency services reporting “many dead bodies.” (Mohamed Abdiwahab/AFP/Getty Images)

Hawa Y. Mire is a diasporic Somali storyteller, writer, and strategist with more than a decade of experience in high-impact community-based initiatives, as well as the co-editor of MAANDEEQ, a collective of young Somali-demics from diverse fields who write about the Somali territories and the Somali diaspora. She holds a master’s degree in environmental studies from York University where her research was preoccupied with storytelling as a site of social-boundary making, and is currently completing her PhD in anthropology at Carleton University.

On Oct. 14, I was participating in “Somali Studies in Canada: Resilience and Resistance,” a multidisciplinary colloquium held at Carleton University. It was the first of its kind in Canada, and more than 50 brilliant, bright and eager academics, artists, frontline workers, and grassroots activists from Ontario and Quebec gathered to discuss the Somali diaspora’s resilience and resistance over the past 30 years in Canada. But that was abruptly interrupted as attendees began to hear news of a massive explosion in Mogadishu, Somalia. Two hundred casualties were immediately reported; in just a few hours, more than 300 people were believed to be dead. It is being described as the deadliest attack to take place in the region.

Just two weeks later, on Oct. 28, a car bomb detonated in front of a busy hotel and restaurant as gunmen took hostages inside; later that day, a vehicle carrying government troops triggered a roadside bomb planted by the militant group al-Shabaab. In the end, at least 23 people were declared dead in Mogadishu.

For those of us in Canada who arrived in the early 1990s and who left family and people behind, stories of death and violence have become achingly familiar. Families that have made difficult decisions to leave loved ones and a homeland behind are constantly forced to relive them in the immediate moments after horrific events have taken place. It felt like I had barely been given a moment to breathe before I began to call family members and friends to make sure everyone was accounted for. This in-between place—of frantic calls, racing hearts, guilt for the relief that everyone is just fine, frustration, anger and fatigue—was eerily familiar.

Since the explosion, the question at the top of the general public’s mind is: “will your community mobilize?”

To me, the question isn’t worth asking. Over the summer, thousands in Somalia were displaced and put at risk of starvation due to a rapidly escalating drought. According to the UN Office for the Coordination of Humanitarian Affairs, Somalia is facing a humanitarian crisis and is at risk of a severe famine—all of this coming just six years after the last deadly drought. They note that between November 2016 and May 2017, an estimated 739,000 people were displaced by the drought; more than 480,000 of the displaced, or 65 per cent, are younger than 18. Shortly after learning this information, a vast majority of the Somalis I knew in Canada mobilized. Elders added extra remittance payments to their monthly spends; young people coordinated events and fundraised money. Even those who could not give money retweeted, shared statuses and ensured the public was aware of the dangerous situation Somalia was in. Young Somalis became #FamineResistors with many in our city doing the work to garner attention, collect donations and forward to the appropriate hands in Somalia.

The question, then, is not whether we will mobilize. The question is: will you?

On Oct. 8, just six days before the horror in Mogadishu, 16-year-old Zakariye Ali was killed in a Toronto junior high school parking lot; three days before that, 29-year-old Abdulkadir Bihi was shot to death in Etobicoke: Allahu naxariisto. Mustafa Mattan, 28, was fatally shot through the door of his apartment building on Feb. 9, 2015; no killer has been apprehended. He is just one of at least 100 young Somali men between Toronto and Alberta whose deaths continue to go unsolved by local police despite active work by community members and agencies such as Positive Change that have worked to address the lack of information provided by RCMP and other authorities. Somalis continue to be deported by the Canadian government by Immigration Minister Ahmed Hussen. Despite Hussen’s identification as Somali, it’s important to remember that representation does not always mean we are allowed to stay.

MORE: Our profile of Ahmed Hussen, the fast-rising minister

On top of this, Somalis continue to face negative media depictions that work to present the general public with correlations to terrorism, piracy, and gangsters. Media narratives like Vice’s documentary This is Dixon and the now-discontinued CBC drama Shoot the Messenger which looked to fictionalize the Rob Ford crack scandal. This scandal saw “Project Traveller” come to a head in June 2013 when police stormed an apartment building on Dixon Road in pre-dawn raids that resulted in more than 60 arrests of primarily young Somali men. When the Canadian public and media only know us through the analysis of violence and terror—a characterization all too frequently and easily deployed—there is only attention granted to us in our deaths.

Why do you only want us when we are dead?

In early October 2017, our mothers cried on camera for the kids they raise here. In July 2017, they wept while they watched Abdirahman Abdi be brutally murdered by police. This week, they weep silently for the family they have lost back home. This middle place they’ve come to reminds them they are not wanted—and still, all everyone offers is prayer.

What happens when the prayers are not enough?

MORE: Why we can’t trust the SIU to probe Abdi’s death

After every death, every drought, every instance of violence, I am hard-pressed to feel grateful that Somalis are granted prayers. We did not get here all by ourselves. We get up and face the onslaught: “Your community again? But how are you feeling?” The answer does not change, and the emotions are the same each time: grief, relief guilt, fatigue, rage, frustration.

We will pray for Somalia, politicians tell us; we will not forget you. But you can not forget those you do not remember. The City of Toronto may light the Toronto sign blue and white, but Mayor John Tory rarely makes commitments to address the violence that lies at the doorsteps of Somali communities.

Somali-British poet Warsan Shire reminds us that “in Somali, when we see injustice, we say ‘dhiiga kuma dhaqaaqo?’ which translates into ‘does your blood not move?’ ”

Can your blood not be moved?

For those of you who are willing to pray and willing to gather in vigil, try something different. Call out false narratives of terror and deficit when you see them. Ask the Ontario Ministry of Children and Youth Services what specific long-term and sustainable services they are allocating to Somali youth in Ontario. Pressure the Toronto Police Services, Ontario Provincial Police and the RCMP to appropriately investigate the deaths of young Somali men. Stand in the streets when we tell you the Minister of Immigration has deported us. Pay attention to the counter violent extremism programs that criminalize Somali youth that are being funded by Public Safety and Emergency Preparedness Canada.