Canada is not broken

Scott Gilmore: Despite our flaws and constant challenges, we live in what is arguably among the least broken countries in human history 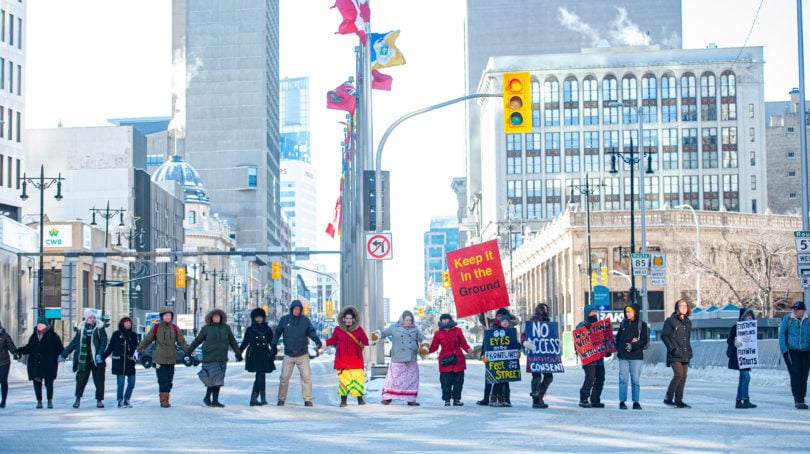 Supporters of the Wet'suwet'en nation's protest march in Winnipeg on Jan. 10, 2020 (THE CANADIAN PRESS/Mike Sudoma)

Here is the National Post’s headline this morning: “‘Canada is broken’ says majority of Canadians”. It is the lead story and it goes on to explain that a poll by DART & Maru/Blue (a brand name that sort of just rolls off the tongue) found that 59  per cent of Canadians believe the country is not headed in the right direction. And, 69 per cent believe the country is “broken”.

Another way of describing that poll result could be, “Over two thirds of Canadians have no idea the country has never had it so good”.

Just a few weeks ago, the US News & World report named Canada as the second best country in the world. The annual survey tabulated a variety of factors, including overall quality of life—where Canada was ranked first.

They are not alone. The OECD’s “Better Life Index” also ranks Canada as one of the best countries in the world for well-being. Their data finds us doing especially well in terms of life satisfaction, health and economics.

Speaking of jobs, the right wing Heritage Foundation in Washington continually ranks Canada as having one of the most free economies in the world, citing our government integrity, low taxation levels and fiscal health.

Why? Probably because it is so easy to start and run a business in Canada. The World Bank’s annual Doing Business rankings find that our low level of regulations, lack of corruption, and access to finance (among other things), make this country the third best in the world for entrepreneurs who want to launch a new company.

That lack of corruption might have something to do with our stable political environment. How stable? The Economist Intelligence Unit ranks Canada as one of the most democratic countries on earth. They rank us far above the United States and most of Europe.

Press freedom? Reporters Without Borders ranks us among the best. The Canadian Brand? Some indexes rank us as number five in the world. Others say we are number one. Global competitiveness? Doing great. Overall happiness? We are among the top 10 again this year.

“Our health care system is broken!” you shout. Sure. Which is why our life expectancy is one of the highest in the world, better than the United States, the United Kingdom, Germany and Ireland.

“But the Liberals are terrible!” You have a point. And, because this is one of the healthiest  democracies in the world, soon there will be a free and fair election and you can toss them out so they can be replaced by the Conservatives who will then be terrible in an entirely different way.

“The blockades!” You mean the democratic demonstrations that are being peacefully managed by our professional (and accountable) police forces?

“Our First Nations!” Yes, we need reconciliation, a new social compact with Indigenous Canadians, better infrastructure in the north, and a solution to a dozen other critical shortcomings. And, we as a nation are trying to find those solutions. We get it wrong, we stumble, we often don’t try nearly as hard as we should. But we try. Every government provincially and federally (even the ones you hate) sincerely sees this is a problem and is working peacefully towards a solution. Compare that to any other time in our history, or any other country in the world that faces similar problems.

This country is not broken. It is arguably among the least broken countries in human history. It seems like a paradox, but we continually fail and falter our way to success.  We bumble along, doing everything wrong from military procurement to hockey. Our Premiers will not talk to our Prime Ministers, our economies crash and boom. Our politicians are idiots, corrupt and clueless. The media is fake. The French can’t stand the English. We’re racist and sexist. It’s too cold.

And yet—here we are. Doing pretty damn well. Better than well, actually. Incredibly, we’re doing fantastic. And the most incredible thing of all is that most of us have no idea.

So, do this. Get off the internet. Go outside. Take a look around. Talk to your neighbour. Breathe the air. Pause for a moment to actually consider how well we are doing. And then, after you’ve taken a deep breath, appreciate the fact that while we can do so much better, what we already have is pretty damn good. And appreciate it.