Canada is one of the most socially mobile countries in the world. Here's why.

Maclean's Editorial: Canada is doing well on social-fluidity measures, like the 'Great Gatsby' curve. But challenges remain—and so we beat on, boats against the current 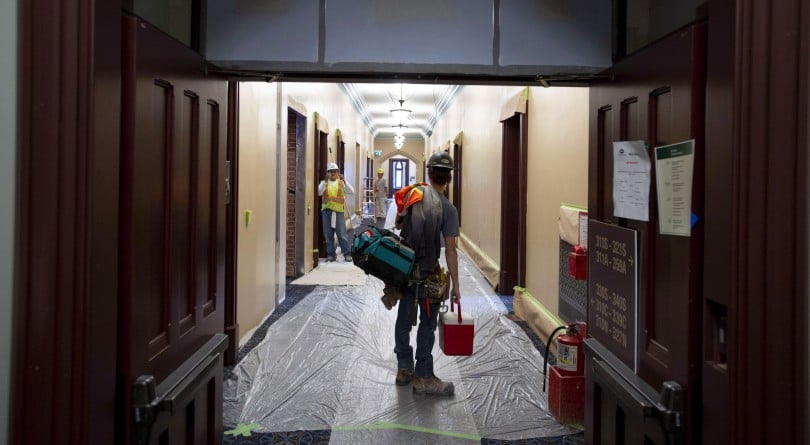 Workers painting a corridor of the renovated West Block on Parliament Hill in Ottawa on Friday, June 15, 2018. (Justin Tang/CP)

When economic policy talk turns to social mobility these days, it has become popular to point to the “Great Gatsby curve,” a figure that compares countries in terms of earnings mobility and income inequality, and thus charts the opportunity to rise from poverty to wealth. But while the title is taken from F. Scott Fitzgerald’s famous American novel about the rags-to-riches story of Jazz Age tycoon Jay Gatsby, given Canada’s recent performance in international comparisons of social mobility, perhaps it ought to be renamed the Duddy Kravitz curve in honour of our own great fictional striver created by Canadian novelist Mordecai Richler.

The opportunity to better your economic status through hard work and ability is a crucial component of any fair and functional society. This summer, the Organisation for Economic Co-operation and Development (OECD) took a close look at the issue across its 35 member countries. Its report, titled “A Broken Social Elevator? How to Promote Social Mobility,” compares mobility in numerous ways. And across most measures, Canada shines for its remarkable ability to facilitate movement up and down the social ladder, unhindered by class or wealth.

In terms of the absolute degree of social fluidity, Canada is ranked first in the world by the OECD. Nearly three-quarters of Canadians aged 25 to 64 were in a different social class than their parents between 2002 and 2014. And while moving up is obviously more desirable than slipping down—who wants to be less well-off than their parents?—adjustments in both directions are an important indicator of a truly egalitarian and meritorious society. Canada is the only country, for example, where the children of a manual worker are as likely to grow up to be managers as they are to be manual workers themselves. Across many other indicators of social mobility, the OECD generally ranks Canada in a tight cluster with Nordic countries such as Norway, Finland and Denmark as the world’s most mobile societies.

In comparison with traditional peer countries such as the United States or Great Britain, Canada displays a far less rigid class structure. The odds of moving from poverty to the middle class during an individual’s lifetime are twice as good for a Canadian as they are for an American. The fact that Canadians enjoy Scandinavian levels of equity without having to rely on Scandinavian levels of taxation or social conformity is further testament to the importance of Canada’s education, health care and welfare systems, as well as the country’s commitment to welcoming newcomers.

The OECD study also reveals that “Canada shows a greater degree of health mobility” than peer countries; in other words, poor parental health is not a substantial burden on the health of children, as is the case elsewhere. And although parents’ education is always important in determining the educational path of offspring, it is significantly less so in Canada than in other OECD countries. Taken as a whole, these results suggest ability and effort will get you further in Canada than almost any other place on earth.

There are, of course, some aspects of social mobility that still require close attention in Canada. There is substantial “stickiness” for those born at the top of the income spectrum; most of the downward movement involves those exiting the middle class. And University of Ottawa statistician Miles Corak (whose work inspired the concept of the Great Gatsby curve) recently revealed some important geographic determinants of mobility across Canada. Rural Manitoba, for example, displays significantly less mobility than the rest of the country. This is likely due to a lack of economic opportunity in remote parts of Canada, as well as on some Indigenous reserves—topics that require serious attention to ensure all Canadians have the necessary opportunities for advancement.

Social mobility is never a completed process. As with Richler’s Kravitz, moving up in the world requires eternal optimism—and plenty of hard work.

MORE ABOUT THE EDITORIAL: