Jenn Jefferys: To shrug it off as a threat that died along with Trump’s presidency, or as a purely American ailment, is as dangerous as it is apathetic 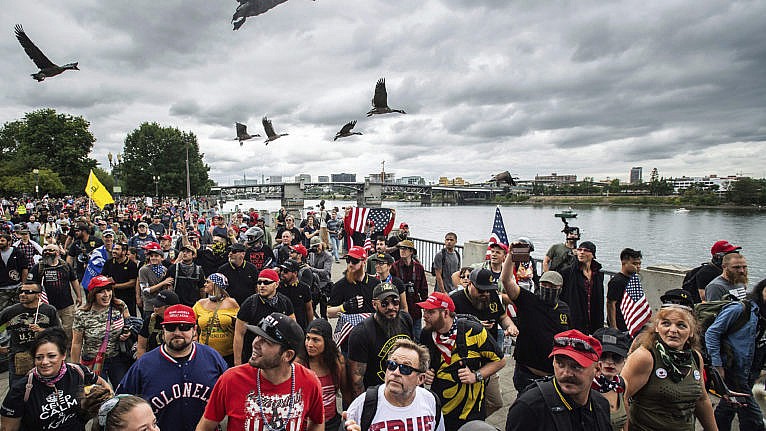 Members of the Proud Boys and other right-wing demonstrators during an "End Domestic Terrorism" rally in Portland, Ore., on Aug. 17, 2019 (Noah Berger/AP/CP)

In late January, a 66-year-old white man carrying 36 knives and plotting to “execute” politicians in advance of Newfoundland’s provincial election was only narrowly thwarted by Deer Lake police following a high-speed car chase. He was a Trump supporter, according to his Facebook history, and his hope was to “stop the election.” Sound familiar?

This story barely made a blip on Canada’s national radar when it happened. But it points to a worrying trend that’s shown no signs of slowing down since the Jan. 6 insurrection in the U.S. Capitol. The Canadian Anti-Hate Network (CAN) says many Canadian right-wing extremists were inspired by what they saw that day and have wanted to hold similar events in Canada. Thanks in large part to Donald Trump, these once fragmented groups are now actively organizing across generations and borders, united as “patriots” in what they see as civil war.

The world needs to brace itself for the next chapter of far-right extremism, Daryl Johnson, a domestic terrorism expert and former senior analyst with the U.S. Department of Homeland Security, tells me. “The people you saw in Washington on Jan. 6 are just regrouping now. They’re just waiting until the guard’s down.” Johnson doubts Canadians will ever see violence on the same scale as the United States but warns that far-right extremism remains a serious threat to public safety here.

Young white men have traditionally held the reins of these movements. But it would be a mistake to see this problem as exclusively white and male. White nationalist movements have successfully recruited racialized folks as active contributors, often former military members or law enforcement. The director of Canada’s Centre on Hate, Bias and Extremism, Barbara Perry, says the face of hate in Canada and around the world is changing. More minorities are joining up and so are more women.

“The ‘movement’ on the Capitol was much more diverse and much more animated by anti-statism and anti-authority sentiment than other incidents,” Perry says. “It was coloured as much by a belief in a broken system as by nationalism.”

To shrug this off as a threat that died along with Trump’s presidency, or as a purely American ailment, is as dangerous as it is apathetic. Canadians love to draw false dichotomies with our American neighbours. We’ve long claimed that we’re more polite or more civilized (debatable). That we don’t export far-right extremism or violent misogyny (we do); that our public institutions, like our news media, aren’t structured in such a way to benefit one race over another (they are); that Black folks aren’t killed by Canadian cops (they are); or that Indigenous people aren’t surveilled by the state (they are).

Thankfully, no assassinations of public officials have happened since our former clerk of the privy council, Michael Wernick, warned in 2019 that political toxicity could lead to someone getting shot. Although, it was only a year later, in July 2020, when a Canadian Forces reservist crashed his Dodge Ram through the front gates of Rideau Hall, with plans to “have the Prime Minister arrested.” He was carrying a small arsenal of weapons in his vehicle.

READ: What’s in store for a post-Trump America? An Idaho town may have the answer.

Canada’s public safety minister, Bill Blair, announced in February that Canada would be expanding its list of terror groups to include more white nationalists. Johnson doubts this will yield much impact: “It’s more of a symbolic gesture.” What’s likely to happen now, Johnson tells me, is that groups like the Proud Boys will simply disband, rebrand and resurface under a new name. In other words, none of this is likely to pose an existential threat to any far-right extremist organizing.

It doesn’t help that disinformation remains rampant online, disseminated through social media, podcasts and the dark web, while tech giants refuse to make substantive effort to slow the spread. One need only look to the groundswell of support for groups like Hugs Over Masks or The Line to see the sheer number of people refusing to follow basic public health guidelines because they’re convinced masks infringe on their civil liberties.

At his first major public appearance since leaving the White House at the Conservative Political Action Conference (CPAC) in late February, Trump spoke of several trendy right-wing preoccupations like free speech and cancel culture and hinted (again) that he plans to run in 2024. He also said it was “impossible” he could have lost the election, which was received with an impassioned chant from the conference floor: “YOU WON! YOU WON! YOU WON!”

In many ways, he did.

This column appears in print in the May 2021 issue of Maclean’s magazine with the headline, “The gathering storm.” Subscribe to the monthly print magazine here.