Stephen Maher: There are ways Canada can help around the world. But we should recognize that we do not make good occupying soldiers and stop trying to do it. 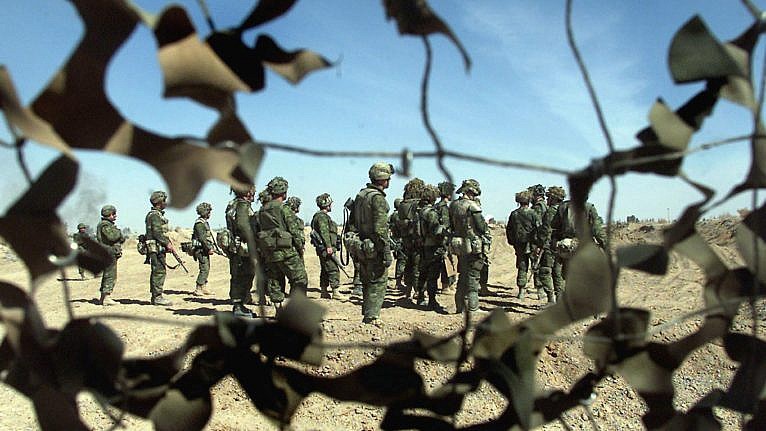 Canadian soldiers survey defensive positions they will eventually take over from the U.S. 101st Airborne at the airbase in Kandahar, Afghanistan on Feb. 10, 2002 (Kevin Frayer/CP)

In 2013, I had dinner with a couple of former special forces operators at Le Bistro, the best French restaurant in Kabul, a casual place with a pleasant courtyard and pretty good food. It was a welcome respite from the hostile city outside, the worst place I have ever been—a dusty maze of blast walls, armoured vehicles and check-points manned by hawk-faced soldiers holding Kalashnikovs.

I was there on a week-long reporting trip, paid for by NATO, to show the work our allies were doing to prepare the Afghan military for a drawdown of foreign forces—work that this week we learned was all in vain.

We were fed a lot of earnest propaganda—briefings from impressive NATO officers with PowerPoints full of unintelligible acronyms cheerfully discussing logistics and training, while outside the base the mission was inexorably failing.

The retired soldiers I had dinner with, who were not working for NATO, were less optimistic. One of them was a Russian who had served in Soviet special forces when that country was fighting the mujahideen, the beta version of the Taliban. He did not think things were going well for NATO, and said that the NATO soldiers were too distant from the people to be effective.

“When we were here, we ate off the same plates as the Afghans,” he said.

He told me Russian soldiers lived among the Afghans, unlike the NATO soldiers, whose bases were surrounded by vast concrete blast walls and elaborate checkpoints meant to stop the Taliban truck bombs.

The Soviets, who were prepared to take higher casualties than NATO, lost 15,000 people in Afghanistan before they were worn down by the Mujahideen, just as NATO was eventually worn down by the Taliban.

The grim mathematics of invasions dictate that the invaders can’t bear to sustain as much pain as the insurgents can. “You can kill 10 of our men for every one we kill of yours,” Viet Cong leader Ho Chi Minh warned the French in 1946, “But even at those odds, you will lose and we will win.” He was right. The Viet Cong beat the French and then the Americans.

The math was about the same in Afghanistan. NATO lost 3,592 troops, including 158 Canadians. Afghan government forces lost 66,000. The Taliban lost an estimated 52,000.

In this era of instant media reports and comfortable, risk-averse populations in the West, voters will not support sustained occupations because we can’t take the losses. For that reason, for the decades after their humiliating defeat in Vietnam, the Americans preferred to drop bombs and not deploy troops.

“Bomber pilots don’t have mothers,” is the Pentagon catchphrase used to explain the political calculus behind the preference for air strikes.

While I was in Kabul, I visited the Armed Forces ­Academy of Medical Sciences, a military training hospital where Canadian Armed Forces medical personnel were helping Afghans build the capacity to look after their wounded soldiers.

The doctors and nurses—an impressive group doing important work—showed us around one facility and then took us across the hospital’s campus to another building. To cross the compound, in the middle of Kabul, many kilometres from any battlefield, we all had to put on flak jackets and be escorted by armed Canadian soldiers.

After travelling around the city in unarmoured vehicles under the protection of one bored guy with an AK-47, it was shocking to suddenly find ourselves in the custody of the Canadian Forces, following risk protocols that seemed absurd. It was worse for our staff at the Canadian embassy, who were basically forbidden from leaving the heavily guarded compound.

Our fundamental expectations as Canadians do not prepare us well for military duty in places like Afghanistan. We value the lives of our soldiers and civilians too highly to put them in harm’s way. That says something great about this blessed country, but it does not make us effective in the nasty business of invading other countries and imposing our will on foreigners.

There are lots of things we can do to help people around the world. I have never been as proud of my country as I was watching Canadian sailors and civilians helping Haitians after the 2010 earthquake. But we should recognize that we do not make the best occupying soldiers and stop trying to do it.

This is not to say a single thing against the 40,000 Canadians who bravely served in Afghanistan. I have friends who will spend the rest of their lives dealing with the injuries they sustained there. They are heroes. But we should not have sent them there and we should be more skeptical in the future than we were in 2001 when the Americans asked us to join their adventure.

More than 38,000 Afghan civilians died during the 20-year war, and for what? It was all a terrible mistake, and the horrific scenes in the Kabul airport—the poor souls plunging to their deaths after holding onto the undercarriage of a departing plane—are just the start. NATO held off the Taliban for 20 years, and now they are back, and will no doubt be once again resuming their autogenicidal ways while the government of Pakistan cheers them on and NATO’s enemies laugh.

We are trying to get our Afghan interpreters and guards out—there are frantic Canadian veterans putting everything they have into getting them to the airport and onto planes to safety. It is horrible to think of what will happen if we fail them.

Who can argue that we made the right decision when we decided to participate in this disaster back in 2001?

But I find it hard to blame Jean Chretien much for signing us up to this horror show. I don’t think Canada had much of a choice, politically, but to go along with the Americans. We should remember this, though, forever.

George W. Bush and his men—Dick Cheney, Paul Wolfowitz, Donald Rumsfeld and David Frum—suffering from imperial myopia—ignored the lessons of history and believed that smart bombs had changed everything.

In 2004, in his book, An End to Evil, Frum mocked those who warned that Iraq and Afghanistan would end badly. “In Afghanistan, U.S. troops astonished the world with a whole new kind of war on land and in the air,” he wrote. “In Iraq, U.S. forces overthrew Saddam Hussein’s entire regime with half the troops and in half the time it took merely to shove Saddam out of Kuwait in 1991. It did not matter: The gloomsayers were unembarrassable.”

The next time someone proposes we send Canadians to fight in a place like Afghanistan, we should remember this disgraceful failure, remember our maimed and fallen, remember the allies we abandoned, and say No. Sorry. No.