Tabatha Southey: Clean energy attracts billions in investment every year, employs many thousands of Canadians, and grows more than the rest of the economy. Why doesn't Canada care? 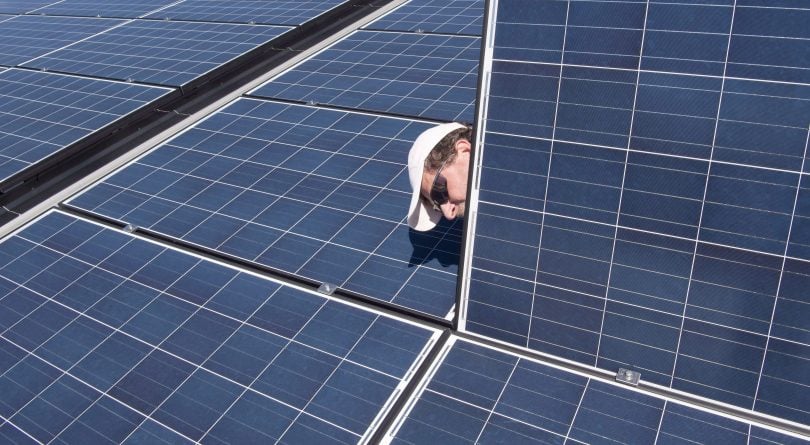 Jason Andriulaitis checks a connection under a new solar panel installation in Scugog, Ont. on Wednesday, April 27, 2016. Installing solar panels already makes sense for most homeowners in Saskatchewan and Ontario but the abundance of cheap hydroelectricity in Quebec and Manitoba means solar power may never make much economic sense in those provinces. (Frank Gunn/CP)

This week, a barn burner of a report was released into an increasingly flammable world by Clean Energy Canada, a non-profit think tank based out of Vancouver’s Simon Fraser University. The report revealed that Canada’s clean energy sector is growing faster than the rest of the country’s economy. It turns out that the clean energy sector—arguably the unsexy sector that we don’t even notice—grew a full third, percentage-wise, more than the wider economy between 2010 and 2017.

On top of that, the clean energy sector is attracting tens of billions of dollars in investment every year, with investment rising by 70 per cent between 2010 and 2017, and $35 billion pouring in in 2017.

As of 2017, 298,000 Canadians (more than 26,000 in Alberta alone) were employed in Canada’s clean energy sector, which currently represents 3 per cent of Canada’s GDP,  or around $57 billion in 2017. For context, the direct contribution of agriculture, fishing, hunting and forestry to our nation’s economy was 2.1 per cent, and of the hotel and restaurant industry, 2.3 per cent.

READ MORE: It’s time to leverage Canada’s energy advantage into a geopolitical one, too

The report was compiled from data brought to the table by B.C.-based Navius Research, which used its  extensive experience in the green sector to determine what reasonably constitutes a green enterprise and measure the contributions those companies make to the economy. Weeding out the merely green-leaning, or green-tinted, it included only firms whose primary business was—either through the improvement of energy efficiency or in energy production—clean energy.

In the words of Merran Smith, executive director of Clean Energy Canada, “Put simply,” the green sector is “made up of companies and jobs that help to reduce carbon pollution—whether by creating clean energy, helping move it, reducing energy consumption, or making low-carbon technologies.”

That criteria suggests a novel way of thinking. We’re basically learning a whole new classification system here because the green sector bands together a wide range of companies. Clean transport was the largest green employer, providing 58 per cent of those jobs in 2017. Renewable energy supply currently provides 40 per cent of the green sector’s GDP contribution, and while we might sort these businesses into the “transport sector” and the “energy sector” respectively and not invite them to the same parties, they are nevertheless both in the business of ensuring that Waterworld never becomes culturally relevant.

We don’t hear much about the success story that is clean energy, in part because it’s a low-drama “dog affectionately cuddles up to man” story, being largely a tale of quietly taken opportunity, usually earned after a long, long walk. More complicated still, viewed broadly, it is “many different breeds of dogs cuddle up to many different people” story. Tying all those narratives together into one big picture can be tricky, but that’s what the Clean Energy Canada report effectively does.

The report reveals a clean energy sector made up of large global companies, family-run businesses and small tech start-ups. Together they employ both white- and blue- collar workers, a lot of them. While fighting climate change is frequently presented as a zero-sum game of environment vs. economy, the truth is that green technology innovation and the economy can get along like a zero carbon house no longer threatened by an increase in the severity and frequency of forest fires.

The aim of the report is to raise the profile of our humble clean energy sector. There’s affordable, indeed exportable, innovation in them thar hills and it would benefit us, and not just the planet, to pay more attention to what’s on offer and in development.

Climate change is real, but beyond those who continue to deny that truth lie those who insist that “It’s OK, because humans will adapt.” Just not in any way that involves not mining coal for a living anymore, thanks very much. These people seem to think it’ll be easier to grow gills in a few generations than find a new line of work as people have, historically, often found new lines of work when the market and other conditions demanded it.

Think back to the war effort. Don’t be the person not saving your scraps, or at least not weatherstripping your windows, for victory here, people.

READ MORE: Bill McKibben on how we might avert climate change suicide

I’m not sure how we build the same mythology around green energy jobs that exists around the fossil fuel and mining industries. Maybe we need to find a network willing to produce a prime-time television soap opera revolving around a very wealthy, highly dysfunctional family that owns and operates an independent renewable energy company.

The family doesn’t own vast tracts of land in Texas, or anything. Instead, their fortune is rooted in the fact that their shoulder pads all have solar panels mounted on them and each shoulder produces enough clean, sustainable energy to power the titular city, Surrey.

Perhaps there is indeed no such thing as bad publicity. Could we get some windmill-Valdezes to spill black food colouring all over the local wildlife?

In conversation, let’s borrow some of the cultural cachet that is currently, almost exclusively, in the hands of the oil industry. After all, what is solar power if not lots and lots of pipelines coming down from the sun?

Start lobbying like the big boys, let’s see if we can get “Energy Efficiency” branded as a food group. Look, it worked for dairy.

In all the bad news, this is a hopeful story but, hey Canada, have you hugged, or at least acknowledged, your clean energy sector today?