Cherie Wong and Jody Chan: While the Liberal government ignores the nuances in the Chinese community fabric, we have also been abandoned by the New Democratic Party and the Greens over petty partisanship 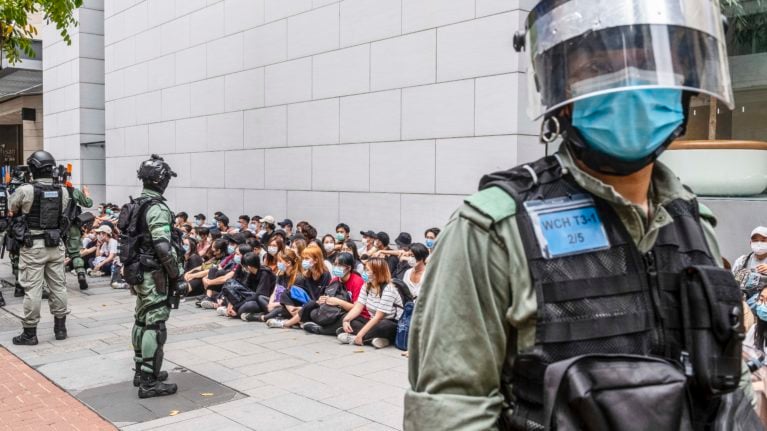 A large group of detainees are seen sitting on the ground in Hong Kong, China, 27 May 2020. Beijing plans to impose a national security law on the city banning sedition, secession and subversion through a method that could bypass Hong Kong's legislature. (Miguel Candela/EPA/CP)

We feel alone. As progressives, human rights activists and Hong Kong pro-democracy supporters, we have been abandoned by the left. Whether we are discussing the treatments of Uyghurs, Tibetans, Hongkongers, Falun Gong practitioners or Chinese by the hands of the Chinese Communist regime, we are left behind by our fellow progressives, the supposed human rights champions.

We thought our community would be there behind us as we lend our voices to those suffering under the Chinese Communist Party (CCP). While the Liberal government chooses to ignore the nuances in the Chinese community fabric, we have also been abandoned by the New Democratic Party and the Greens over petty partisanship.

Our community is facing relentless persecution. We have friends and family who were beaten and shot on the streets in Hong Kong. We know children who were dragged away and arrested on groundless claims. Protesters are tortured, raped in custody and denied due process. We watch as the criminal “justice” system crumbles. A young woman who was gang-raped while in custody is currently facing arrest for “making a false statement”. Thousands of protestors have been arrested, and not a single police officer has been charged with misconduct.

MORE: The fight for a free Hong Kong isn’t over just because Canada wants no part of it

While the Chinese Communist Party is trying to circumvent Hong Kong’s legal processes with a national security law, infringing on everything from politics, technology, ideology and religion, experts are worried that criticism of the Chinese Communist Party’s actions will be criminalized. This direct breach of the Sino-British Joint Declaration undermines the “one country, two systems” that was promised in the 1997 handover and will allow the same Chinese national security entities that have cracked down on the Tibetans and the Uyghurs to establish branches in Hong Kong, and to intervene in law enforcement.

Who will stand up for us?

MORE: In the battle over Hong Kong, the surveillance state knows no boundaries

It is clear to us that the Liberal government is only interested in upholding the status quo. Whether on issues of Uyghur concentration camps in East Turkestan or democratic struggles in Hong Kong, our prime minister and foreign affairs minister are even dodging the word “condemn.”

One can argue that Canada can’t do much, that the situation is complex, that we need international alliances to be effective. But when we look at Australia and Japan, who are in a similar circumstance as Canada, they are beginning to lessen their nation’s dependence on the authoritarian regime. We need to start rethinking our relationships with authoritarian regimes, to be less beholden to their rules of engagement, and to find our backbones and speak up against injustice, whether it is Saudi Arabia or the Chinese Communist Party.

As voices of dissents are snuffed out in Canada, we are left with an unexpected ally. This week, the Conservative Party proposed a motion to further assess the evolving situation with Hong Kong’s pro-democracy activists by reconvening the special committee on Canada-China Relations. The move was rejected by the Liberals, NDPs and Greens, and so we ask those parties: How dare you?

This is undoubtedly a partisan decision; one that is clouded by fear of alignment with Trumpian rhetoric that is often echoed by the Conservatives, and misconstrued by the fear of being called a racist by criticizing the Chinese Communist Party. When you equate criticizing a political party with criticizing its citizens that is racist. It is incredibly naive to believe that 1.3 billion people share the same political views as the Chinese state.

Progressive politicians talk a big game about their support for social justice and human rights, but they only speak when it’s convenient for their political agendas. In this case, when we looked for leadership from the left, we found empty talk and no concrete policy changes.

While our community has found champions in the Conservatives’ movement, we need to work across party lines. It is important for politicians to realize the struggle in Hong Kong is not a partisan issue. The silence from the left has been deafening.