Opinion: MPs have voted to ask the Pope to apologize for the Catholic Church's role in residential schools—and it's due time he did the right thing 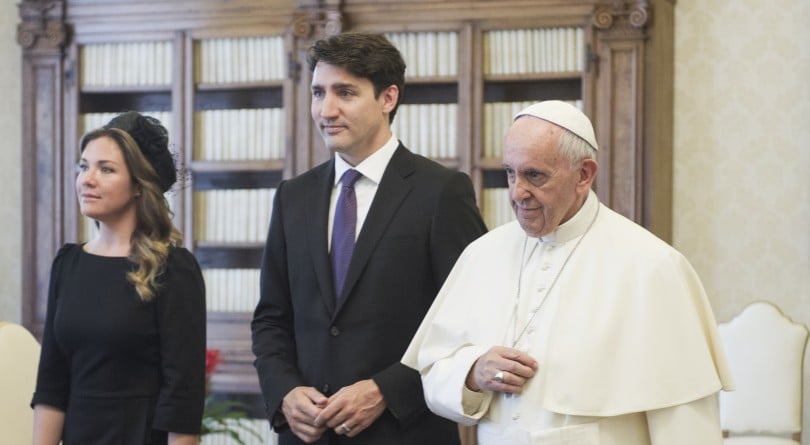 The concept of apology is at the heart of Christianity. It’s right there in the Bible: “If we confess our sins, he is faithful and just and will forgive us our sins,” says St. John. In other words, Christians may get things wrong—and may even commit terrible crimes—but acknowledgement of those errors, and genuine contrition, leads to forgiveness and a clean record.

Which makes it all the more galling that Pope Francis has continued to decline to formally apologize for his church’s involvement in the grotesque treatment of Indigenous children in the residential school system. Such an apology was one of the 94 recommendations from the Truth and Reconciliation Commission, and the ask was repeated and requested by Prime Minister Justin Trudeau when he met with Pope Francis in March. He refused, and now Parliament has voted by a margin of 269-10 to formally invite the Pope to rethink his position. That’s a polite way of insisting—and such an insistence from Ottawa is virtually unprecedented.

The decision has limited legal and constitutional weight, of course, but enormous emotional and political value. If Rome continues to withhold its apology, the optics will be severe. And even if it produces no results, it still exposes a church in crisis.

Up until now, Francis has said he takes the issue “seriously,” but that “after carefully considering the request and extensive dialogue with the bishops of Canada, he felt that he could not personally respond.” That’s a pretty weak, and even dismissive response, but it’s in keeping with the Catholic Church’s approach; in 1991, the Canadian Bishops said, “We are sorry and deeply regret the pain, suffering and alienation that so many experienced” at the residential schools, and in 1993, they added that “various types of abuse experienced at some residential schools have moved us to a profound examination of conscience as a Church.” It’s all soaked in euphemism and clearly the product of legal vetting.

READ MORE: 2018 will be the year of the polarized church

The essence of the Roman Catholic argument is that an individual diocese may apologize, but not the Vatican. The problem is that Roman Catholicism is centred on a supreme authority, and an apology from that authority is considered by Indigenous people to be essential. The Church, however, is terrified of the financial and legal repercussions.

Indeed, the Roman Catholic Church has also been asked to fulfil its financial obligations under the Indian Residential Schools Settlement Agreement, and to raise $25-million for Indigenous healing, as demanded in the residential schools settlement of 2007. It has not come through.

The Church’s Canadian champions are not helping. Sherwood Park—Fort Saskatchewan MP Garnett Genuis, for instance, said on Twitter that “Catholic entities involved in residential schools have apologized. The Holy See is responsible for next steps, & people are welcome to make their own judgments. It is not for Parliament to call out or dictate to one faith community.” But this misses the point by a holy mile: None of the churches involved in the residential school catastrophe acted autonomously, and all of them were in partnership or in cooperation with the state. Parliament is not asking for the Catholic Church to apologize for what it did as a religious body, but what it did as a church acting partly as an organ of the state.

The government has already apologized, as have other churches. “We imposed our civilization as a condition of accepting the gospel. We tried to make you be like us and in so doing we helped to destroy the vision that made you what you were,” said the Right Rev. Bob Smith in a United Church General Council statement in 1986. “We ask you to forgive us and to walk together with us in the Spirit of Christ so that our peoples may be blessed and God’s creation healed.”

And seven years later, Archbishop Michael Peers, Primate of the Anglican Church of Canada, issued a profoundly moving document: “I accept and I confess before God and you, our failures in the residential schools. We failed you. We failed ourselves. We failed God … I am sorry, more than I can say, that we tried to remake you in our image, taking from you your language and the signs of your identity.”

Now it’s up to Pope Francis, for whom this represents another moment of truth as he swings once more between exuberant liberalism and strange stubbornness. Earlier this year in Chile, for example, he refused to apologize for the Church’s history of abuse, and even criticized some of those who complained about what had happened to them. He later offered an apology, but only after an agonizing hiatus for the victims and a fierce reaction from the Chilean public. And while he has sometimes appeared as a compassionate reformer on LGBTQ issues, he’s also given his blessing to a document that makes it impossible for even a celibate gay man to enter a seminary.

It’s time for Pope Francis to make himself clear, once and for all, or risk the Church appearing to retreat back into the closed and frightened place it once occupied. There is much that is enlightened and compassionate about Catholic teaching, and it is those things—rather than its tendency toward being defensive and litigious—that need to be emphasized at this crucial juncture.

The Roman Catholic Church acted far too slowly, and sometimes callously, when the sexual abuse crisis was exposed. On residential schools, it has a clear choice, and it’s one that it has to get right—for the Indigenous people of this country, but also for itself.