Canada's peacekeeping mission to Mali could become a new Afghanistan

Opinion: There is no peace to keep in Mali, and the UN mission there has become a deadly quagmire—one that Canada might be wise to just avoid 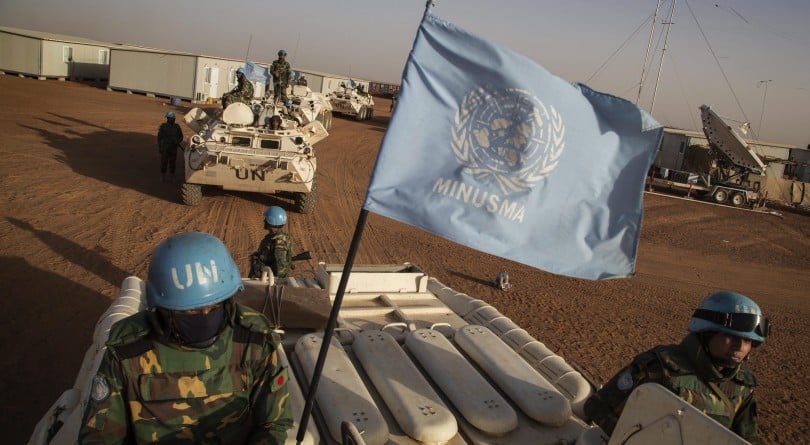 In this Feb. 25, 2015 photo provided by the United Nations, UN peacekeepers from Bangladesh arrive at the Niger Battalion Base in Ansongo, in eastern Mali. (Marco Dormino/United Nations via AP)

“Canada is back,” Justin Trudeau said when his Liberals won the 2015 election. After years in the wilderness on peacekeeping, he said, Canada would be returning to its heritage as a leader in peacekeeping missions, promising to commit up to $400 million and 600 Canadian Armed Forces personnel to UN peace operations.

But his Liberal government has hit a significant road bump along the way: The most recent figures from the United Nations have found that Canada’s peacekeeping commitment has reached an all-time low. The government said it was looking for a mission that would be the right fit.

WATCH: Canada’s peacekeeping mission in Mali: Who’s fighting and why

In March, after the United Nations sent a formal request for a military contribution to its ongoing mission in Mali (MINUSMA)—established in April of 2013 with a mandate to “support the transitional authorities of Mali in the stabilization of the country and implementation of the transitional roadmap”—the government announced that it had found the right mission. Canada offered up six helicopters—four light utility “Griffons” and two twin-rotor “Chinook” transports—and approximately 250 military personnel (and up to 600) to MINUSMA.

But the UN was quick with its assessment. In mid-April, the UN said that the Canadian force was not robust enough to meet the increasing demands of what is being described as the UN’s most dangerous mission, saying that Canada needed more helicopters to assure a minimum of two transport aircraft and two escort helicopters at short notice. The current German contingent employs four armed utility helicopters and four transports with over 900 support personnel, while the Dutch, who the Germans replaced, used four Apache attack helicopters and three Chinook transports; both contingents lost a helicopter due to accidents Nevertheless, the helicopters and personnel were reportedly set to be deployed later this summer, though Canada now appears to be hemming and hawing as the UN calls for Canada to meet its deadlines.

But even beyond Canada’s seeming unpreparedness, and the pressure to bolster its peacekeeping efforts, there are red flags all over the mission. The situation in Mali strongly resembles the conflict in Afghanistan, a mission marked by mission creep and escalating risk. Ethnically divided, with a weak central government and borders that are not respected or controllable, Mali is confronted by a radical opponent that will use any level of violence against all manner of victims. Canada’s desire to participate in future UN peace support missions must be tempered by careful situation analysis and adequate risk mitigation, or they risk blundering into a dangerous mission like MINUSMA—a toxic situation that Canada would be wise to avoid.

The history of the violent conflict between the impoverished northern and affluent southern parts of Mali is long, with a traceable history going back to the 13th century. This most recent issue, according to the Clingendael Institute—which has charted the break-up between north and south—stems from the French period of colonization when the northern Tuareg and nomadic Arab communities were virtually excluded from plans for post-colonial rule on June 20, 1960. From that point onward, the Tuareg have had only a few seats in the Malian assembly. The first-ever Arab, Zahabi Ould Sidi Mohamed, was elected in 2013.

From 1960 to 2012, there were four Tuareg rebellions and five different peace agreements. The use of the French military to force the sides apart has been a recurring theme, and the deployment of France’s notorious Foreign Legion—whose heavy-handed use of force in this part of the world is legendary—only sharpens the resentment of the northerners.

The most recent peace accord, sponsored by Algeria, was signed in 2015, but the violence since then has been almost constant. Neither side respects the agreement. The arrival of al-Qaeda in the Sahel to bolster the northerners has provoked a significant escalation in the type of attacks being staged, while also broadening the issues at stake; indeed, the Malian situation is only part of the bigger social and economic problems that stretch across the entire region. The International Crisis Group (ICG) report for 2017 postulated the Sahel as the zone of conflict between forces from Saharan Africa and the non-Arab agrarian south.

The trend lines in Mali do not auger well for Canada’s peacekeeping aspirations. The ICG’s 2018 Watch List Report describes strengthening insurgencies in parts of Mali, Burkina Faso and Niger. Jihadi groups are exploiting the situation to establish secure operating areas and find new recruits. The ICG maintains that the Bamako Peace agreement of June 2015 has stalled, and crop failure and food shortages are only exacerbating the ethnic tensions.

These are huge, historical issues, and if disentangling them seems like an outsize task for Canadians who still value the peacekeeping tradition, the UN’s recent history of expanding the mission mandate should be particularly worrisome. In Kevin Sieff’s reporting for the Washington Post in February, he explains how the arrival of 11,000 U.N. troops in 2013 was intended only to bolster the fledgling peace deal and train the Malian army. But in June 2014, the UN added a long list of further duties, including: “ensuring security, stabilization and protection of civilians; supporting national political dialogue and reconciliation; and assisting the reestablishment of State authority, the rebuilding of the security sector, and the promotion and protection of human rights in that country.” These complicated responsibilities tasks carry a far heavier burden of responsibility for the use of force. The mission has grown, as a result, and its current strength is set at 15,425 personnel, comprising mostly 13,289 military and 1,920 police. The annual budget is USD$1.048 billion.

The biggest problem is that MINUSMA does not have the capabilities for the type of threat they face. “We are gathering the intelligence, but we lack the forces­ who can act on that information,” the mission’s chief of intelligence, Swedish Lt.-Colonel Per Wilson, told Sieff. And after a visit to Mali, Prof. Walter Dorn of the Royal Military College in Kingston told the CBC “the UN mission is struggling, but is making a difference on the ground… The Mali government is struggling to exert control over the wild territories in the north.” The successes, so far, have been limited—and the risks are great.

The need for more robust military capabilities led the UN to approve cooperation between the French military and the UN mission. Resolution 2364 (2017) expanded MINUSMA to its current limits and added the additional tasks of “providing operational and logistical support to the Malian Security and Defence Forces. The resolution also reinforced cooperation between the mission, the local multi-national “Group of 5” Sahel forces and French forces while respecting their respective mandates.” The escalatory nature of the UN’s move is obvious.

The tactical connection between French Foreign Legionnaires and the UN forces have only led to an inevitable comparison that has made the task even tougher for the peacekeepers on the front lines: according to Sieff’s article, Islamist extremists across the Sahel region have dubbed the whole undertaking as “Crusader occupation forces.” As a result, the militants have started targeting peacekeepers. Sieff described attacks on UN convoys with improvised explosive devices and cars driven into UN compounds carrying 1,000-pound bombs detonated in suicide attacks. The UN death toll is currently 169, and there will be more.

If Canadians think that our mission in Mali will be a return to some form of peacekeeping, they are in for a stunning shock: There is no peace to keep. The UN has already begun moving into a dangerous and violent form of operations that the UN does not formally recognize, known in military circles as “peace imposition.” The obvious demand for rapid reaction and effective logistics will put a heavy burden on the Canadian contingent. They will be in the very epicentre of the most aggressive and dangerous actions, and losses are practically a certainty. “It is a crisis that looks more like the U.S. ground wars in Iraq and Afghanistan than the cease-fires traditionally monitored by U.N. missions,” Sieff writes—and in this, he is absolutely correct.

Former ambassador Robert Fowler, in an open letter published in the Globe and Mail, wrote of what he saw as “the importance of Canada’s mission to Mali.” “The Islamists hate everything we represent,” he argued. “They also hate the United Nations with a vicious passion.” His assessment aligns quite well with the trends identified here. However, his recommendation for a major whole-of-government commitment to the region is definitely not what the Trudeau government wants—that is, another searing Afghanistan experience.

Fowler, who spent months as a captive of the rebels, feels that the Canadian mission will not be about regime change and social re-engineering. But frankly, how he views the mission will not affect how it is actually conducted. That has already been established by the rebels who have likened all outside forces to “crusaders.” The prospects are high that this will go much as the Afghanistan debacle went; the same type of escalation and mission creep seen during our 12-year engagement there is already happening in Mali. The UN is expanding its operational aims and tactical objectives in the region, finding new allies, and some old ones, for a protracted struggle.

This type of mission against radical extremists and corrupted political systems has consistently produced very dubious results in Afghanistan, Iraq, Libya and Syria. Given the long and complicated history of the Sahel region, it feels foolish to expect anything else in Mali.