Canadian MPs and their extravagant gifts. Is this bribery?

Scott Gilmore: John McCallum got $73,000 in gifts from China as an MP. Ottawa says it's 'sponsored travel'. Diplomats would call it 'being compromised'. 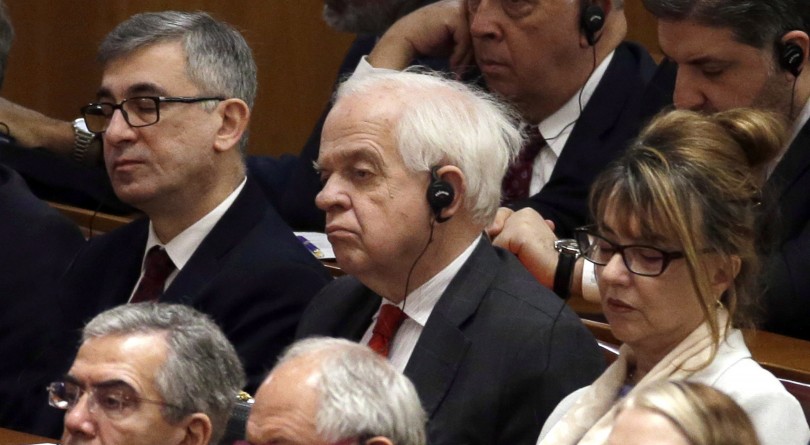 McCallum attends a conference to commemorate the 40th anniversary of China's Reform and Opening Up policy at the Great Hall of the People in Beijing, Tuesday, Dec. 18, 2018. (AP Photo/Mark Schiefelbein)

Canada is cursed by blessings. We have it so good in this country, we easily overlook the few bad things, even when they are utterly appalling.

For example, according to the U.S. News & World Report’s annual ranking, Canada is number one for the best quality of life—an accolade that all but ensures we will forget there are currently 62 long-term drinking water advisories in communities across the country. Or, we are so impressed by our multicultural successes—two(!) Governors General were women of color—we don’t notice that in Toronto black Canadians are 20 times more likely to die during interaction with the police than their white counterparts.

Likewise, we are so justifiably proud of our transparent and democratic political system we are mostly blind to the outrage that legislators in our Senate are neither elected nor accountable. The absolute worst example of this, however, is our indifference to the open bribery of our Members of Parliament.

There are legal and layman definitions of bribery. I am not an expert on the former, but all of us know that according to the latter, when you offer anyone something of value in order to persuade them to favour you in some fashion…it’s a bribe. Don’t take my word for it, that’s the OED definition.

So, based on the most recent information provided by the Conflict of Interest and Ethics Commissioner, Conservative MP Pierre Poilievre accepted $13,516 in “benefits” in 2017 (a trip to Taiwan courtesy of the Chinese International Economic Cooperation Association). The NDP’s Ruth Ellen Brosseau took $11,705 (a trip to Israel paid for by the Centre for Israel and Jewish Affairs). And across the aisle, the Liberal’s James Maloney cashed in with $14,116 in payments (also a trip to Israel from the Centre for Israel and Jewish Affairs). All told, in that year Canadian MPs soaked up more than $600,000 in gifts in the form of free travel, much of it from third parties tied to foreign governments.

Except, in Canada, we gloss over this ugly little habit by using the euphemism “sponsored travel”. It’s legal and this is how it works. The government of Taiwan wants the Conservative Party of Canada to change its foreign policy in its favour. So, it gives the MPs that it believes to be the most amenable to persuasion, a free all-expenses paid luxury holiday in Taipei. It’s pretty simple.

Of course, these honest and hard-working servants of the people turn purple with rage when we point this out. “It was a work trip!” they sputter. Or, “It is my duty as a Member of Parliament to inform myself!” And, all of this is complete and shameless bullshit. Although, truthfully, the shame is on us for continuing to tolerate it.

If we entertain their protestations of innocence (we shouldn’t), there are three simple questions to ask. First, would a Canadian civil servant, a policy analyst at Global Affairs Canada for example, be allowed to accept an all expenses paid trip to Taiwan? The answer of course is no. They would be fired if they did. Why? Because the federal government considers that a bribe, and one that would compromise the civil servant’s ability to be trusted to do their job honestly.

Second, would the government of Taiwan spend money flying a Canadian politician across the Pacific if they didn’t think they were getting something in return? Absolutely not. We may call it “sponsored travel”, but they call it an investment.

The third question: would this Member of Parliament have flown themself (and often a spouse, as in Poilievre’s case) to Taiwan if they had not been offered this free vacation? Of course not. That’s why the Taiwanese government had to pay up in the first place.

Our politicians, even the slowest among them, know they don’t need to spend a week poolside in Taiwan to do their job. (But they probably could benefit from spending some time hauling drinking water in the Mitaanjigamiing First Nation, to better understand this country.)

These bribes add up, year over year, and can reach surprising size. When countries like Taiwan, or China, or Israel find an easy mark, they are more than happy to fly them back and forth on an annual basis. When you consider what they are getting in return, it’s a smart investment. And relatively cheap. An American Senator, for example, can cost millions by comparison.

I wonder what Beijing is thinking about its investments this week. Canada’s Ambassador to China, John McCallum is in the news this week because he inexplicably weighed in on the Meng Wanzhou extradition controversy and appeared to support China’s position while doing so.

McCallum is a former Member of Parliament. According to calculations made by the Globe and Mail, during the time he was in office he accepted $73,300 in gifts (aka “sponsored travel”) from the Chinese government.

Of course, we don’t know if all those trips influenced the ambassador. But, there are two things about which we can be absolutely certain. We know that if any of the other Canadian diplomats in our embassy had accepted those trips, we would consider them compromised, and they would be fired. And, regardless of whether it is justified, we can be fairly sure that right now Beijing is very satisfied about at least one of their previous investments.