Canadian nationalism isn't the answer in this trade war with the U.S. 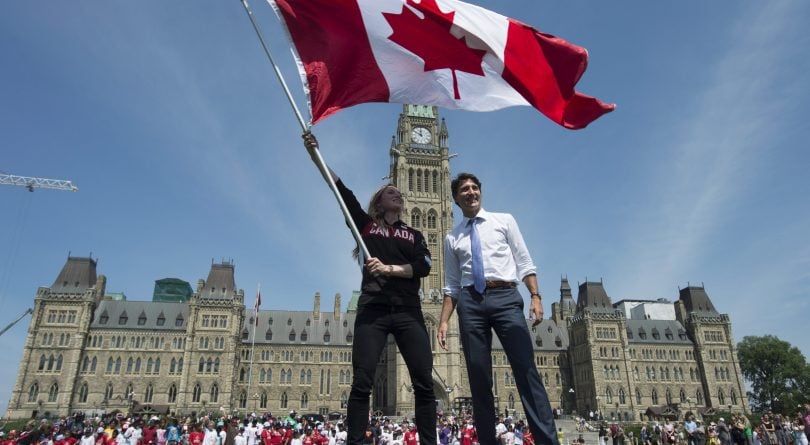 Canadian Prime Minister Justin Trudeau looks on as athlete Rosie MacLennan waves the Maple Leaf after being named as the flag bearer for the Summer Olympics on July 21, 2016 in Ottawa. (Adrian Wyld/CP)

Amid difficult NAFTA negotiations, a G7 summit gone pear-shaped, a joint communiqué abandoned by the United States, and a prime ministerial press conference that featured some uncharacteristic tough talk, it was inevitable that Donald Trump would attack Canada online, tweeting in his trademark style of a pre-schooler with some panache. His tweet-storm included this foaming mess: “Prime Minister Trudeau is being so indignant, bringing up the relationship that the U.S. and Canada had over the many years and all sorts of other things…but he doesn’t bring up the fact that they charge us up to 300% on dairy—hurting our Farmers, killing our Agriculture!” He later added, for good measure, that Trudeau’s assertion that Canada wouldn’t be “pushed around” would cost the country “a lot of money.”

Understandably, that irked some folks.

In response to Donald Trump’s recent sortie on Canadian trade practices, Canadian politicians, media members, and everyday citizens opted to run mawkish patriotism up the flagpole—a series of rigid and standing salutes to the maple leaf and the hockey rink and the virtues of expensive cheese. Suddenly, the deep chasms that separate a nation into right and left, or orange and blue and red, were bridged by nationalists who were all too keen to link arms across the void in defence of our collective honour.

A united response to a belligerent foreign aggressor isn’t necessarily a bad impulse. There is such a thing as the national interest, and there are moments in which cross-partisan and broad popular support for a measure serves the good of the nation, especially when it comes to trade. But the nature of our response was, in all-too-typical Canadian fashion, to turn inwards, to define ourselves as an absence—we’re not American, you see—and to follow the leader who promised that he’d stand up for jobs and workers and farms and all the other bits and bites that leaders are meant to stand up for. Of course, in a trade dispute it’s natural to take sides, to pick a team and filter everything through the lens of with us or against us, to imagine that suddenly it’s a matter of winning or losing.

That’s when your brain shuts off.

In the face of Trump’s critique, Trudeau relied on the same old corporatist national policy of defending the same old industries in the same old ways, while supporters of the status quo waved their hands toward the dignity of “the family farm” and the dangers of hormones as if there wasn’t another side to the argument. But of course they did. Who has time to think when our sacred cows are under attack?

There’s a particularly insidious sort of danger that follows from rallying around the flag and organizing back-bacon-fisted boycotts of American products. During these moments, path-dependent policies—already the road of least resistance, even if they’re not the best or even well-justified policy—become further entrenched, and the economic and political interests who favour them aren’t pressed on why we should be rallying against our opponent rather than taking a moment to consider whether or not that rival might have a point. In that moment, we cease being citizens and become subjects. The few who do buck the trend, as stalwart opponents of supply management regularly do (and did again this time), are eyed even more suspiciously than usual, their heresy suddenly bordering on treason.

A confident country uses the occasion of an outside critique of their policy to engage in a little introspection. Donald Trump is an untakeable ass, the worst president in the history of the United States and a fool who knows very little of what he speaks and presumably even less of what he doesn’t. But that’s no excuse for Canadians to be lazy. If the English philosopher John Stuart Mill taught us anything, it’s that sometimes there’s wisdom to be found in the unlikeliest of places. So, when we as a country meet a critical moment—in the midst of a major national summit, say, or a high-stakes trade negotiation, or a skirmish with our largest and suddenly mercurial trading partner—we should embrace it as a chance to ask ourselves some difficult questions, to see ourselves in a different way and through a different lens. A bit of self-critique is far more productive that doubling down on the deep, suspicious impulse to throw on a red pinny and rush headlong towards the 49th parallel with a fist full of Avonlea Clothbound Cheddar and dreams of honouring our British forebears by torching the White House—even if it is far less of an entertaining outing.

Indeed, today, a better approach to trade than mawkish nationalism isn’t just possible, but necessary. Canada must be able to calmly and cooly assess the best way forward in an era of global geopolitical adjustment, if not full-on realignment, asking ourselves what, if anything, we ought to protect as a critical national industry worthy of viewing through a security lens. We should be considering what our trade relationships might look like decades from now. We should even, perhaps, ask ourselves whether protecting our dairy industry is wise policy when those who need access to its products the most can afford it the least. None of this starts with retreating into a parochial conception of what Canada defined by what we’re imagined to be most fundamentally not—that is, American.