Jason Kirby: Canada vowed that bailout loans to failing automakers in 2009 would have strings attached. Surprise, surprise: they did not. 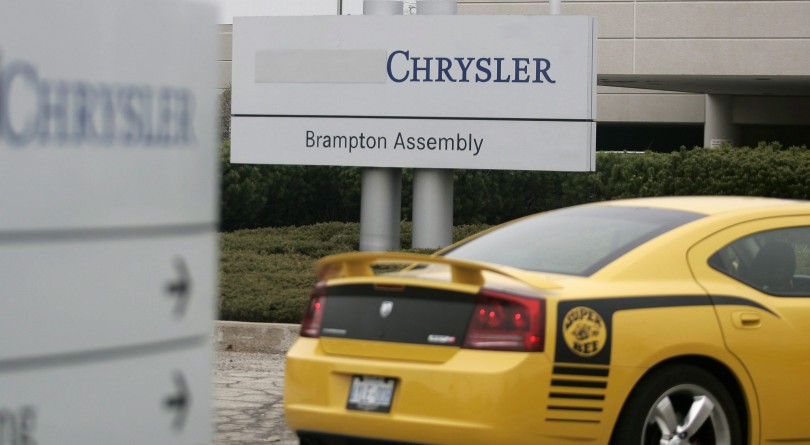 A vehicle enters the Chrysler assembly plant in Brampton, Ont., in April 2009, the year Canada and Ontario bailed out the failing automaker. (THE CANADIAN PRESS/Geoff Robins)

It would be grand if politicians marked the miserable end of so many corporate welfare giveaways as eagerly as they celebrated handing out the money in the first place.

But alas, Canadian taxpayers were left to themselves to scour through hundreds of pages of the Public Accounts of Canada 2018 report released on Friday to discover the sorry final chapter of the 2009 bailout of the auto sector.

Closing in on a decade since the Harper government doled out nearly $14 billion to Chrysler Canada and General Motors Canada, Ottawa has written off $2.6 billion owed to taxpayers by a defunct arm of Chrysler.

Not that one would even know which corporate deadbeat failed to pay. As CBC News pointed out in first reporting the details of the write-off, the Public Accounts report made no mention of the recipient of the loan. Only that the money came from Global Affairs by way of Export Development Canada’s Canada Account.

A spokesperson for Global Affairs confirmed to CBC the dud loan was to “Old Chrysler”, an accounting entity formed when Chrysler collapsed in 2009. In order for “New Chrysler” to live, “Old Chrysler” had to die, taking billions in bailout money with it.

The write-off of Chrysler’s loan, and the “nothing to see here” way it came to light, is a reminder that after the back-slapping and handshakes when a bailout deal is announced, government handouts to corporations disappear into a deep dark hole.

In those grim days of 2009 as the economy slid deeper into recession, prime minister Stephen Harper and Ontario premier Dalton McGuinty stood shoulder to shoulder in bipartisan solidarity to rescue the two automakers. (Remember always that Ford Motors did not require a bailout or declare bankruptcy in 2009, having managed itself responsibly in the first place.) Harper said the “short-term” loans were part of a “holistic” approach that would help save the industry and jobs, though he also delivered a harrumphing warning to the teetering automakers about the money they were getting, a message also meant to reassure the remaining fiscal conservatives in his party who were horrified by Harper’s transformation into Stimulus Santa: “There’ll be no blank cheques, so any assistance… will come with strings attached.”

By 2011, the Harper government was trumpeting Chrysler’s repayment of its loans—that would be the loan to “New Chrysler”—seemingly signalling to Canadian taxpayers that they’d been made whole.

Of course, that wasn’t the case. In 2014, an auditor general report found the two governments had only recovered $5.4 billion of the $13.7 billion in bailout funds. Ottawa and Ontario had also taken equity stakes in the two companies, but even after those were later sold, taxpayers were still out by billions.

Ottawa never really expected the “Old Chrysler” loan to be repaid. It just wasn’t clear when the final lumps would be delivered. Now, rubbing our bruises, we know.

We’ve seen this sad re-run too many times already. Just consider EDC’s Canada Account, through which the loan to “Old Chrysler” was funnelled. It’s a fund with the stated goal of supporting businesses and projects that are deemed in the “national interest,” so not surprisingly it’s a favourite plaything for governments of all political stripes when things get rocky. A look at the Canada Account’s transaction list since 2002 is like taking a walk down Boondoggle Road.

There’s Chrysler’s financing (listed conveniently and ambiguously at “1 billion +”, allowing for the sum to balloon) along with $1 billion plus to General Motors, which has been repaid.

Davie shipyards makes several appearances on the Canada Account list. In 2008 Ottawa funnelled $380 million to the company by way of financing and loan guarantees. Two years later Davie was in bankruptcy protections—a position where it has spent a considerable amount of time over the last three decades during which it has absorbed billions in taxpayer money. EDC ended up writing off $350 million on that most recent adventure in 2014.

The Canada Account was used to kick $100 million over to Air Canada in 2009, part of Ottawa’s $250 million bailout package for the airline—a move which angered competitors like WestJet, which had no need of rescuing. (In that case, Air Canada repaid the $100 million the following year.)

Bombardier, Canada’s perennial collector of government handouts, pops up over and over; it received $500 million of support through the Canada Account, which doesn’t even include the Trudeau government’s most recent $372.5-million loan, which arrived in Bombardier’s coffers through other channels. How much is Bombardier into Canadian taxpayers for? Who knows—that’s an industry secret—but it’s likely in the hundreds of millions of dollars.

And because the Canada Account is Ottawa’s piggy bank for “national interest” projects, it was tapped this summer when the Trudeau government announced it was buying everyone in Canada a pipeline. More than $1 billion (again, with that ambiguous plus sign) in loan guarantees were earmarked for the $4.5-billion purchase of the project, which hit a wall just months later when a federal court quashed Ottawa’s approval of the pipeline, leaving Canadians owning a pipeline they’ve paid for, but may never get built.

The final reckoning for the auto bailout took nearly a decade to unfold. What did Canada get in the end? Ottawa helped save a “Big Three” automaker that now doesn’t rank even among the top 10 biggest carmakers in the world. Yes, jobs were saved—Fiat Chrysler employs about 9,000 workers in Canada, down from 10,000 at the time of the bailout—but over that time Canada’s economy has added more than 1.7 million new jobs. That’s hardly a windfall return. It’s no surprise Ottawa was content with nobody ever noticing this write-off.