Evelyn Asiedu: The absence of demographic information on Black and racialized students renders their experiences untenable and provides no incentive for change 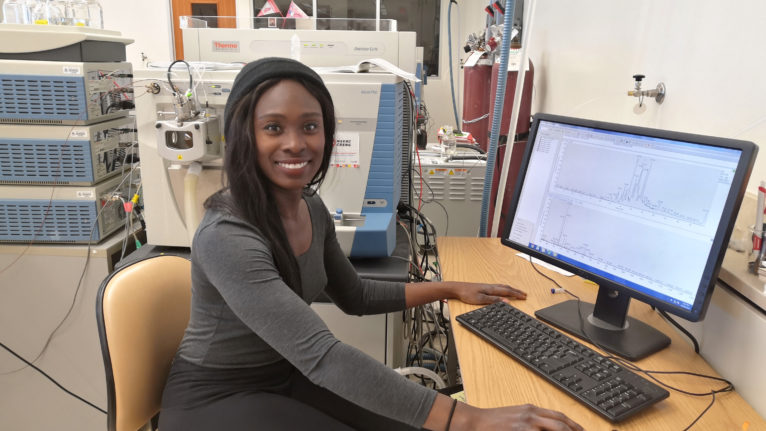 Evelyn Asiedu uses the Orbitrap mass spectrometer to view data for her research at the University of Alberta. (Courtesy of Evelyn Asiedu)

I moved to Edmonton in July 2013 after completing an Honours B.Sc. in chemistry at the Western University. I came to study the oil sands, to understand which chemicals are in tailings ponds and how long they take to naturally degrade. I’m enamoured of the methodical interrogation of our natural world, of the collective curiosity which guides us into the expanse of the unknown. I’m made for research and I’m taking steps to eventually lead my own team as an environmental scientist.

Being a Ph.D. student at the University of Alberta has been the greatest blessing of my life. It’s also been the biggest challenge. I’ve been pushed intellectually, but what’s been more difficult is knowing every day that I’m one of the only people who looks like me in my program—or in graduate school at all—at a university of thousands of people. For many at the university, I am the first Black person they’ve met. I’m greeted with fist bumps, not handshakes; “You’re so sassy!” or “Where are you actually from?” When I question someone’s bias, I’m sensitive, or I’m overreacting. I’m not allowed to be angry.

A graduate student must defend what they do in their research and how they think. As a Black woman, I have to justify why I am. My actions either reinforce or contradict an idea of who I’m supposed to be. And whether I make a clever joke or a quick rebuttal or a silly mistake, it’s not just me talking. It could be taken as representative of another Black person who may one day share academic and professional spaces. These continuous interactions wear on me. They are subtle reminders that I’m an alien in my own home. But I deserve to be here. I belong here.

Race inequality and the related economic and wealth disparity is top of mind for me. Always. To keep going, I repress these thoughts, relegate them to the far corners of my consciousness. I refocus and pour myself into my work and other productive distractions. But in the wake of the recent deaths of George Floyd, Regis Korchinski-Paquet and several other Black people at the hands of police, I am experiencing a thaw. I’m now forced to acknowledge a dull, nagging and persistent pain which has always been here inside me. I can’t ignore it: Black people have endured a brutally violent and tragic history in North America, and that history continues to this day. In the ongoing fight for basic human rights, Black people die every day because in the eyes of many, Black people aren’t really people. The subjugation of Blacks extends past the end of slavery and lives on in the resistance against our presence in traditionally white spaces, including in the academy.

For as long as I can remember, my parents told me I have to work harder than anyone else. This doesn’t just apply to my career. It means carrying a heavier emotional load than my friends and peers. It means learning to smile when I’m hurt so that others can be comfortable. It means accepting that my very existence is threatening to some and I must become more palatable if I want to advance.

When the realities of Black citizens living in the U.S. are discussed—whether through news or social media—Canadians are proud by comparison. We pacify ourselves with the rhetoric that “It’s so much worse in the States!” But Canada’s identity as a “cultural mosaic” restricts candid discussions about unfairness in our country. The reality is that, in the U.S., these discussions happen more openly within several institutions, including the post-secondary educational system.

The hashtags #blackintheivory and #ShutDownSTEM were born not just from personal stories, but actual numbers seen across all levels of scholarship. Data from the National Science Foundation (NSF) shows that in 2016, just 3.5 per cent of American doctoral recipients in STEM were Black women. This number is eclipsed by the analogous value for white females at 28.5 per cent (38.8 per cent of the population), and is lower than the proportion of Black females in the general population (6.9 per cent). Black female STEM scholars hold just 1.7 per cent of tenured positions in U.S. universities.

Corresponding values for Canada are difficult to find. While it is not uncommon to see statements touting diversity and inclusion about various levels of recruitment, race-based data is seldom collected at Canadian universities. The Natural Sciences Engineering Research Council (Canada’s NSF equivalent) does not record the race of scholarship winners or grantees. I found a report from 2018 by the Canadian Association of University Teachers stating that two per cent of university teachers are Black.

I asked the Faculty of Graduate Studies and Research and the Graduate Student Association at my university why these numbers are not collected. The FGSR explained that any initiative to collect race-based data would be “preceded by consultation and discussion with student groups, among other university stakeholders, to determine what data would be gathered and by what method/format.” The intended use of the data would also be discussed, and any use or dissemination would be governed by the Freedom of Information and Protection Act. The GSA agreed that race-based data would be useful to upholding the university’s commitments to equity, diversity and inclusion (EDI), but said that there were “social, institutional, legal and logistical elements that need to be navigated” before a process for collecting this data could begin.

The absence of this information renders the experiences of racialized people untenable and provides no incentive for change. In the foreword to a special issue of the Harvard Educational Review titled “The Double Bind,” Drs. Lindsey and Shirley Malcom, a mother and daughter who both study the inclusion of people of colour in STEM, wrote that minority women in STEM are “are at once highly visible and invisible.” I feel this through and through.

I have not felt the weight of a 200-lb. man kneeling on my neck, crushing my trachea as I beg for life. Racism of the North is often discreet and insidious. It’s not always bullets, bloodied bodies or battery by batons. Our brand is marked by muted mouths, active avoidance and intentional ignorance. It is silent, systemic suppression of success. On campus it manifests as a lack of presence and a clear imbalance in the representation of the knowledge and ideas of Black people.

At a minimum, implicit-bias training should be a yearly requirement for those who hold power in post-secondary institutions: senior administrators, deans, researchers, lecturers and teaching assistants. In order to fulfill their commitments to EDI, Canadian universities must critically evaluate the selection and retention of racialized people at various stages of the academy. But first they must thoroughly review the demographics of the student population.

I have a Ph.D. to finish which, in the midst of a pandemic, feels hilarious and futile. Faculty positions are so competitive these days and the projections for Black females in my field are abysmal. The acute awareness of anti-Black racism is draining for me; on some days, the isolation feels too much. But I’ve come too far. Quitting is not an option. I continue to push myself and honour sacrifices of the past. I am resilient now for those like me still to come.

If you’re reading this, thanks, but it is not enough. Just checking in on me (or any of your Black friends) is not enough. You must do something. Call your “liberal-fiscally conservative” parents and ask for their thoughts on privilege. Talk to your friends about unconscious bias. Zoom your colleagues and assess if policies of equity, inclusion and diversity are being effectively implemented at work.

The road to equality is slow and staggered, but it should be neither lonely nor monolithic. It will require a lot of people to use their influence to enact change within their families and communities, and within political organizations and academic institutions. The work that remains to be done is not for Black people to do on our own.

Evelyn Asiedu is a Ph.D. Candidate in the Division of Analytical and Environmental Toxicology at the University of Alberta.