Michael Valpy and Frank Graves: What we are witnessing from Canadians is seismic shift in collective behaviour, leading to a fundamental transformation of the role of the state and a re-balancing of societal power 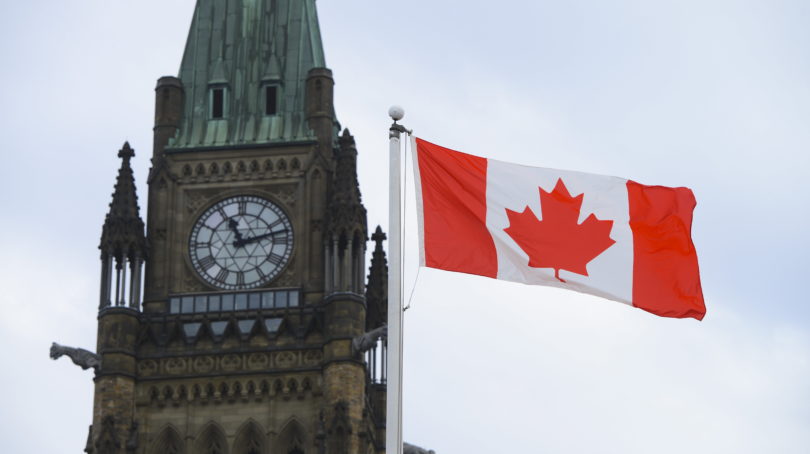 A Canadian flag flies by Parliament Hill in Ottawa on Mar. 13, 2020. (Sean Kilpatrick/CP)

Steady, Canadians, steady. The polls showing love-ins for our federal and provincial leaders need interpretation. The polls are likely not a sudden national swoon for Justin Trudeau or Doug Ford, John Horgan or François Legault, and the others.

MORE: 338Canada: Confidence in the Liberals runs high. But for how long?

What the polls are showing—surveys by EKOS Research among others—is that Canadians are scared witless. Canadians think they have a 50-50 chance of becoming infected. Sixty per cent say they are feeling serious stress, a feeling most acute among those under the age of 50. Two-thirds think Canada is in either a depression or serious recession. Sixty per cent think the country is going to be worse off six months from now. Two-thirds say they have already been financially affected. One-third say if they lose their jobs they will be out of funds within two-to-three months.

It would be difficult to over-stress the unprecedented nature of the public response, the dramatic hope and faith that government will save the country. Hence the diminution of the seemingly unbreakable hold that partisanship and regional polarization had on the country only a few weeks ago. This new collective mind may not be entirely stable and it is likely being reinforced by broad disdain for how Trump is handling matters in America.

But what Canadians are doing is telling their governments to do whatever it takes to make things right—make major expenditures for health care and declare public health emergencies, help the vulnerable, turn on the spigots for financial support for businesses and individuals, do what it takes to keep people working, look after the old, do something for children, be ruthlessly tough on price gougers and people who ignore directions on social distancing and prohibitions against public gatherings. Get things done even if it means ignoring some of the niceties of the democratic process and human rights protections.

MORE: Here are the accidental frontline workers keeping food on your table

And what we are also likely seeing is Canadians recognizing that they are in the midst of a once-in-a-lifetime episode. EKOS Research finds Canadians unified in seeing the coronavirus pandemic as “the challenge of a lifetime,” and turning their minds to what they want their governments to be doing once the pandemic has passed.

They may see a dark side, like the ordered authoritarian populist outlook vividly seen in Viktor Orban’s power grab in Hungary, or the fuelling of xenophobia reflected in depictions of the pandemic as a “Chinese” virus. But mainly what we are witnessing in the country has all the appearances of a seismic shift in collective behaviour and attitudes, and maybe a new sense of direction and innovation—the acceptance, even the welcome acceptance, that Canada and the rest of the world could be enveloped in a great disruption, leading to a fundamental transformation of the role of the state and a re-balancing of the forces of societal power.

It’s what happened at the end of the Depression and at the end of the Second World War as western governments embraced policies to reduce inequality, to bring relief for the unemployed and poor, to use the power of the state to build the welfare state while reforming the financial system and help the economy recover.

Humanity has entered the age of catastrophes, the Nigerian novelist and poet Ben Okri wrote recently in The Guardian: “The real tragedy would be if we come through this pandemic without changing for the better. It would be as if all those deaths, all that suffering, all the deaths to come, all the suffering to come, would mean nothing.”

The questions raised by how Canadians and their governments behaved during the pandemic should spill over into other issues threatened by future disasters—the climate crisis, the assaults on bio-diversity, the cruel diminution of dignity in the workplace, and the growing economics of despair for working-class Canadians being trashed by technology and the offshoring of jobs to enhance profits, the definition of essential workers and their value to our social well-being (the federal government has defined essential workers as “critical to preserving life, health and basic societal functioning,” which, as we’re seeing, very much includes supermarket cashiers, building cleaners, caregivers and gig-economy delivery people). Canadians should come out of the pandemic ready to examine the unequal availability of housing, on-the-cheap treatment of the institutionalized elderly, how extensive the impact of artificial intelligence will be, and changes to methods of delivering education to the young that we’ve witnessed.

They should come out of it with their minds open to governments investing in sensitive and essential parts of the economy and society, removing elements from the marketplace in order to ensure communal well-being. They should have on their minds, as Inger Andersen, the executive director of the United Nations Environment program pointed out earlier this week, that almost all pandemics are come from animals, meaning the more we violate the planetary ecosystem, the more we can expect such pandemics. So the environment (and climate change) are part of the disruption.

“The panic, driven by fear, ought to be replaced with a passion for a better life for the planet and its people,” Orki wrote. “We will not acquire the calm we need to deal with this pandemic through a fear of death. What we need is a respect for death and a new hunger for life.”