Cheer up, Tories. And don't do that stupid thing you're thinking of doing

Jen Gerson: Let Justin Trudeau and the Liberals eat every morsel of cake coming to them, because time and circumstances are finally on your side. 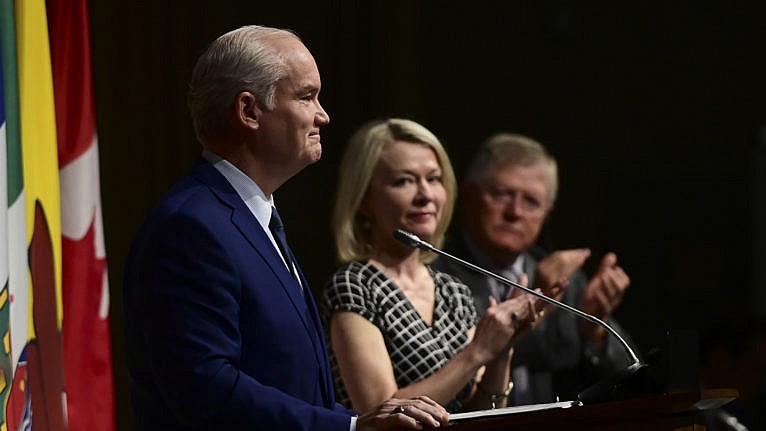 Members of the Conservative caucus applaud Erin O'Toole following his address to them on Wednesday. (Sean Kilpatrick/CP)

It’s come to my understanding that there is some considerable consternation about the future of Erin O’Toole, leader of the Conservative Party of Canada, on the grounds that he underperformed in this week’s election.

I cannot help but wonder whether those now implacably resolved to booting the man for being inadequately conservative might, perhaps, consider getting a goddamn grip.

This state of affairs may ensure O’Toole’s leadership is unsalvageable.

However, there is a flip side to this argument—the get-a-goddamn-grip side—worth considering before you all roll the dice on another rookie leader 18 to 24 months ahead of your next election campaign.

First, let’s talk about expectations. The Liberals called an early election on the back of promising polling numbers in the hopes of securing a majority government. They failed. Six weeks ago, if you told the Tory braintrust that the election would result in an outcome almost hilariously identical to the one it left behind, most would have been delighted.

Conservatives have a bad habit. They go into an election with reasonable expectations, enjoy some early momentum, and then let the excitement get to their heads. They reset those early expectations to something far less probable, and when the campaign produces exactly the results they predicted at the outset they declare the whole affair a disappointing failure.

I will note here that this complements the Liberal temperament, which interprets entirely lacklustre results as nothing short of a sign from the trumpet-wielding messengers of God blessing their mandate. Only the Liberals would see two successive minority governments with declining popular vote totals as clear-cut evidence that they, the worthy elect, have been chosen without reservation to lead the nation to paradise.

The Conservatives could use a little more of that energy.

The outcome of 2021 and 2019 are essentially the same, but the terrain in which these wars were fought was not.

READ: That time when Erin O’Toole almost looked like the next prime minister

Andrew Scheer lost a winnable election. Erin O’Toole held the line on much more difficult ground. Remember, the Liberals have spent the pandemic shovelling thousands of dollars directly into the pockets of Canadians. They enjoyed a rally-around-the-flag effect as a result of the crisis. And they did secure an adequate vaccine supply.

Further, the Liberals enjoyed significant distance from the scandals of 2019.

Meanwhile, Erin O’Toole, elected to leadership only a year ago, has had few opportunities to appear in public thanks to COVID, and less chance to build a national profile. He has enjoyed less practice on the hustings and in front of media, and he’s lacked the political capital to consolidate his hold on his caucus.

This does not excuse the Tories for running an imperfect campaign. Their obsequious behaviour toward Quebec, especially on items like Bill 21, failed to yield much. The party was caught out, inexcusably, on the gun file—a wedge issue so utterly predictable that failure to anticipate it is nothing short of political negligence.

O’Toole should have mandated vaccines for his candidates, not only as a matter of smart politics, but also as a simple question of public health and safety. If one accidentally brought COVID into a long term care facility, his party would be forever cast as a collection of granny-murderers. Why take that gamble?

There are strategies to be re-examined, policies to be tweaked. Most importantly, O’Toole needs what every new leader needs—time to get better.

Still, there is nothing terminal in O’Toole or his performance. Improvements can be made here without casting the entire party into a civil war because some feel O’Toole fails to meet a conservative purity test. (The progressive left has a lot of lessons in store if you want to see how those end.)

Conservatives ought to have seen this election as the first in a two-election strategy. Fundamentally, the urbanites who hold the key to government don’t trust you, Conservatives. They’re worried about the conspiratorial lunatics in your caucus and your base, and they’re worried about who actually holds the reins of power in your party. Their distrust is fair, and will take time to repair.

If you dump your affable, moderate, centrist leader at the first opportunity because he didn’t crack the 905 on his first try, and you replace him with someone who will chase Maxime Bernier’s vanishing social movement like a labradoodle running after the wheels of a mail truck, you will wind up confirming every extant fear and stereotype this crowd already holds about you and your party.

It’s a trap. Be smarter than that.

Meanwhile, I have some good news for you.

Justin Trudeau isn’t going to get more popular in the long run. Cease fretting over your own numbers for a minute and look at his. The worm began to turn with the SNC-Lavalin scandal back in 2019, and with the exception of some short-term bumps in popularity around the pandemic, the trendline is clear. His big red balloon hasn’t popped, but it’s been leaking air for years.

The Liberals squandered extraordinary amounts of money, political capital, and general goodwill to secure another minority government that won’t last terribly long. If you’re a smart Tory, you’ll be thinking one thing: “Good.”

The Liberals are temperamentally incapable of recognizing a de facto loss. They won’t show humility, nor course-correct in any way.

They won’t control committees in the next parliament, so watch this space for more information about what the hell was going on with the two scientists fired from the National Microbiology Lab with clear connections to China. There is information that the Liberals literally sued the Speaker of the House to prevent becoming public—a suit that was dropped when the writ was drawn up. A majority government would have insulated the Liberals from whatever is there; a minority will not.

Pandemic supports are slated to come to an end next month, after which it’s the Liberals who will have to deal with the economic fall out, and the consequences of historic government spending.

And where did all that spending go? After the WE scandal, how confident are you that there isn’t another Liberal-connected charity, business, or lobby group that didn’t get some special consideration? How sanguine are you about the impact of inflation, or housing prices in the coming two years? How sure are you that our allies will start taking Canada seriously as partners on an increasingly volatile world stage?

In other words, what evidence is there that external events over the next 18 to 24 months will conspire to reverse the trends now closing in on a philosophically spent party led by an increasingly unpopular leader?

Time is on the CPC’s side. The Conservatives don’t need a perfect leader. They need a credible one, and that credibility can only be created through patience. O’Toole needs to demonstrate a track record as a leader of a viable, mainstream party. Give him the space to do it.