China was in violation of International Health Regulations. What do we do now?

As we look towards a post-coronavirus world, we must seek accountability for the human toll and economic devastation that this virus has wrought

By Errol Patrick Mendes, Marcus Kolga and Sarah Teich May 3, 2020 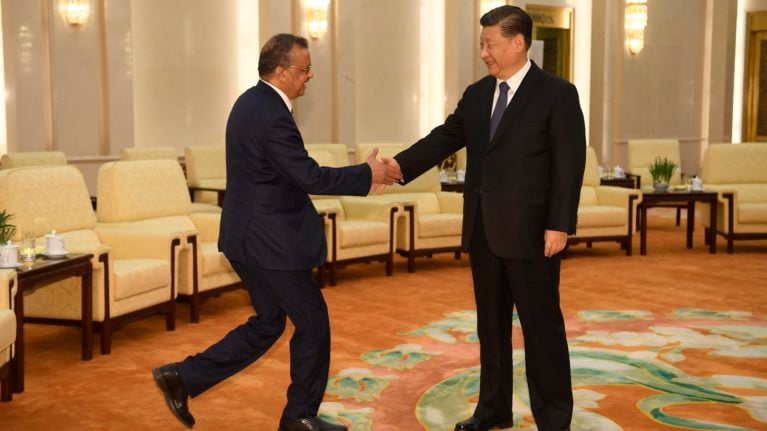 Tedros Adhanom (L), Director General of the World Health Organization, shakes hands with Chinese President Xi Jinping (R) prior to their meeting at the Great Hall of the People in Beijing on Jan. 28, 2020. (CP/EPA/Naohiko Hatta)

Errol Patrick Mendes is a professor of constitutional and international law at the University of Ottawa and a  recipient of the Order of Ontario. Marcus Kolga is an international human rights activist expert on foreign disinformation and influence operations and a Senior Fellow at the Macdonald-Laurier Institute. Sarah Teich is a Canadian lawyer focused on human rights and security issues, and an expert on counter-terrorism.

Given that China’s negligence enabled the spread of COVID-19, there are growing international calls to hold them to account, and Canada, which has a number of options available to it, needs to join the chorus.

The Chinese government was responsible for collecting data about its spread and promptly informing the World Health Organization (WHO), governments and scientists around the world. Instead, China suppressed, falsified and obfuscated data and repressed advanced warnings about the contagion as early as December, well before the start of the global pandemic. The Chinese government also joined Moscow in exploiting confusion around the pandemic by engaging in information warfare through blatant disinformation on the origins of the virus, suggesting it was developed as a tool for U.S. biological warfare.

In recent weeks, Beijing’s focus has shifted towards promoting “humanitarian engagement.” Chinese ‘‘aid’’ have included COVID-19 test kits and personal protective equipment (PPE), turning out to be faulty in many cases. Several European countries have even banned their import. Last week, the Canadian government announced that one million face masks recently purchased from China failed to meet standards and would be returned.

Critics of Chinese government policy, including Canadians, are regularly and irrationally labelled as being anti-Chinese, racist or worse. The Macdonald-Laurier Institute (MLI) recently co-sponsored an international open letter calling on western governments to conduct a “critical evaluation of the impact of Chinese Communist Party policies on the lives of Chinese citizens and citizens around the world,” and the letter was quickly condemned by the Chinese embassy in Ottawa.

Among the tools available to Canada and its allies is Magnitsky human rights legislation, which if fully implemented and utilized, would allow governments to target and sanction foreign officials who have engaged in corruption and human rights abuse, with asset freezes and visa bans.

The Canadian government, while targeting officials in some of the world’s most repressive regimes, have avoided sanctioning Chinese officials. Chinese government officials responsible for the detention of up to two million ethnic Uyghurs in forced labour camps should be placed on Canada’s Magnitsky list, as well as those responsible for the violent crackdown on Hong Kong pro-democracy activists.

However, officials in Wuhan and Beijing, who delayed warnings about the virus and detained whistleblowers trying to warn about it, should also be immediately placed on Canada’s Magnitsky List. A recent report by the U.K.’s Henry Jackson Society (HJS) suggests that the total potential damages liable against China among G7 countries will exceed $4 trillion, with over $80 billion owed to Canada alone to compensate for immediate spending required to deal with the crisis. If one includes more recent stimulus measures, Canada’s share could balloon beyond $146 billion and will only grow. Estimates of the future federal deficit from fighting COVID-19 range up to $400 billion.

According to MLI senior fellow Phillip Cross, the total cost to Canada “should also include the damage done to Canada’s long-term potential growth, both from lower labour supply, less investment and firms going bankrupt.”

While the Chinese government cannot be tried in domestic courts, according to the Foreign Sovereign Immunities Act in the U.S. and the State Immunity Act in Canada, other avenues are available to bring the regime to justice.

Under an IHR dispute settlement mechanism, WHO members can assert legal claims against China on the basis that it has incurred state responsibility under customary international law for damages caused by the breach of its WHO obligations. So far, no state has expressed interest in doing this. This may not be surprising; a central obstacle to succeed in an international tribunal in a claim for “wrongful action” damages is proving causation. One challenge is that the WHO had heaped praise (wrongly in our view) on China’s handling of the virus outbreak. It would be unlikely to assist in any action against China. Moreover, the failures of many countries to effectively contain and mitigate the damage from the spread of the virus would only make it more difficult to prove causation.

While it is unlikely that China would ever agree to appear before any international tribunal or the International Court of Justice to defend its action, there are other ways of holding the Chinese state to account for the massive human and financial costs of the pandemic.

Even before COVID-19 is brought under control, the United Nations must establish an international commission of investigation comprised of the highest level of international health, medical and international law experts to assess the extent of the damage to the entire world and examine the China’s actions, including a quantitative amount for damages.

Once that commission’s report is completed, the UN Security Council (UNSC), under its peace and security global mandate, must pass a resolution that demands all WHO members provide immediate access to data on any outbreak that could trigger a global pandemic.

If China uses its UNSC veto, given the widespread damage to populations and the economies of some of the most vulnerable countries in Africa, Latin America and Asia, individual countries and their regional organizations must demand that all debts owned by these countries to China be forgiven.

With regards to the human and economic toll that the developing world is facing, governments should consider the use of their capital, infrastructure and commercial sectors in their relations with China, in order to recoup at least some of the trillions of dollars lost due to the Chinese government’s wrongful actions. An easy response for Canada would be refusal to have Huawei have access to the 5G networks in the country for a start.

Canada should also offer its immediate support for a recent proposal by Australian Prime Minister Scott Morrison for an international investigation of the WHO’s response to the pandemic, which has been predictably criticized by the Chinese regime as “political manipulation.”

As we look towards a post-coronavirus world, we must seek accountability for the human toll and economic devastation that this virus has wrought, and ensure that those responsible are not allowed to repeat the mistakes that have so far cost hundreds of thousands of lives and trillions of dollars, irreversibly changing the world we live in.

Canada’s political leaders must find the courage not to allow themselves to be intimidated by China’s totalitarian regime, and stand up against their crimes against the Uyghurs, other human rights abuses including the arbitrary detention of Canadians Michael Spavor and Michael Kovrig, and rampant corruption. However, now is also the critical time to put in place plans to eventually hold them to account for the global spread of COVID-19.