Yaqiu Wang: As more and more Canadians are being plunged into the black hole of China’s criminal justice system, Canada's 'meddling' is past due 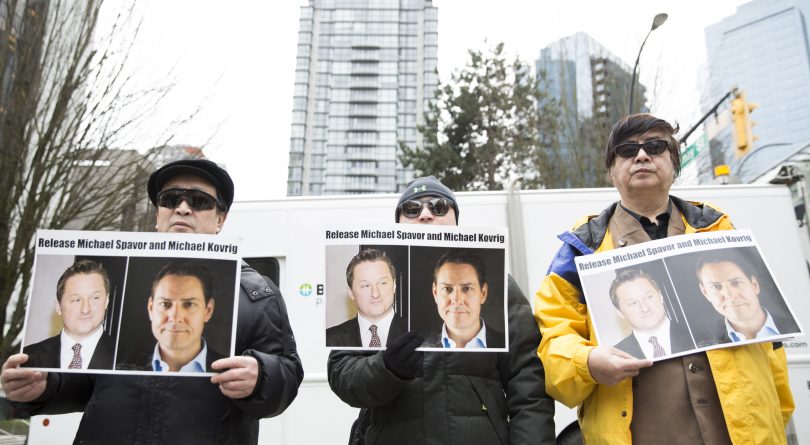 Protesters hold photos of Canadians Michael Spavor and Michael Kovrig, who are being detained by China, outside British Columbia Supreme Court, in Vancouver, on Mar. 6, 2019. (JASON REDMOND/AFP/Getty Images)

Yaqiu Wang is a researcher specializing in China at Human Rights Watch.

It is ironic, albeit unsurprising, that the Chinese government demanded that Canada “stop meddling in China’s internal affairs” when Canada’s leaders voiced support for the right of Hong Kong citizens to peacefully protest. After all, China sits on the United Nations Human Rights Council, a body whose mission is to promote human rights and address violations by all UN member states.

Canada has also criticized egregious human rights violations on the mainland. One million Turkic Muslims are being arbitrarily detained in political education camps. An unknown number of human rights activists, lawyers and writers across the country are languishing in prison for their peaceful criticism of the Chinese government. China’s internet censorship regime is being increasingly tightened to suppress dissent.

This criticism isn’t meddling. Human rights, including the rights to peaceful assembly and free expression, are universal and inalienable. The Universal Declaration of Human Rights reminds UN member countries that they have pledged to promote universal respect for human rights and fundamental freedoms. Thus, it is crucial for governments to speak out when human rights are violated, regardless of where the violations take place.

But Canada is no longer just defending the rights of people in China; the challenges are closer to home. Canadians have been increasingly plunged into the black hole of China’s criminal justice system.

In late 2018, Chinese authorities detained two Canadians, Michael Kovrig and Michael Spavor, in what is widely viewed as an act of retaliation against Canada for the arrest of Meng Wanzhou, an executive at the Chinese tech giant Huawei. Some 200 days later, the two men have still not been allowed to see a lawyer or their families. In January, a Canadian national, Robert Schellenberg, was sentenced to death following a rapid retrial filled with irregularities, another apparent response to Meng’s case.

But long before these incidents, Canadians have suffered from China’s complete disregard of the rule of law.

Since 2006, a Uyghur-Canadian Muslim cleric, Huseyin Celil, convicted on vague terrorism charges, has been languishing in a Chinese prison without consular access. Chinese-Canadian businesswoman and Falun Gong practitioner Sun Qian was arrested in 2017 for allegedly “using cult to disrupt the implementation of law,” a crime frequently levelled against followers of the religious group, which is banned in China. That year, mainland police seized Chinese-born Canadian billionaire Xiao Jianhua from his Hong Kong hotel apartment, a serious breach of the Hong Kong handover agreement. Xiao is awaiting trial on charges of bribery and stock price manipulation.

There are around 300,000 Canadian citizens living in Hong Kong, many of whom are active in the pro-democracy protests. If there’s a crackdown on the demonstrators, Canadians could be among those prosecuted by the increasingly politicized Hong Kong justice system, which convicted leaders of the peaceful Umbrella Movement.

MORE: What China hopes to get by detaining Canadians

Even on Canadian soil, many immigrants from China, including Canadian citizens, feel they cannot exercise their constitutional rights to free expression and assembly, fearing that doing so would provoke Beijing’s wrath.

Uyghurs in Canada fear that speaking openly about the severe repression in Xinjiang would send their relatives in China straight to detention facilities. Chinese in Canada worry that if they criticize the Chinese government, their job prospects, business opportunities, and chances of going back to China would be affected, or that their family members back home would be harassed.

Some Chinese in Canada have told me that even in relatively private spaces, such as classrooms and meeting rooms, they are afraid of expressing themselves. The threat is real, as the Chinese government has a long history of monitoring and conducting surveillance on students and immigrants from China around the world.

At the UN, it has worked consistently to silence criticism of its human rights record and has taken actions to weaken central UN human rights mechanisms. The country has also exported surveillance and censorship technologies and know-hows to other authoritarian governments, helping them enhance their ability to control people. In countries where China has invested heavily through its Belt and Road Initiative (BRI), local governments—under pressure from Beijing—have arrested critics of the Chinese government and cracked down on peaceful protests against environmentally-harmful BRI projects.

Instead of feeling attacked by Beijing’s angry allegations, Canadians should feel pride in upholding universal values. They should urge their government to stand firm in supporting peaceful protesters in Hong Kong, to speak out for fundamental freedoms for everyone in China, and to oppose Chinese government repression from spreading all the way to Canada.