Andrew MacDougall: With Boris Johnson now holding the tiger firmly by the tail, there's no one left to blame should the country take a mauling in the next stage of Brexit negotiations 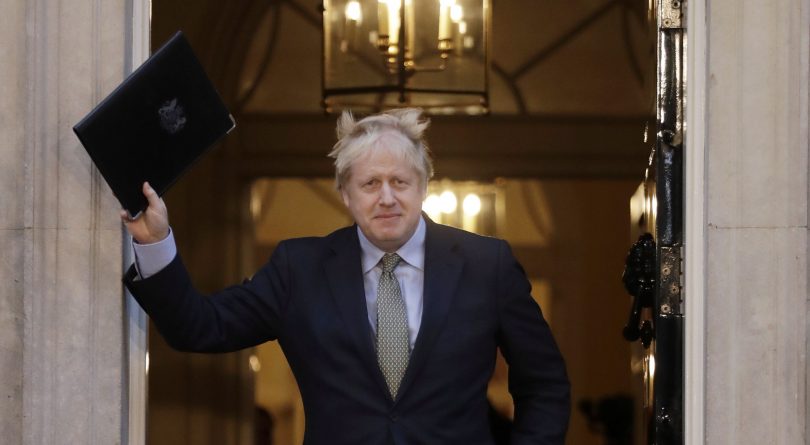 That’s one way to read last night’s stonking victory for Boris Johnson and his Conservative Party, who cruised to a larger-than-expected 80-seat majority win over Jeremy Corbyn’s band of radical socialists and anti-Semites. Johnson raided Labour’s northern heartlands and painted parts of the country blue for the very first time, including seats that would still piss on Maggie Thatcher’s grave should they be given the chance. It was a historic achievement. Parliament’s Brexit blockade is now well and truly broken and the Prime Minister will soon be able to serve up his ‘oven-ready’ Brexit deal.

‘Pyrrhic’ is, however, another way to read the result, with Johnson now holding the tiger firmly by the tail, when there’s no one left to blame should the country take a mauling in the next stage of Brexit negotiations. Put plainly, Johnson is now on the hook for the future of the country. And that future is murky.

There is the integrity of the British union which, after an equally stonking night for Nicola Sturgeon and her Scottish Nationalist Party, is now on shakier ground. Johnson might say he won’t grant another referendum, but with the Conservative government now more English nationalist than unionist, it will be tough sledding to take regional tensions off the boil. And that’s without considering Northern Ireland, who will now be treated differently to the rest of the United Kingdom as per Johnson’s E.U. withdrawal agreement.

MORE: Boris Johnson and the peculiar British art of believing in nothing

Securing a strong deal with Europe would be one way to ease tensions, but with 11 short months left in which to shape a future deal following Britain’s exit from the E.U. in January 2020, chances are any deal will be slim and perfunctory instead of deep and comprehensive. No one has as yet produced a good plan to protect Britain’s services industries, i.e. the vast majority of modern Britain’s economic offer. The good news is that Johnson has enough MPs to see off the hardcore Brexiteers in his party during negotiations, but any delay to the Prime Minister’s oft-repeated December 2020 deadline for a new deal risks putting his new voter coalition at risk. Johnson promised them that Brexit would be done. No ifs, ands or buts.

Johnson’s early morning acceptance speech acknowledged the frailty of his governing coalition: “I have a message for everyone who voted for Brexit,” Johnson said. “You may have only lent us your vote, you may not be a natural Tory, and your hand may have quivered over the ballot paper, you may intend to return to Labour, I am humbled that you have put your trust in us. And I do not and will never take it for granted.”

The Prime Minister and his advisors must now determine whether last night’s electoral realignment is permanent, or a one-time deal to get Brexit over the line. Will they be punished if Johnson’s switches from hard man of Brexit back to the socially-liberal, pro-immigration politician he was as Mayor of London from 2008 to 2016? Will voters lose faith if Johnson turns Britain into Singapore-on-the-Thames in his negotiations instead of the more left-leaning, free-spending, anti-austerity government he promised? One thing Johnson will get to work on immediately is painting the north with new infrastructure, beginning with the long-suffering (and expensive) HS2 rail project and new high-speed rail connection between Manchester and Leeds.

MORE: Canada’s Brexit talks with the U.K.: There are none

As tricky as the choices facing Johnson might be, they are even trickier for his vanquished opponents. Liberal Democrat leader Jo Swinson and Labour’s Corbyn have announced their impending departures. Nigel Farage’s Brexit Party elected no MPs. And even with Greta-mania sweeping the globe, the Green Party managed only one seat. There is no easy path back to relevance.

The Corbynite project might lie in ruin after last night’s decisive defeat; Corbyn performed worse than Michael Foot, whose 1983 Labour manifesto was called the ‘longest suicide note in history,’ but its grip on the Labour Party machinery remains strong. Will the Labour membership choose Corbyn 2.0 in the form of an Angela Rayner or Rebecca Long-Bailey? Or will the out-of-favour Blairite wing be able to advance a candidate capable of winning over the left-leaning activists who currently run the party? Whatever the case, the next Labour leader is facing an existential crisis, and must decide whether Labour will try to recapture its former identity as the party of the working class, or pursue its future as a party of the urban elite.

And what of the Liberal Democrats, who were at one point expecting to take 60 to 80 seats (they ended up winning 11). Promising the extreme position of ‘revoke’ on Brexit was a mistake, yes, but so was planning an entire election strategy around a leader with little public profile and virtually no personality. Did they not watch Theresa May in 2017? The simple fact is the more the voters saw of Jo Swinson, the less they liked her. It will be a tough grave from which to climb out of given global currents and Britain’s first-past-the-post system.

For now, the interest remains with Johnson. The last three-and-a-half years of political psychodrama have now culminated in Johnson’s ultimate ambition: to be Prime Minister with a firm grip on Parliament. It is now Boris Johnson’s Britain. With so much energy spent achieving his ambition, the country now needs Johnson to do something with his achievement, instead of losing interest in the project at this critical juncture.