Dennis Matthews: The most successful brands insert themselves into culture without turning away existing audiences 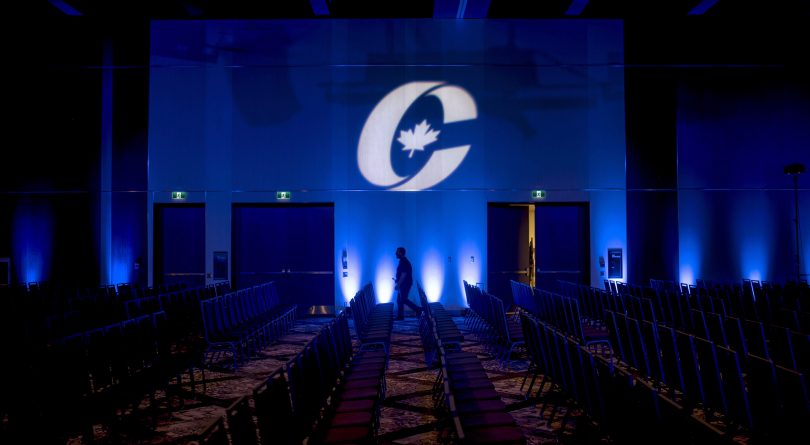 A man is silhouetted walking past a Conservative Party logo before the opening of the Party's national convention in Halifax on Aug. 23, 2018. (CP/Darren Calabrese)

Dennis Matthews is a conservative strategist and commentator who is a vice president at the national communications firm Enterprise Canada. He served as an advertising and marketing advisor to former Prime Minister Stephen Harper.

“Wow, that’s a Buick?” says the young, millennial woman in the ad. For years, the brand, generally thought of as a car for your grandparents, struggled to pass the generational torch. To curb sagging sales, General Motors (its manufacturer) needed to pivot.

The truth is, you never want to find yourself in Buick’s position: forced into running a clever, but apologetic advertising campaign as a last gasp at reinvigoration. It might have been the only way out, as European and Asian imports, more in tune with market shifts, swamped the Buick brand.

And this is exactly what’s happening to Conservatives as the party’s brand has become disconnected with parts of the country that are growing and changing the fastest: suburban and urban Canada. The Tories might be a top seller in farm country, but in the 65 most densely populated ridings people bought any colour car they liked except blue (to paraphrase Henry Ford).

MORE: What room can Andrew Scheer win, if not this one?

So, what is a brand anyway? It’s not to be confused with a logo. Brands exist in the mind of your audience. It’s the perception of everything the party stands for, says, does and looks like. From a leader’s message at a press conference to policy proposals to memes posted on social media—a brand is everything that is communicated by its audience, and also what’s not.

Jeff Bezos, CEO of Amazon, once said, “your brand is what other people say about you when you’re not in the room.” Sadly, Conservatives have spent so much time talking to people in the room (the third of the country that reliably votes for them), they’ve forgotten there are others outside. And that crowd is growing every single day.

Take Gen Z, for example. A young woman in university today may not look like an obvious Conservative Party voter, but she will be a suburban working mom of tomorrow. If she doesn’t see herself in the party today, it’s a good bet she won’t tomorrow, despite the tax cut dangling in front of her come election time.

Policies are the product, but just ask Buick—no matter how good any car is, nobody’s asking for a test drive if they can’t get past the brand. For this reason, the Conservative Party has been mired in the mid-30s in the polls for years. That ceiling will only be broken by attracting more urban voters—especially women—and regaining connections with immigrant communities who have grown—often justifiably given events abroad—wary of conservative politicians.

Political parties don’t often think about their brands the way corporate marketing teams do, but maybe they should. Because if Conservative conventions were shareholder updates, the chief marketing officer would take the stage to show how the customer base is shifting and how to keep up.

It’s been done many times before: Dove expanded its offering to match new purchasing patterns by including a product line specifically for men; historically male brands like the NFL, Adidas and Harley Davidson, have invested millions in reaching female consumers; and the best brands find a way to tap into culture to stay relevant. Think of a Nike ad: it’s not about the quality of foam in their shoes. Rather, it’s about cultural greatness. You know who else Nike has spoken to through its advertising? Female athletes. It bought a pricey spot during the Oscars this year to debut an ad about women breaking barriers.

When was the last time anyone associated the Conservatives with breaking barriers? It’s not that they haven’t: the first woman cabinet minister and the first black MP were Tories; Conservatives gave women the vote and brought in the first Bill of Rights. Conservatives are not perceived to be innovative anymore, and as a result, the party is increasingly removed in parts of the country that are growing fastest.

The solution comes from how Conservatives talk. Think again about those ubiquitous auto ads; most don’t mention horsepower, turning radius or lease rates. Leave those details to the dealerships because car brands know that purchasing a vehicle is primarily aspirational. Yet all too often, the Conservative Party has been focused on boutique tax cuts instead of presenting vision, values and purpose. It’s values and purpose that transcend the country. In our interconnected world, the days of targeting—and excluding—groups of voters has come and gone. It’s all about big-picture perceptions.

There’s no doubt the Conservative Party is an established brand, but it has become frozen in the first decade of the 2000s; a brand perceived to be exactly where it was on almost every major issue in the years before Stephen Harper became prime minister. There are very few products that were used in 2003 that look or feel the way they do today.

The most successful brands insert themselves into culture without turning away existing audiences. After all, does anybody stop banking with TD because they’ve sponsored Pride, or refrain from buying a Tim Hortons doughnut because they ran a marketing campaign featuring rainbow-coloured Timbits? The banks don’t celebrate Pride because they think there’s money to be made, they do it because cultural touchpoints make them relevant.

In 2020, the moment is right for Conservatives to think bigger: to do some things that are unexpected, which feel grounded in the present day; to renew the brand in a way that feels welcoming to a broader audience. And it’s possible to do this while holding on to deeply held conservative principles, like fiscal responsibility. A successful a brand must be perceived as contemporary and aligned with the zeitgeist of the times. Are Conservatives contemporary in urban and suburban Canada? Not today.

It’s time to for Conservatives to live up to their shareholder expectations—to think like marketing execs—because repelling votes in big cities is a recipe for permanent opposition, and becoming a Buick.