Conservatives use Pride parades to redefine the Absolute Bare Minimum

Tabatha Southey: Tory leaders have a habit of avoiding Pride parades. As some leadership hopefuls declare their intention to march, do they really think that's enough? 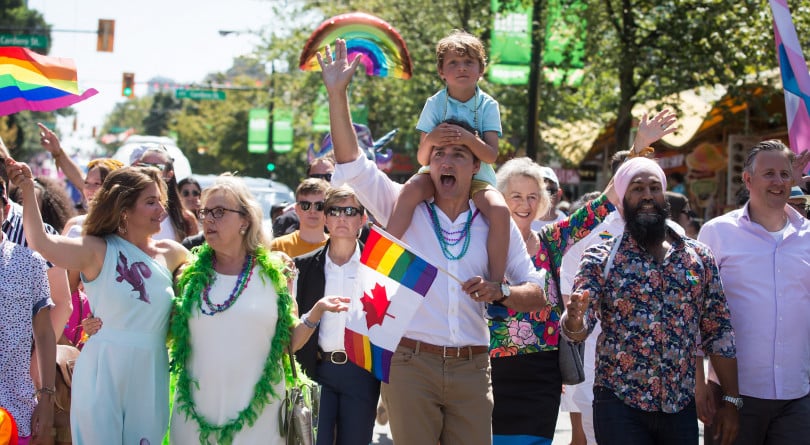 It’s becoming increasingly clear that the Conservative Party of Canada has one takeaway from the last election and that is that if the party ever hopes to form government, the new leader must tell everyone who will listen that he or she will go to Pride parades. Many of the candidates vying to lead the party have been telling any media who ask—and the media do keep asking—that hell, yes, they will go to Pride parades.

Just try and stop some of these aspiring Conservative leaders from going to Pride parades. Why, Pride parades flow through their very veins, and how is this pronounced passion for Pride parades not proof that they are nothing at all like Andrew Scheer?

Scheer being the current party leader—he resigned back in the mists of last December—who did not go to Pride Parades. Perish the thought. Scheer being the Conservative leader who said that “homosexual unions are by nature contradictory” to the “survival” of “society” and who used some metaphor about about dogs and tails that he seemed to find very amusing to try and drive this point home. Scheer being the leader who voted against a bill that extended federal human rights protections to transgender Canadians, the leader that many Conservatives, including some of these “Pick me! See you at Pride!” candidates heartily supported just a few short months ago.

READ MORE: Ten things that would guarantee the new CPC leader is a winner

The question all political parties must ask themselves after a loss is, “And what have we learned?” Apparently, for Canada’s Conservatives the answer is that they need to get some of the Pride parade panacea. Just a few half-mile marches, a couple of hours at a street fair, and they will be unstoppable, seems to be the conclusion they’ve reached. Because, after an election cycle of being dogged (and he is the one who brought dogs into it) by questions about Scheer’s refusal to do the absolute bare minimum to show support for LGBTQ Canadians, what better response is there than to do the absolutest, barest, bare minimum that Canadians have ever seen?

Brace yourselves, everybody, you haven’t seen a minimum this barely minimal before. This minimum couldn’t be bare-er if Conservative leadership hopefuls had used party funds to buy it a coupon for 10 sessions of free waxing. This minimum is so bare it couldn’t get service at a roadside diner in a nudist colony, and the Conservatives seem confident that this bare minimum will bring them straight to power, or at least straight to slightly less awkward TV interviews.

There was a spectacular eruption of homophobia and some utter nonsense spoken about trans people from two of the more hopeless Conservative leadership hopefuls. The homophobia was quickly, full-throatedly condemned by some in the party (the trans remarks, you could have heard a pin drop) but actual hopefuls Marilyn Gladu and Peter MacKay have now both said that they will march in the Toronto Pride parade, which will take place on June 28, one day after the party votes to elect its new leader.

Very few questions are being asked about all of the other pressing, non-parade issues that concern many LGBTQ Canadians. While throughout the election, concerns about Scheer’s remarks and record on these matters were rountinely greeted with assurances that everything was fine because no one would touch gay marriage at this point, LGBTQ rights are not a fait accompli. The struggle for equality did not begin and end with same-sex marriage, as many seem content to believe.

O’Toole is just champing at the bit to show up and do his bare-minimal part to support LGBTQ Canadians, and all he asks is that they meet him 99.9999 per cent of the way by just kind of getting over a history of racist and homophobic policing and also being told they were imagining a serial killer.

This is a little bit like saying you’ll join the Women’s March if they’d just smile more and stop having abortions. It is entirely like saying nothing will ever come between your bare minimal support of LGBTQ Canadians, except being asked to listen to LGBTQ Canadians.

What does the party think they’ll get for literally just showing up, on a Saturday  afternoon, for what is a really good and important time, or sending their regrets? What’s the prize for putting a sliver daylight between themselves and Andrew “They’re My Personal Beliefs and No You Can’t Meet Them, They Go To Another School” Scheer?

Do they think they can ride that “Going to Pride” rocket all the way to victory, dragging pretty much the exact same platform they ran and lost on last time behind them? The current top contenders for party leader, O’Toole, MacKay and Gladu have now all said that, given the opportunity, they will scrap the federal carbon tax. They will do this despite the fact that polls (and election results) show that reducing carbon emissions to combat global warming is a priority for a lot of Canadians. They will scrap the carbon tax even though a price on carbon has proven to be a fair and sensible way to get that thing Canadians want done done.

It’s as if at some point, all the halfway credible candidates for leader of the Conservative Party of Canada got together over a round of milk and said, “OK, shrugging our national shoulders and saying, ‘I dunno, maybe we can invent something that’ll make the problem go away’ in the face of global catastrophe isn’t polling well at the moment, but that might just be because Canadians haven’t heard this shrug shouted out on a shadeless Toronto street over some 1:30 in the afternoon karaoke while they’re suffering from heatstroke.”

Sure Canadians say they want to take real concrete action to combat climate change, but Conservatives seem to be hoping that’s probably just because they haven’t experienced the fun of burning giant piles of coal at a Pride parade.

We are witnessing a Conservative attempt at rebranding, and nothing suggests that the LGBTQ community will ever see any residuals from these Pride ads.