Dear in-laws, the movies have it wrong. We couldn't live without you.

Before You Go: Dan Zaiontz says pop culture gives in-laws a bad rap—his continue to provide essential help in the raising of his three small kids 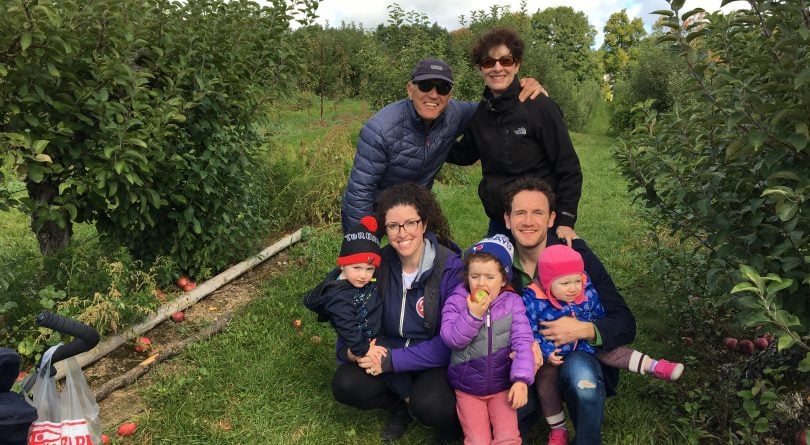 Dan Zaiontz with his wife, children and in-laws.

Pop culture has not been kind in its depictions of in-laws over the years, from Robert De Niro’s character in Meet the Parents to Fonda’s in Monster-in-Law. Fortunately, mine demonstrate every single day how inaccurate those stereotypes can be.

My father-in-law, Arnie, can sometimes be an imposing presence. He is taller than I am, but I think what I feared most, especially when Becca and I first started dating, was how he could flip from cracking jokes and chatting about the mediocrity of Toronto’s sports teams to a stern kind of look where you weren’t sure if he was about to tell you that you weren’t good enough for his only daughter.

The stakes of his seriousness never seemed higher than that summer afternoon in 2010 when I asked him and my mother-in-law, Tammy, for their blessing. I was going to ask Becca to marry me on an upcoming trip to Victoria.

READ: A mother with cancer to her children: ‘When words fail me, at least I can say I love you’

I had a feeling they knew what was coming. After all, Becca and I had been dating for five years. “Arnie, Tammy, your daughter is my best friend and my partner. I want us to build a life together. There is no one I trust, laugh with and care about more than her. I want to marry her.”

Tammy’s face lit up and she gave me a loving hug and kiss. “Of course, Daniel, this is so exciting!” she exclaimed. “Well, hang on a second here,” Arnie said. Oh no—his face, that sternness. I was prepared for him to finally tell me that his Becca Lou deserved better than the likes of me. “Now, what if I say no?”

I panicked. There was a chance he was joking, but you just never knew with him. Tammy quickly spoke up: “Arnie, that’s enough!”

“What?! I just thought I would ask,” he said. Then he smiled and even gave me a hug. Nine years later, Becca and I remain blessed.

We have three beautiful children who are as inspiring as they are demanding. Samantha (Sama for short) is four and a firecracker, a devotee of The Magic School Bus, dwarf planets and loading the dishwasher. And our twins, Rory and Max (Rora and Maxie, for those keeping track), are almost two. Rory can belt out a mean Baa, Baa, Black Sheep and likes to wear a pretend purse on pretend walks to get pretend groceries. Max is five minutes younger than Rory, likes man buns and could survive on an all-cheese diet.

READ: A daughter to her dying father: ‘Your life is full of love‘

As I am often fond of telling them, they fill our hearts with joy and we love them every day. But, holy hell, are they a lot of work, and bloody expensive, too!

Becca and I work full time. She’s also a Ph.D. student. Since the fall, we’ve been running around like a pair of crazy people—getting the kids to daycare, kindergarten and after-school programs, dealing with the constant sicknesses that come with young kids, groceries, organizing dinners, diapers, wipes, laundry, the aftermath of a tornado that often best describes the state of our home. But it is ours, this life. And absolutely none of it could possibly work without Tammy and Arnie.

Tammy, a retired public-school principal, is one of the strongest, kindest people I have ever known. My mom died of abdominal cancer when Samantha was a baby and since then, Tammy has taken it upon herself to serve as twice the grandmother—a super-bubbie, if you will. She stayed home with Sam for several months after Becca’s first maternity leave ended. She has been our greatest supporter, a first responder in a functional but smart-looking blouse. I simply cannot effectively and completely express how thankful we are for her.

And then there’s Arnie—“Zaidie” or “Zids” to our kids. The unfiltered love we see in him when he’s holding or playing with his grandchildren fills our hearts with joy. Not to mention how he helps get the kids where they need to go on weekday mornings, changes diapers, catches dangling nose boogies like a trained sniper, and babysits when we’re working late.

I know that in an instant he and Tammy would drop everything, go to any lengths (and they have) if it meant supporting their children or grandchildren. Even, and especially, their son-in-law.

For me, pop culture has it totally wrong about in-laws, because sometimes you’re blessed with the kind whom you simply could not live without.