Opinion: To many people in Toronto, the effect of a now province-wide Ford is an odd one, writes Tabatha Southey 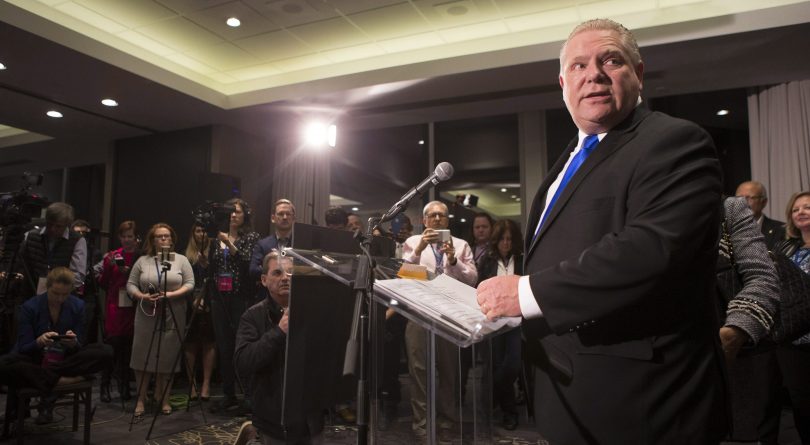 Doug Ford stands at the podium after being named as the newly elected leader of the Ontario Progressive Conservatives at the delayed Ontario PC Leadership announcement in Markham, Ont., on Saturday, March 10, 2018. THE CANADIAN PRESS/Chris Young

First of all, let me take a moment to congratulate the Ontario Progressive Conservative Party’s quickly formed “Oh, Yes, We Can Make This Worse Committee” on the event that capped off the party’s unanticipated leadership race. That really was one hell of a night.

At around 10:15 pm last Saturday—nearly three hours after everyone but the media had been told to go home—it was, shall we say, “let known” more than “announced” that Doug Ford had been chosen as the party’s new leader.

If I were to try and tell this tale artfully—to go for the Giller—I would tell this story novel-length from the perspective of one of the hundreds of celebratory balloons that had spent the night harnessed to the ceiling of the Markham hotel convention centre that housed the shindig, in anticipation of falling with glee and abandon down to the ballroom floor below. Those balloons were there to descend and mark the end of the party’s 44 days of resignations and recrudescence, grave accusations, ghost memberships and technical glitches that marred the leadership race.

These were coronation balloons, the pumped-up bunting that binds and heals, because there is both joy and finality in a falling balloon that few can deny, let alone contest in court. Instead, late in the evening, as ballot counting threatened to go Bleak House below them, those balloons were lowered unceremoniously to the floor via a scissor lift.

Press and party members waited and waited in the vast hall amid confusion and despair as the set around them was stripped down. By the time the CBC cut away from its coverage to the middle of a documentary on oil pipeline lobbying, I was expecting a man in a tattered bowler to come out and say, “We’re proud to announce that Mr. Godot will lead the Ontario Progressive Conservative Party into the coming election, just as soon as he arrives.”

The Ontario PCs’ “We’re out of the wilderness, we have a new leader!” moment never came. In tenor, the eventual announcement that Ford had won the contest was more “Friday afternoon document dump” than “Saturday night inauguration.” But there’s no question a new era has dawned, even if it brings with it a heap of déjà vu.

To many of us in Toronto, the effect of a now province-wide Ford is an odd one. Fords are like a language we studied in high school that we never imagined we’d need again. It’s as if I’ve landed in a new country to a most unexpected state of affairs and I’m surprised to discover how much Latin I remember.

It’s Doug Ford again, folks. There he is—the less addled, less addicted, but also less sympathetic brother of late Toronto mayor Rob Ford. There was Doug Ford on my radio this week, dripping with rage and condescension, lecturing CBC Ottawa Morning host Robyn Bresnahan that her questions weren’t worth answering because she had never inherited and run a label business.

Predictably, Ford’s “economic plan,” as he stated it, is to find close to $6-billion in “efficiencies.” Bresnahan enquired what exactly these efficiencies might be, a question that seemed to alarm the freshly minted PC leader, as if “efficiencies” were in fact small skittish creatures easily spooked by journalists asking questions about them.

How he plans to save money while cutting hospital wait times, taxes and hydro rates—which are not even close to being the highest in North America, as Ford likes to claim—is a fair question to put to this man. After all, he promises to, straight out of the gate, rip up a meticulously researched sex-ed curriculum for which teachers, experts and parents were extensively consulted, and build a whole new one. Among the other essential and completely un-alarming information given to our kids in the decidedly unsexy sex-ed curriculum are the correct names for what my granny used to refer to collectively as the “nether regions.”

I want to take this opportunity to say that my sweet gran also once referred to a bladder infection as a “cold in my whatnot,” and dear God—proper names are progress.

Throwing out carefully developed plans appears to be a hobby of Ford’s. His previous efforts in this field include an almost unilateral attempt to shred Toronto’s much lauded, painstakingly constructed waterfront redevelopment scheme that included a comprehensive flood protection plan. Ford expected to waltz in and relieve Waterfront Toronto—the government agency that controls that land—of its holdings in order to get a luxury hotel, a monorail, a 1.6-million-square-foot mall and a big ferris wheel plopped down on the lakefront in no time. Toronto needs all of that like a hole in the head.

As I listened to Doug Ford on the radio get more and more pissy, it all came back. This was Ford, the belligerent bully. This was the mind that had his younger brother stand on a brightly painted, comically large scale he had set up at City Hall so that his weight-loss efforts could be publicly scrutinized by the press. The “Cut the Waist” challenge ended in Rob Ford’s failure to lose the 50 pounds that was its stated goal, as well as a painful, though I imagine less painful than than the spectacle of that failure, twisted ankle—an injury that occurred when he fell off the scale as he dismounted it.

The stunt always seemed more like an attempt to amplify Doug’s own often public ridicule of his brother’s weight than a private concern over Rob’s health, as well as a showman’s move to distract from the entirely non-weight related battles the mayor was losing at council.

While being interviewed by the CBC, Doug of course wanted to pull out the old chestnut about running government like a business. On that subject, in the final year of his term as a one-term city councillor, Doug Ford was not in attendance for more than half the city council votes taken. During his brother’s four-year term as mayor he was absent for 30 per cent of the votes taken. One has to wonder what kind of business would keep a man like that on, let alone allow him to be promoted to regional manager.

There, on the radio, was the Doug Ford who told the father of a son with autism that he could “go to hell.” He also accused the man of participating in a “jihad” against him. The man had filed an integrity complaint against then-councillor Ford after he had said that a home designed to house five youths with autism, which was at the time housing three kids, had “ruined” a neighbourhood. “My heart goes out to kids with autism,” Ford reportedly said. “But no one told me they’d be leaving the house.”

Some cars had apparently been broken into in the neighbourhood, although no connection whatsoever between the autistic children Ford apparently wanted kept like Flowers in the Attic had been made. This is not to be confused with the time a window was broken on Ford’s SUV—one of the four cars this enemy of the elite had parked in the driveway at his home—and which he blamed on a non-specific political rival. Nor is this the incident where he accused then Toronto police chief Bill Blair of leaking information to the press as “payback,” which ended with Ford giving a formal apology to avoid a defamation suit.

I’d almost like to be able to the view this pattern of behaviour as springing from some deep-seated paranoia on Ford’s part. The alternative—that a man who could very well become Premier of Ontario has consciously decided to blunder through his political life spouting nonsense, posturing like a political pro-wrestling heel—is just too embarrassing to bear.

I love this province.