Did Italian food even exist before Eataly?

Corey Mintz: I question why Torontonians need another place to buy Italian food 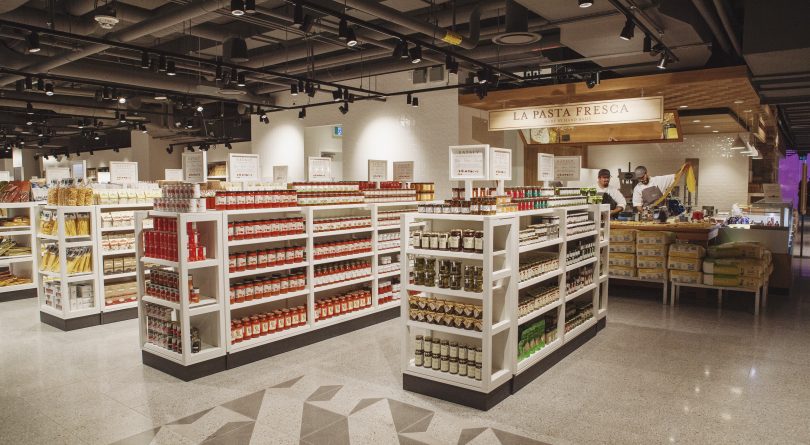 Before Eataly, the only place in Canada to buy Italian food was that time in the late 1980s when McDonald’s sold pizza.

That’s the general vibe of hype surrounding the launch of Eataly’s Toronto store, the first location in Canada for the global chain emporium selling luxury Italian food. With an initial store in Turin, Italy, the company grew into an international powerhouse through a partnership with restaurateur Mario Batali, who became the face of the brand at ribbon-cutting ceremonies (there are a half-dozen locations in the U.S. and almost 40 worldwide) and during television appearances (before his fall from grace amidst sexual misconduct allegations, Batali co-hosted a talk show called The Chew).

If you feel like you are missing out on something because you haven’t been to Eataly’s Toronto store yet, then the food hall’s public relations agency earned its pay. In the last decade, I’ve a lot of praise and attention heaped on just-opened restaurants, bought and paid for by free media dinners. But I’ve never seen a launch as successful as Eataly.

If you haven’t been to one, here’s how it works: A food business—butcher shop, cocktail bar, restaurant, et cetera—hosts a private meal for influential locals. Traditionally this is made up of people from fashion, food, TV, print, radio, and so on. Although lately these events have skewed toward the emerging career title of “influencers,” people whose job is to shill for goods and services through their online presence.

At these dinners, cocktails are followed by wine, course after course of food, more wine, and maybe a gift bag on your way out the door. If the average restaurant media dinner is like a midnight commando raid, Eataly was closer to a full battalion landing on the beach.

If you followed the #eatalytoronto tag on Instagram, you’ll have seen a series of previews, tours, events and interviews with founder Oscar Farinetti, now the face of the company, ensuring that no one associates the brand with the now-disgraced Batali, who was bought out as a minority shareholder last summer.

Guests enjoyed pizzas, pastas, prosciutto, oysters, champagne and caviar. They snapped selfies in front of the copper pot chandelier, posed with a leg of prosciutto or a giant magnum of Barolo. And they raved about the beautiful space and its amazing food.

“The highly anticipated @eatalytoronto invited me to preview the space, the food, and the vibe. Trust me when I say you HAVE to see it for yourself,” one wrote.

As with all promotional media dinners, no one reminded their audience that their fervent endorsement of the products and services, their insistence that you had to go to Eataly as soon as possible, was based on an evening of free caviar, free pasta and a river of free wine.

On the back of Eataly popularity, the pre-opening social media push, and a promise of gifts for the first 100 customers, people queued up outside the store for its opening on Nov. 13. As calculated, this generated plenty of can-you-believe-people-are-lined-up coverage. This is a standard type of media story, in which the entirely explainable occurrence of people queuing up for a product or event is reported with the same breathless wonder as a potato chip bearing the image of Jesus. These stories rarely mention the factors of market scarcity (both real and manufactured), giveaway incentives and marketing strategy, instead relying on the popular trope, “Those fools in Toronto will line up for anything.”

None of this should detract from the fact that Eataly is a terrific food store. Setting up multiple restaurants and cafes, selling the best ingredients for Italian cuisine, in a location where rent is as high as triple the rest of the city, it has to be good. But does Toronto need an Eataly?

As the fawning coverage of Eataly’s launch implies, has the emporium arrived to fill a gap in the market, the somehow underrepresented niche of Italian cuisine?

Last year, before we had a baby, my wife and I decided to take a trip to Italy. After our child was born, we figured, we’d never have a penny for travel, or be willing to spend it. We rented a car and drove around the country. Everywhere we stopped, from fresh-caught clams on the south of the Amalfi coast to Porchetta sandwiches in a highway gas station on the road to Bologna, was a gastronomic delight, somehow always better than the best version we’d eaten anywhere else.

The only disappointing meal during the whole trip was in Naples. And not because it wasn’t good. The pizza in the city known for pizza was outstanding. It’s just that the Associazione Verace Pizza Napoletana has been so successful at codifying and exporting pizza made in this exact style. If you want to call your pizza Neapolitan, you have to make it to their specifications, from the diameter (35 cm), weight of tomatoes (60 to 80 g), the thickness in centre (0.25 cm). This precise style of pizza might have been rare a decade ago, when Pizzeria Libretto launched. But you can now find Neapolitan pizza all over Toronto—Viva Napoli, Pizzeria Via Mercanti, Queen Margherita Pizza, Pizza e Pazzi. So when we bit into the pizza in Naples, there was a letdown. We realized that, as great as it was, we’d been spoiled because we could get this exact thing down the street from our home in Toronto.

The Torontonian who rides their bike to Grace Meats for the still-warm ricotta made on Fridays, grabs a bottle or bomba from Festival Fine Foods across the street, or scoots up to Famiglia Baldassarre for some fresh cappellacci, is probably going to keep doing that. You don’t need 50,000 square feet of retail space to pick out a bottle of olive oil.

Toronto has no shortage of fantastic Italian restaurants and shops. I’m writing this from a suburb of Winnipeg, and I can tell you that the Sobeys in Birds Hill, Man., has not one, but two varieties of buffalo mozzarella. You can find excellent Neapolitan style pizza here, and all across Canada—Italian is the world’s most popular cuisine.

But Eataly isn’t about filling a vacuum for Italian food, it’s about serving an affluent target customer. Any time a big international food name opens in Toronto (Boulud, Chang, Conant), they are asked why they picked the city. And the answers are always about how sophisticated and multicultural Torontonians are. It’s nice to be flattered. But people open up businesses in Toronto to make money. Toronto spends money and is also increasingly a tourist destination. That’s why mayors like John Tory show up for Eataly openings.

A couple years after Eataly launched in New York, I wandered through the space. I was impressed, moved even, as many of the Toronto guests have been, by the store’s expansiveness, by the pristine displays of produce, cheeses and meats. The presentation, lighting and cabinetry felt closer to the beauty and reverence of a museum than the practicality of a store. But even then, I questioned why New Yorkers needed another place to buy Italian food. They don’t.