'Do not put that evil person in such a prominent spot!' 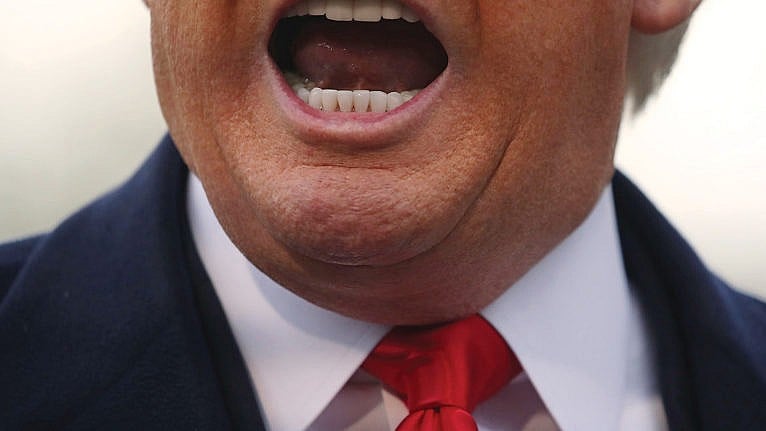 In October, Shannon Gormley recorded as many so-called accomplishments of the Trump era as could fit in three pages of Maclean’s in a tiny font.

It was likely impossible to condense Trump’s transgressions to three full pages of readable font. But in the future, if it’s not possible to fix layout issues, please include a magnifying glass.
—Elizabeth Gregoire, Shawinigan, Que.

I thought it prudent to compose a rebuttal to Shannon Gormley’s comprehensive list of what Donald Trump has done. After all, your readers seek balanced coverage. But perhaps you need a minimum number of words to publish a response, and I could never meet that criteria.
—David Watson, London, Ont.

Gormley’s article on all the things Trump has said and done over his presidency was brilliant. Halfway through I found myself laughing because it was so overwhelming: I didn’t realize how much damage he has done in such a short time. Like millions of others, I shudder in horror at how he managed to ever get elected.
—George Bain, Winnipeg

It would be far more informative if you would focus on our Prime Minister and present what he has done in the same format as you have done with President Trump. As a Canadian, I don’t feel I have the right to malign the leader of another country in which I do not have a voice. The list of negative things our Prime Minister has done to our country far outweighs what the U.S. president has done.
—Margaret Ann Dyer, Calgary

I just received the November issue of Maclean’s and had to immediately tear and shred the Donald Trump cover. Do not put that evil person in such a prominent spot and spoil my magazine!
—John and Elsie Boersma, Ridgeway, Ont.

In September, Contributing Editor Adnan R. Khan wrote that Trump’s paranoid gang of conspiracy theorists were armed and angry, preparing for war—and it was starting to feel downright apocalyptic in America.

Some conspiracists who closely follow President Trump believe his Twitter messages may contain code. This includes abnormal capitalization and purposeful typos. The concealed, carefully considered words are to inform these supporters about criminal or morally suspect acts. Some time ago President Trump wrote “unprecedented” as “unpresidented.” All I see is bad spelling.
—Mel Simoneau, Gatineau, Que.

I was saddened, though not surprised, to see how your article on housing characterized the continual rise in housing costs even in the midst of a global pandemic and recession (“The property puzzle,” Coronavirus, October 2020). If the costs of food, medicine or education were increasing by double-digit percentages, then no magazine would describe this as something that “offers some economic optimism.” Housing, though, has come to be seen as speculative investment first and basic human need second. For me, the trends you observe are cause for deep pessimism. My girlfriend and I are professionals in our early 30s. We earn decent salaries and live a frugal lifestyle. And yet the idea of buying a home in our home city of Ottawa feels beyond our wildest dreams. Even rental costs have gone so high that we have decided to cross the river to avail ourselves of cheaper, more rent-controlled lodgings in Gatineau. Imagine how this housing crisis must feel to all those minimum-wage-earning essential workers who have kept our society functioning for the last six months. Maclean’s has done an admirable job telling the stories of marginalized groups during recent months. One way to build on that success would be to consider how these kinds of economic trends affect those groups, rather than just focusing on the interests of those who stand to make a profit.
—Cameron Roberts, Gatineau, Que.

In November, Contributing Editor Jen Gerson wrote that it’s difficult for someone today, subject to countless videos of police abuse, to wrap our heads around the idea of Peelian principles—but the Metropolitan Police Act of 1829 created a liberal institution.

I read Jen Gerson’s article regarding her view that Peel’s principles of policing should be applied to the current model of policing in Canada. As a former police officer with over 30 years’ experience, I can say that Peel’s principles are alive and well. They are studied by police recruits extensively very early in their training and careers. Police officers are then expected to apply these ideals during the course of their duties through their participation in such processes as community consultative groups, and following through with the resultant community policing strategic priorities. Peel’s principles are further emphasized during the annual course on the use of force, cultural awareness training, violence in relationships and the like. While Gerson’s article is an interesting historical refresher, it does not suggest anything constructive. It could have examined the systemic racism regarding the causal factors of crime, such as poverty and lack of education, which, being more predominant in Indigenous communities, in turn leads to disproportionate representation of those communities in all levels of the criminal justice system. It could also have made suggestions on how to better use already stretched police resources to deal with essentially non-criminal matters such as addiction, homelessness or mental health crises.
—Douglas Hogg, Nanaimo, B.C.

In October, Contributing Editor Stephen Maher wrote that Mi’kmaq fishers won at the Supreme Court decades ago, but they’re still fighting for their livelihoods.

In the 1700s, when treaties were first signed between European settlers and Indigenous people in Nova Scotia, fewer than 50,000 people occupied that landscape. Obviously, times have changed drastically, yet some people keep clinging to archaic and naive views of the world. Governments routinely rewrite and reform treaties to accommodate today’s conditions and issues—take NAFTA, for example—because the majority of citizens presumably benefit. It is time to rewrite those treaties of the 1700s, treaties that could not possibly have foreseen today’s complications. There are now millions who depend on natural resources like fisheries. Technology (e.g., 40-foot boats and advanced fishing gear) makes overharvest a daily threat. The most absurd idea being floated today is that of another fisheries management board, this one run by the Public Service and First Nations, with no mention of the majority non-Indigenous fishermen. Such redundancy will further complicate management and conservation, and isolate most fishermen. It is long overdue that Canadians demand our governments stop capitulating to Indigenous demands for special-interest management authority.
—Brian L. Horejsi, Penticton, B.C., and Calgary

In November, the editorial in our print issue argued that while physical isolation is key to the current approach to fighting COVID-19, it is also a significant causal factor in mental and physical problems among the elderly.

The “tangled regulatory burden” is not the only obstacle to decent long-term care for our elderly and other folks. The Village in Langley, B.C., which you mention, has monthly charges ranging from $7,500 to $10,000. Many care homes charge $4,000 to $5,000 per month. And, as with any family home, there are deep, dark secrets of abuse, neglect and assaults of seniors and those with dementia. Thanks to the media, we are shown the horrors and the agony of the guilt that family members must now carry because they trusted in the care-home model for their loved ones. We watch TV commercials for dogs consigned to a loveless, horrifying existence because of the greed of puppy-mill owners. While many good people do work and care for their residents (and they need to be recognized), the burden of care has clearly resulted in a level of resident satisfaction that has nothing in common with ads showing the always grinning, active, well-fed resident.
—Debra Ann Sullivan, Qualicum Beach, B.C.

There has been a lot of discussion lately on what we as a society should do to improve long-term care. Despite the hullabaloo, many care workers are still being abused by private long-term care operators, who use “temporary” workers to make their profits, since that allows them to pay very poor wages and provide few, if any, benefits. The provincial government here in B.C., for its part, is satisfied to continue subsidizing private, profit-seeking companies to care for our elderly and disabled people. I thought the NDP still believed in at least a small amount of socialism, but apparently that’s no longer part of its doctrine. The federal government is not willing to consider stepping into a provincial jurisdiction to come up with a national solution. Considering nearly 80 per cent of Canadians who have died from COVID-19 were residents of long-term care homes, maybe it’s time to change that term. Perhaps “short-term care homes” would be more appropriate.
—Rod Retzlaff, Glade, B.C.

In October, Associate Editor Prajakta Dhopade wrote that a B.C. program that waives tuition can be critical to access higher education, but the initiative—introduced in 2017—is not without its gaps.

As a former child protection social worker in British Columbia, I am always interested (and often horrified) by the news about youth in government care. Offering a tuition waiver program to youth in care is a good news story. The former youths in care highlighted in the article are a testament to their strength and courage. But I was glad that the author, Prajakta Dhopade, included a paragraph on the horrendous statistics for youth in care, the majority of whom are Indigenous. Because of those statistics, I keep waiting for the defund movement to hit child protection, particularly in the area of foster care and the expensive legal system that operates alongside children in care. The endless recommendations from the many inquiries and reports commissioned after the death of a youth or young adult who aged out of the foster care system never fully tackle the monster that lives beneath these children’s beds. Yes, there are some great foster parents and social workers, but they can’t make up for the loss of one’s birth family. It is the rare child in care who remains in one foster home, so the losses become compounded, leading to the statistics cited in the article—a death rate five times that of other youth, and high rates of homelessness, poverty and addiction. Foster homes are necessary for emergencies but they should never be considered a long-term option. Progressive programs like family group conferencing (adapted from a model used by the Maori people of New Zealand) and other family-driven collaborative processes, as well as more financial support for family members caring for their relatives, are now available. It is time to put those programs at the centre of decision-making for children.
—Laura Jones, New Westminster, B.C.

From WE to they

In September, Marie-Danielle Smith, Aaron Hutchins, Jason Markusoff and Claire Brownell traced the rise and fall of WE Charity.

What bothers me about charities like the one the Kielburgers started is this idea, expressed in your story by Elizabeth Gomery of the charity consultancy Philanthropica, “This whole notion of having people come in to ‘save’ them is rooted in the idea that the communities don’t know what their problems are in the first place. It is deeply patronizing.” Today it’s almost sacrilegious for a Canadian to say “charity begins at home.” But before we send well-meaning young people off to improve the lives of youth in other countries, how about getting them to volunteer their efforts with some of our very needy young people in many places in Canada?
—Dorothy Low, Richmond Hill, Ont.