Don Cherry was an unchanging man in a changing world. Finally, the world caught him out.

Cherry's antiquated ideas about being Canadian and about the place of violence in hockey made him both off-putting and irrelevant. Hockey could learn from his exit. 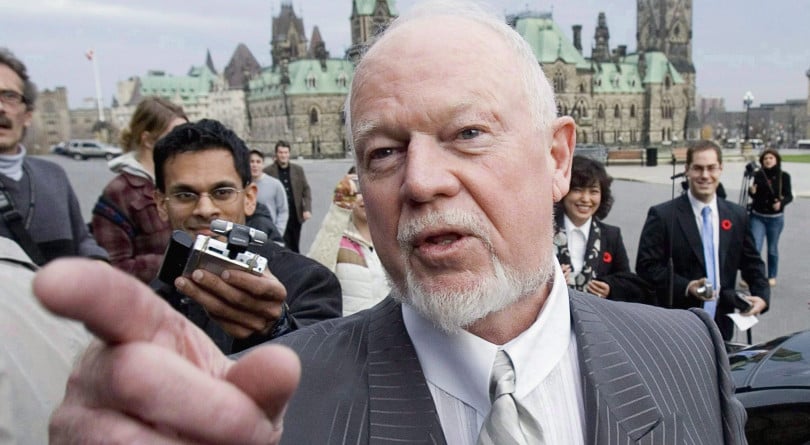 Cherry talks with reporters outside the Parliament buildings in Ottawa in 2006. Cherry was fired from his job on Coach's Corner earlier this month. (Tom Hanson/CP)

Brett Popplewell is an author and assistant professor of journalism at Carleton University. His writing has appeared in Bloomberg Businessweek, Mother Jones and The Best American Sports Writing.

It’s a rarity in professional hockey that anyone gets to choose how they go out. For every Ray Bourque who raised the Stanley Cup and then skated into retirement, there is a Doug Gilmour who left the ice on his knees. Most, however, finish their careers in far less memorable fashion—having aged beyond their usefulness, they end up scratched from a team on which they no longer belong.

Depending on your age, background or political leaning, you will see Don Cherry’s recent firing through one of these lenses.

To the diminished few still willing to parrot Cherry on social media, the man once voted the seventh-greatest Canadian, went “out on his shield” having shouted his way through one last Coach’s Corner before unapologetically bantering into retirement.

To his detractors, there was poetic justice to his dismissal. The self-appointed defender of the poppy was fired, unceremoniously, just after the 11th hour on the 11th day.

More than anything else, Cherry embodied a problematic icon—the unchanging man in a changing world. He was hockey’s version of Chief Wahoo—the former Cleveland Indians logo. Offensive, yet somehow accepted, for an inexplicably long time.

Throughout his tenure on Coach’s Corner, Don Cherry worked to glorify hockey into something more than what it is: a waning sport struggling to adapt. Its biggest appeal may be among fans who derive a sense of pride in our apparent superiority over other nations whose people just can’t slap a puck around as well as we can.

Cherry became a symbol for a game where “good” Canadian “guys” deserved respect, and where respect was earned through violent retribution and name calling. This, among his fans, also became part of what defined their Canadianism. But for many others, it made him both off-putting and, ultimately, irrelevant, in a way that hockey still risks becoming, even now that he’s gone.

The spectacle may have evolved beyond the goon squads of the Rock ’Em Sock ’Em years, but the culture surrounding the sport remains impacted by the legacy of that brand. It’s a brand that still resonates with countless people, even if it is now so antiquated that most of us can’t remember when his blazers were actual blazers instead of repurposed drapes by another name.

A generation of players has come and gone since we learned that Rock ’Em Sock ’Em hockey was causing brain injuries. Yet through it all Cherry continued to advocate for the violence. And even after it was clear that hockey was adrift in an increasingly diverse Canada, he remained a face of the sport’s flagship broadcast.

Back in 2015, I was a senior writer with Sportsnet magazine and had a chance to go behind the scenes of Coach’s Corner. Sportsnet owned the rights to the show and had been implementing a series of changes to the programming. Almost everything that had been part of the old CBC broadcast had changed, except for Coach’s Corner.

I will always remember the show crew’s genuine affection for the former coach whom they described as a softy at heart even if he played a tough guy on TV. But I will also remember some of the less-than-stellar things Cherry shouted while I scribbled into my notebook. Words that revealed how an old man could really hang himself with his own tongue.

The entire production of Coach’s Corner was dependent on every member of the crew coming together to help the then-81-year-old Cherry channel the same image of a tough bombast who once endeared himself to a mass of mostly boys, both young and old. The stage lights needed to be set exactly how Cherry liked them: flooding against his back, accentuating the cut of his shoulder pads, ensuring he looked as tough at 81 as he did when he first went on the air in his late 40s. It mattered less what Cherry actually said, so long as he looked tough while saying it.

When the time came for the ranting to begin, the only other thing that mattered was that Cherry be allowed to believe that everyone, everywhere, was tuned in and listening. That’s why he couldn’t handle there being anyone other than a dutifully still cameraman within his sightline. (Cherry once lost it after a technician sat down in the periphery of his vision and proceeded to eat ice cream during a taping in the 1980s.)

RELATED: The truth about concussions

That’s how the most popular and polarizing TV segment in Canadian sport was put together, week after week, year after year.

As a country, we seem only now to be asking how much damage all that ranting may have caused. There’s no way to gauge how many would-be stars of the game may have felt excluded by the culture which Cherry helped enshrine into Canadian hockey through his 38 years of divisive commentary.

In his last broadcast on Nov. 9, Cherry might not have even offended as many people as he has in the past. But after referring to immigrants as “you people” and lashing out at those who do not wear a poppy on Remembrance Day, his presence in the game was finally deemed indefensible. His words though will unfortunately linger, the damage extending beyond Cherry or what he symbolized. The tragic irony in all of this is that in trying to defend the poppy, Cherry may have damaged it as well.

It has been a long time since I tuned into Hockey Night in Canada with any regularity. Even longer since I cheered for a debilitating hit or on-ice fight. I haven’t felt much affection for the game since I sat down as a journalist with Derek Boogaard’s roommate and learned how the NHL’s most feared enforcer had spiralled toward death in the wake of post-concussion syndrome. The thought of celebrating a game that put so many brains on ice in laboratories has seemed off-putting ever since.

I still wear the poppy on Remembrance Day. The thought that it might now forever be associated with Cherry’s politics is unfortunate. I have always worn it for my grandfather, a sergeant major in the Second World War who fought in the battle of Ortona and whose stories I listened to as a child. He wasn’t the bantering type and he didn’t play a tough guy in real life or on TV. But he did tell me a story I think of every Remembrance Day about how he spent Christmas 1943, seeking refuge in an Ortona church, peeling a dead body off of a pew so he could lie down, only to watch as one of his soldiers walked up to the tabernacle and slipped a golden chalice into his bag. It wasn’t until another ranking officer spoke up that the looting stopped.

There were no heroes or martyrs in that story. But there was a message I reflect on now: there’s no sense glorifying who we once were or what we once did when all we’ve ever been is imperfect.