Tabatha Southey: No one would play the Ghost of Christmas Yet To Come until a Trump insider—who's already taking on another big job—finally took the gig 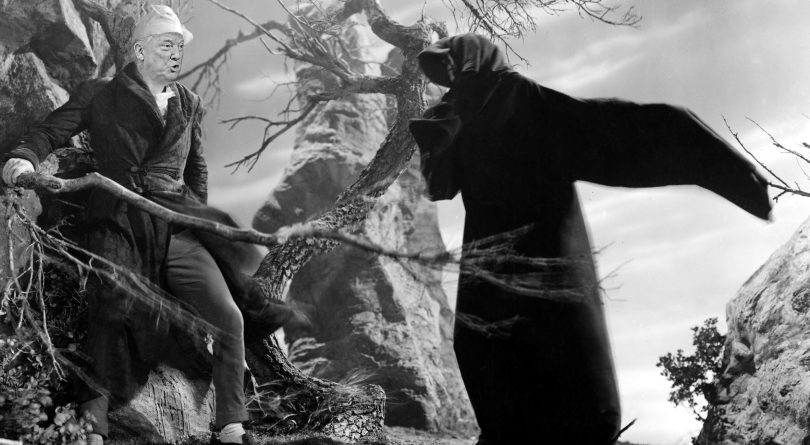 It’s that time of year. Stockings hang by the fireplace, gifts wait under trees bright with lights, and the restless spirits of the dead take a break from their unending torment to convince unpleasant people to buy poultry for their employees.

On that note, and because literally nothing involving his administration goes unleaked, I have got my hands on a recording of President Donald J. Trump’s visitation by the Three Ghosts of Christmas, which I will now describe.

“Oooooooohhhhhhh,” moans a barely visible spectral figure, “ooooooooooohhhh,” and then the unearthly presence of the spirit turns much of the video to static.

“Could you move back a bit, your unearthly presence is turning much of my video to static,” calls a voice from offscreen.

“Ohhhhhhhhh, I’m sooooooooooorry,” says the ghost, moving back away from the camera, “is that any beeeeeeetterrrrr.”

“Great! Thanks!” says the unseen camera wielder, “now just carry on haunting like I’m even not here.”

Suddenly, a startled cry breaks the not-silence of the winter’s night: “Who are you?” This voice is unmistakably that of President Donald Trump.

Trump, very presidentially staying on-prompter, responds, “OK, who were you?”

“In life I was your partner…well, no actually, I am the ghost of an early 19th-century banker. My name was Jacob Marley. I’ll also be your spoooooky door knocker for this evening. Fact is, nobody who’s actually had to work with you was willing to spend one more night talking to you, even if it meant getting out of hell.

” ‘Nooooooo, I’m gooooood,’ was the general response from the lake of eternal fire. That and, ‘Hey, Trump still owes my money!’ But that’s not important right now,” Marley says, shaking his heavy chain. “What matters is that as part of my penance I am here tonight to warn you that you have yet a chance and hope of escaping my fate. A chance and hope of my procuring, Donald.”

“Don’t worry about it,” says the president.

“Don’t worry about it. I have lots of cufflinks, all the cufflinks I could need, the best cufflinks, I would never forget them and have to borrow ugly cufflinks like those. Worst case, I send someone out to buy new cufflinks. I have totally, 100-per-cent escaped your fate already,” the president tells the ghost with some satisfaction.

“What? No, this is the chain I forged in life. I made it link by link, and yard by yard; I girded it on of my own free will, and of my own free will I wear it. Is its pattern strange to you? Or would you know,” pursues the ghost, “the weight and length of the strong coil you bear yourself? It is full and heavy and as long as this…”

“Trump Chains. You make the chains, I put my name on them, do some TV spots. We’ll sell millions.”

“No, what I’m trying to say is you still have a chance to avoid my wretched fate in the afterlife,” Marley says while plaintively shaking his chain like a man signalling for the cheque.

“You mean I could end up walking around like you, with those awful cuffl… chains weighing me down forever? Haunting others as a warning not to end up like me?” says the suddenly less confident president.

“Well, there’s some debate over whether you can damn a sitting president, so it’s more likely you’d end up an unindicted co-phantasm,” Marley explains.

“OK,” says Trump, “but before that, I’ve been thinking. Just listen. Three words; Trump. Tower. Dis. I feel like I’d have real chemistry with Lucifer.”

RELATED: Will America recover from Donald Trump and the Reign of Lies?

“Never miiiiiiiiind,” moans the now-substantially-more-tortured-spirit. “Let’s just moooooove on from the dire personal warning and get to the Christmas Ghosts. You will be haunted by three spirits and are now officially their problem, not mine.” And just as suddenly as he appeared, the spectre vanishes and in his place stands a strange figure, like a child, yet not so like a child as like an old man, viewed through some supernatural medium, which gives him the appearance of having receded from the view.

“Noooooooo, I am the Ghost of Christmas Past. I have come to show you…you’re not going to learn anything from the past, are you?” says the spirit.

The ghost and the president stand in awkward silence for a long time, until finally the silence is broken, and Marley appears again with a crash of thunder. He whispers something in the Ghost of Christmas Past’s ear, does an obligatory, half-hearted chain rattle, then makes his much quieter exit through the door.

The room returns to awkward silence until the president flips on the TV and the comforting seasonal sound of four or five talking heads on CNN trying to discuss a racist without using the word “racist” fills the room.

“Ah, now that’s a good idea!” says the ghost. “To be honest, I don’t really conjure up the present very well, but CNN can do the showing and I’ll just fill in with the ominous portents.” He sits on the the edge of Trump’s bed.

At this the spirit jumps up, raises a frightful cry, and shakes its chain with such a dismal and appalling noise, then sighs, “The TV is right in front of you. It is tuned to CNN. You are watching CNN right now.”

“OK then,” says the ghost, shaking his head at the TV. “So, it seems like the current state of the present is… wow… your personal lawyer and fixer has told the Special Counsel investigating you everything he knows not only out of a desire to save his own skin but also out of a drive to get back at you for leaving him out in the cold.

“I got nothing for that. I can’t really help you here. Let’s try a different channel,” the ghost says, grabbing the remote “and…OK…nope. NBC reports Michael Flynn, retired general turned crazy Fox News grampa, turned your national security adviser, is also talking to the feds, and the judge at his sentencing hearing just saw his own shadow and sent your man back for three more months of co-operation.

“Your present is looking pretty bleak and I don’t have a lot to add. Let’s just say if there’s a Tiny Tim in your life he’s probably already cut a deal to plead guilty to failure to register as a foreign agent and lying to the FBI to shave a couple years off his sentence. I’m just going to moooooosey on back to the spirit world before someone kicks the door in. I leave you in the care of the Ghost of Christmas Yet to Come.”

And with that, the Reluctant Stand-In Ghost of Christmas Present fades from few.

For a long while. The room is silent, but for the sound of the filmer searching through a camera bag for an external battery.

Then, there is a noise. A terrible, wheezing noise just outside the door. Slowly, ever so slowly, the portal creaks open. A figure stands beyond it. “Arrrrgh. Uuuuuuuuugh.” The figure gives out an inhuman groan. Slowly, one hand outstretched, as if grasping blindly for its prey, the horrid apparition makes its way through the door.

“Sorry, Mr. President, I’m a bit out of breath, had to run down here. I’m keeping a lot of balls in the air just now,” his figure says between desperate gasps.

At this, the president breaks his silence, “Mick Mulvaney? What are you doing here?”

“Well, it turns out they couldn’t get more than two Ghosts of Christmas to take this Trump job, so they came to me,” says the terrible figure. “So now I’m Director of the Office of Management and Budget, Acting White House Chief of Staff and Acting Ghost of Christmas Yet to Come. Now behold, the large print, well-illustrated bullet points of your fate!”

“Hey, wait a second, is that me, lying dead on the bed, and is my hair OK?” Trump gestures at one of said illustrations.

“And those women,” he points to the next picture, “are they arguing over who will get to take my curtains with my body lying right there?”

“No,” says Mulvaney, “they’re members of your cleaning staff and they’re arguing over who will have the job of throwing your curtains out. They’re worried someone might get a picture of them carrying the curtains off and post it on Twitter, where’d they will inevitably go viral as Bad Taste in Curtains Lady. There is, however, some interest in your tie as a hall runner.”

RELATED: In the age of Donald Trump, trump gets a bad rap

“This is horrible. I have to do something!” Trump cries out.

“Really, seriously?” asks Mulvaney. “I did it? I actually showed you the error of your ways and convinced you to change them?”

“Yes, you have!” Trump wails leaping from his bed. “I can’t be that man. There’s only one thing I can do.”

“You’re going to acknowledge the reality of climate change and work to fight it?” prompts Mulvaney.

“No!” says the president.

“Huh? No. Love the idea, but I already got caught making a charity into a slush fund for business and campaign expenses,”says Trump.

“You’re going to reject racism and work to reform U.S. immigration policy to the benefit of both the nation and those who want to be contribute to it?” the acting ghost tries again.

No!” says the president. “I’m going to fire all my staff and start hiring from scratch, and this time we’ll have Extreme Vetting, a complete and total shutdown of people who don’t appreciate my taste in draperies entering my employment!”

“God bless leakers, everyone!” says the voice from behind the camera as the recording comes to an end.