Donald Trump has a secret identity 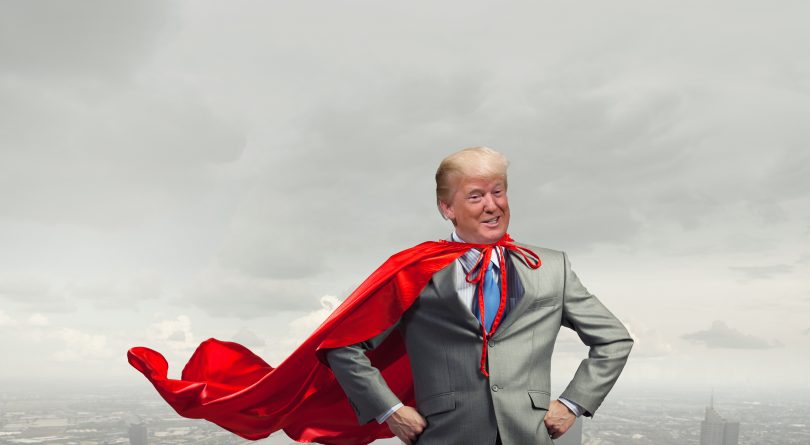 President Donald Trump revealed his secret identity this week, and while his cover as a socialite and businessman always seemed like a front for something, few would have guessed that Trump is in fact that mysterious figure, that shadowy champion of bad trade policy, the hero we neither need nor deserve right now: Tariff Man.

“I am a Tariff Man. When people or countries come in to raid the great wealth of our Nation, I want them to pay for the privilege of doing so. It will always be the best way to max out our economic power. We are now taking in $billions in Tariffs. MAKE AMERICA RICH AGAIN,” Trump tweeted on Wednesday.

I have been sent the surveillance tape of Tariff Man’s subsequent meeting with the multi-multiverse superheroes and supervillains, a meeting to which, my superhero source informed me, Trump was not so much “summoned to” as “could not be convinced to leave. Apparently a total lack of social graces and firm belief that everything is about him can make a man literally impossible to remove from a party he wasn’t invited to. And yes, Dr. Strange tried the ‘open a magic portal to Siberia under his feet’ trick.”

I have transcribed the meeting for the historical record.

“So let me get this straight, exposure to radioactive levels of privilege as a child and then surviving multiple bankruptcies, which should have left you horrifically burnt or perhaps completely vaporized, have given you the power to tank the stock market in a single tweet?” began Wonder Woman, “and you think this gets you into the League of…”

“To be fair, Diana, we’re talking subatomic levels of self-awareness here,” interrupted Tony Stark, because even if you’re Wonder Woman, “it’s been fused with a type of economic illiteracy we’ve been unable to replicate in the lab and our test subjects are naked mole rats.”

“I’ve talked to cuttlefish with a firmer grasp of trade policy than this guy,” said Aquaman, “and of course the average octopus will go so far as to tell you that’s not how tariffs work. The U.S. may generate some revenue from tariffs, sure, but not billions, and the cost of tariffs is one that will be borne by U.S. consumers.”

“Hey Thor, I just want to say I’ve got a new golf club,” said Trump. “It’s a lot better. I mean a lot of people are saying it’s a lot better than your golf club, which cannot be picked up even by someone who would totally ‘be worthy’ like myself. Also my club has my name on it instead of runes of power, which, and a lot of people don’t know this, aren’t in English.

“So what I’m saying here is I could get you a new Tariff Man Executive Golf Club if you could just get me a meeting with Batman! I think we’d have a tremendous relationship and maybe then he’d stop beating up my good friend Mr. The Penguin, who will make a great Chair of the Federal Reserve, if Batman and his Angry Conflicted Bat Family will stop getting him locked up in Arkham Asylum.”

“OK, sure, whatever,” said Batman in a low, guttural tone, peering down from his favourite perching gargoyle. “I’m right here. I’m everywhere. Because I’m Batman.”

“We’ve got great chemistry,” Trump said. “I feel that. We have a lot in common. You witnessed your father being murdered in a dark alley, I saw my father have to reach a settlement with the Department of Justice in which he had to promise to stop discriminating against black people who tried to rent in his buildings. Also, I, an innocent boy of 27, had to sign that settlement too. It changes you. It instills in you the desire to stop others from suffering a similar fate of ever having to promise to not be racist.”

“Oh, look, it’s the Draft Dodger!” said Black Widow, flipping into the room, across the room, up to the ceiling, back down again, kicking Trump’s hand away from Thor’s hammer and then tweaking Trump’s nose, as only a Russian can do without consequence, it seems. “Careful, boys, or he’ll activate his bone spurs.”

“I have other powers, great powers, the best powers!” Trump yelled. “My inhumanly ill-informed and super strongly held opinions are invincible! They’re what got me elected! I read it on my sworn statement, and my ignoratium-coated skull cannot be pierced by even the most expert of advice. Put me in a room with experts and I make their ears bleed, and when I say things like, ‘Just run the presses—print money‘ to get rid of the national debt, I melt economists’ brains! I’m only doing this to make America great again.”

“Put your Lasso of Truth on him, Diana,” said Stark.

“Doooo it!” said Batman, as darkly as anyone can say. “Doooo it!”

“Excellent!” said Black Panther. “And when did Batman and Stark get so buddy-buddy? I thought those two hated each other.”

“That’s all in the past,” Batman growled ominously. “Sure, Tony here stole my ‘billionaire playboy with fancy toys’ shtick, but there’s room in the infinite comic book multiverse for two characters whose ‘superpower’ entry on their fan wiki just reads ‘Capitalism.’ Because, quite honestly, meeting Tariff Man here makes all rich dicks look better by comparison. Plus, unlike you guys, I was in the DC superhero movies people actually watched, so I don’t need to feel insecure.”

“Just because you’re giant, blue and naked doesn’t make it OK to lie,” Wonder Woman cut in. “People saying they thought the opening credits were pretty cool doesn’t count as liking your movie. Also, do you really count as a DC character? Watchmen might have been published by DC, but it was an original story set in an original universe. What I’m saying here is, either way, you don’t count as a character from a good DC movie.”

“Hah, now it is you who are wrong, Wonder Woman,” Dr. Manhattan replied. “The 2017 sequel to Watchmen, made entirely without the original creator’s involvement, firmly established Watchmen as taking place within the broader DC multiverse!”

“Even you don’t buy that,” said Wonder Woman, making an obscene gesture with her finger and one of her Bracelets of Submission.

“Fine,” sulked the nigh-omnipotent superbeing. “You may be the only non-Bat themed DC hero to be in a watchable movie since 1980, but at least I wasn’t in Justice League. Anyway, as I was going to say, Infinity Pointless Trade Wars is going to bomb harder than Suicide Squad.”

“I’m going to pop out and grab coffee, you guys want anything?” Batman whispered darkly from the shadows.