Donald Trump made an offer that Ukraine couldn't refuse

Tabatha Southey: Some have compared the U.S. president's conversation with Volodymyr Zelensky to a mob shakedown. But is that fair to mobsters? 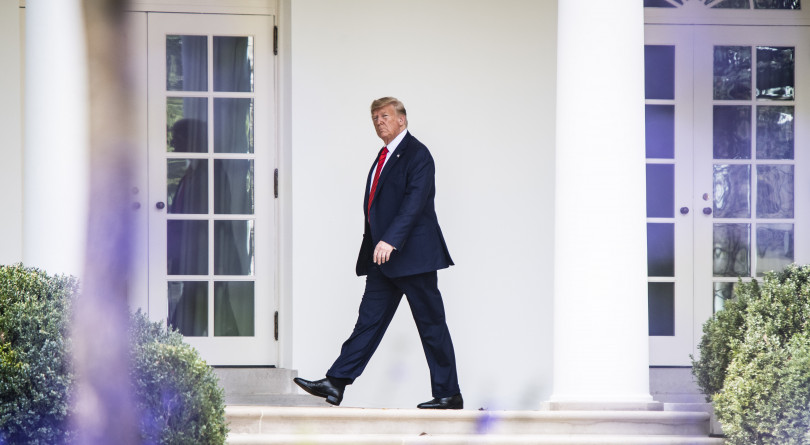 President Donald J. Trump walks along the Colonnade from Marine One to the Oval Office as he returns at the White House on Thursday, Sept 26, 2019 in Washington, DC. (Photo by Jabin Botsford/The Washington Post via Getty Images)

This week, a lot of people have been comparing President Donald Trump’s just-revealed behaviour to that of a cliché movie mobster shaking down a shopkeeper.

On Wednesday morning, the White House released a memorandum recounting the president’s July 25 call with Ukraine’s President Volodymyr Zelensky. That’s the call behind the whistleblower complaint in the story the Washington Post broke on Sept. 18. The whistleblower expresses alarm about an action of Trump’s involving a “promise” made by the president during a conversation with a foreign leader.

The memorandum reads like a transcript, or possibly a draft script for The Godfather Part DCCCXLVI, and its release is a bit of a puzzler because one has to wonder where an administration’s collective head would have to be at to think that releasing this document would change the channel.

Because it did not change the channel. This release stayed on the channel, turned up the volume, lost the remote, broke the channel-changing knob (look, I’m not the one taking America back to the mid-1970s), and then stole the only pliers that could still do the trick and threw them in the river.

Read that memorandum and the first thought that will come into your head is, “If Trump will release this, what the hell is in his tax returns? Was he taking casualty loss deductions on human sacrifice?”

This memorandum is the least exonerating document since If I Did It and the lingering question is, why release it?

Only the day before, Trump seemed to be trying to make the whole thing go away quietly, like a good, and well paid-off, adult film actress. He had, apparently, reached out to Speaker Nancy Pelosi to suggest that a compromise on releasing the whistleblower complaint might be found. After all, it was sparking a renewed impeachment inquiry, one that has since caught fire among hitherto damp Democrats..

MSNBC’s Heidi Przybyla reported that Trump called Pelosi on Tuesday and actually said, “Hey, can we do something about this whistleblower complaint? Can we work something out?”

Trump seemed to be, at least briefly, under the impression that he could avoid an impeachment inquiry—the ultimate bad Google review—by saying, “I’m sorry for the inconvenience, lawlessness and total disregard for constitutional norms, mam,” and offering to comp the speaker’s room.

It’s difficult to imagine anything Trump could have released that would have been more damaging—a thousand white doves with deadly white dove disease, a hip-hop album, BEEEEEEEES!—none of them could touch this.

RELATED: When it comes to friends, Donald Trump needs only the bare minimum

With this release Trump has answered the question that has been plaguing many Americans: “Exactly what is he going to be impeached for, and why is this a multiple-choice question?” And, no, all of the above is likely not a good strategic answer.

In that phone call Trump attempts to use government resources to pressure a foreign leader into—stop me if you’ve heard this one before—providing him with damaging information about a political rival, information he hopes will benefit him in an election.

To paraphrase Marx, history repeats itself, once as tragedy, twice as election strategy.

In the call, President Zelensky asks the U.S. to provide previously promised, and then suddenly withheld, military aid to Ukraine, specifically so that the beleaguered, indeed, invaded, country can buy more Javelin anti-tank missiles to put to use in their ongoing conflict with Russian-backed separatists.

In short, yes, the words, “Nice post-Soviet state you’ve got there, shame if someone were to…withhold aid right when you most needs help in the face of Russian aggression” do spring to mind. As the chairman of the U.S. House Intelligence Committee, Adam Schiff, put it, “The transcript of the call reads like a classic mob shakedown.”

Still, not everyone agrees with this comparison; some have suggested it’s insulting to compare a sitting president to a Mafioso. To help settle the question, I enlisted the help of Tony “Crimedoer” McMobsterface (a working name), Licensed Professional Cliché Mafia Type.

“Listen to these guys,” Tony jumped in before I could even finish showing him a selection of tweets and clips. “Like a mob shakedown,” they complain. “The nerve!” he said, slamming down his glass of Ruffino Chianti Riserva Ducale on his massive, shiny oak desk. “That wasn’t like any mob shakedown I’ve ever seen. You wanna know if comparing that call to a mob shakedown is insulting? Yes, it’s insulting, it’s insulting to me!”

“Would you describe it as more of a…” I began to ask.

“That ‘shakedown’ wouldn’t fly in a homeowners’ association!” Tony interrupted “The problem is, guys like Trump think they can just walk in off the street and start shaking down people, or Eastern European nations, on day one! But it don’t work like that. You wanna shake people down, you gotta put the work in. Learn the trade.”

“Is there a large academic component to shakedowns?” I asked him.

“Oh yeah. At least a six-month classroom course and then after that you get to shadow a Licensed Down-Shaker in the field for another two, and then finally you get to take the WISEG-I accreditation exam.

“Piece of advice, girlie, you ever get that far, be prepared; they always get you on the practical section. Right when you think you’re done, that you’ve nailed it, they make you shake down a guy while parallel parking.”

“Everybody fails the first time—I’m not ashamed to say I did,” he said, ashamedly.

“But still, would you really not describe President Trump’s actions on that call as a ‘shakedown?’ ” I asked. “He’s just finished talking about desperately needed military aid when he asks his Ukrainian counterpart to ‘do us a favour, though.’ ”

“Oh sure, it’s a shakedown,” Tony said, pulling a plate of ziti out from under his fedora and butting out his cigar in it. “But there’s a ‘shakedown’ and then there’s a ‘mob shakedown.’ You expect a certain level of class—of, how do you say it?—finesse,” he added, taking a break from running a numbers game in his desk drawer.

“So you don’t see any reason why people would make the comparison?” I asked.

“Oh, sure. I get why people would think that,” Tony grudgingly acknowledged, disposing of a body in his filing cabinet. “There’s even a couple good moments in there. I liked, ‘I wouldn’t say that it’s reciprocal necessarily because things are happening that are not good but the United States has been very, very good to Ukraine.’ ‘Reciprocal’ was nice. I might use that myself some time.”

“Listen, girlie,” Tony shook his head, “One good line does not a ‘mob shakedown’ make. I mean, a time and a place for these things. A good shakedown relies on three things. Location, location and nobody wearing a goddamn wire. There’s a transcript of this conversation. When you know the feds are listening in on your call, because you are literally the federal government of the United States of America, and you also know the government of Ukraine is listening to your call, because you are talking to the president of Ukraine…” Tony trailed off.

“Well, that sounds like a pretty bad location and a whole lotta wires to me! Not the time to be saying, ‘Hey, wanna do some high crimes? Maybe throw in a couple misdemeanours?’” said Tony.

“To be fair,” I said, “Trump probably expected White House staff and his pet attorney general to make sure it’d never get out. They did squirrel the electronic transcript away in a special system reserved for highly sensitive classified material. Let’’s call it the ‘e-East River.’”

“Fuhgetaboutit,” said Tony, shuffling his stack of Waste Management Consultant business cards and watching a strip show. “Even if you give this Donald mook that one, it’s still just amateur-hour stuff. This wasn’t Trump making this ‘President Zelensky’ guy an offer he couldn’t refuse, this was him leaving a prize horse’s head in his bed with a note saying, ‘I, Donald J. Trump, killed this horse and left its head in your bed because I wanted you to do some corruption for me. Also I like crime. CC: The D.A.”

“OK, so the initial shakedown wasn’t so hot, but how would you describe the effort to intimidate witnesses, co-conspirators and even law enforcement after the fact?” I asked.

“Well, all I have to say to that one,” Tony said, taking my laptop and doing his best to wrap a fish with it, “is they accidentally emailed their talking points to Nancy Pelosi! How did that play out? ‘OK, guys, it’s simple. We’re gonna break the U.S. Constitution over our knee, go overseas and get the help we need to win this election. But first, how do I send a mass email? Oops, do you think Nancy will give that back?’”

“Yeah, that was not smooth,” I said, delicately wiping the scales from my keyboard.

“Not smooth?” Tony “Crimedoer” McMobsterface sighed. “Did the Trump team pass up an ‘I just want to let everybody know that Luca Brasi sleeps with the fishes, by which I mean I killed him. I strangled him until he died and now he is dead’ press release as too subtle?” he concluded, while selling the paperweight on his desk an 8-ball.

“So, never really going to be part of the family, so to speak,” I said, taking a box of pastries from the bookshelf.

“Not a chance,” said Tony, and I thanked him for his time and got up to leave.

“Oh, before you go,” Tony called out to me, “if you see Mr. Trump, tell him, ‘Never rat on your friends and always keep your mouth shut and stop tweeting.’ ”

“And the mob comparison, you take affront to that?”

“A front, no, I’m a legitimate businessman,” he winked.