Scott Gilmore: The ranks of his official friends are thinning. Increasingly its Putin giving Trump what he really craves: validation and assurance. 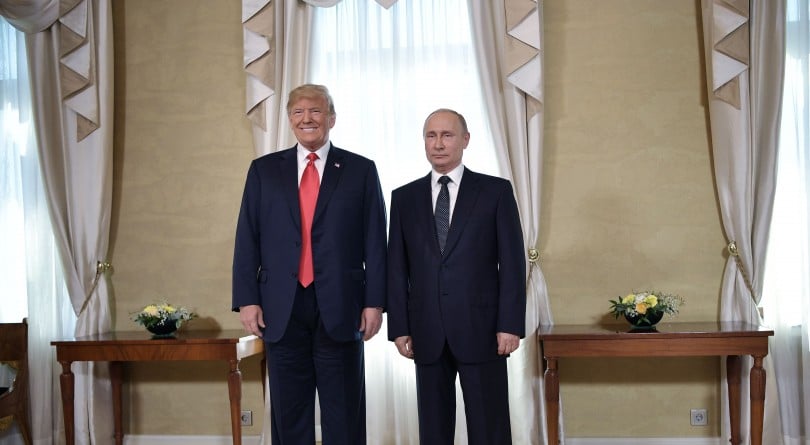 Every day Donald Trump has fewer defenders, enablers and advisors. The scandals, the incompetence, the high staff turnover and the growing stench of the Mueller investigation, have thinned the crowd that normally surrounds a president. But one confidant remains steadfast–Russian President Vladimir Putin. And as Trump becomes more isolated, this friend is only going to become more influential.

Power makes you popular. The more important you are, the longer the train of friends and admirers following behind. Of course, few of these people are genuine friends. They probably won’t be there when you’ve fallen a rung or two. But, while you are on top, for all practical purposes, they will reliably act like dear friends. They laugh at your jokes. They tell you what a great job you are doing. They agree when you complain. They are ready to help and willing to defend.

Trump’s list of friends is getting shorter. His base remains rock solid. The Mar-a-Lago crowd still lines up to offer praise and take selfies. But these people don’t count for a man like Donald Trump. As befitting a president, he requires friends that matter: senators, generals, news anchors and world leaders. These are the people who can defend Trump to the press, who could help pass his legislation, who will rein in bureaucrats, and most importantly who will reassure him in private and celebrate him in public.

For a while, Trump had many eager friends—even more than you might expect. Republicans who called him a “cancer” during the primaries, thanked him for his leadership after the inauguration. Generals jockeyed for postings in the White House. Presidents and prime ministers descended on the White House armed with charm and invitations.

But, one by one, these friends have become less visible and less voluble. Charlottesville forced a few to concede in public that the president had gone too far when he equated Nazis to protesters. After several train wreck summits and twitter attacks, western leaders are now much less eager to be seen with the man. As French President Emmanuelle Macron and Canadian Prime Minister Justin Trudeau learned, no amount of charm and bonhomie will protect you from tantrums and tariffs.

READ MORE: There is no precedent—a president sides with America’s enemies

The last two weeks, however, really cleared the decks. Trump headed to NATO armed with wild accusations about the allies owing money to the United States. Once there, he attacked Germany, and questioned whether the alliance was even useful. Leaders who once called Trump a “friend”, did not hesitate to criticize him in public. A senior official in Berlin even suggested Germany should now consider the United States as a potential adversary.

Trump continued to the United Kingdom, to meet another friend, Prime Minister Theresa May. As a conservative and a Brexiteer, she made the “special relationship” more personal. Trump has even been photographed more than once holding her hand. But then he inexplicably assailed her in the British press and praised her political enemies.

Last Friday, U.S. special counsel Robert Mueller announced indictments against 12 Russian military intelligence agents for attacking the American election. In Washington, the ranks of his official friends thinned some more as senior congressman and senators, realizing that the witch-hunt was finding witches, switched from defending the president to defending Mueller.

Trump went next to Helsinki, to meet a man previous presidents considered an archrival: Russian President Vladimir Putin. Trump’s enthusiasm for Putin goes back a long way. He may be the only person (including his own children) that the president has refused to ever criticize in public. In 2013 on his way to Moscow, Trump tweeted the question: “…will [Putin] become my new best friend?” Five years later, the answer is a clear “yes”.

In fact, they are such good friends that they opted to meet in private, without note takers or officials, an intimacy not shared with Trudeau, May or any other leader. We will never know what they talked about but we can safely guess it was very amiable.

Putin has carefully avoided ever criticizing Trump in public, not even after the U.S. tightened sanctions. It is likely he did the same thing in private and congratulated Trump on his leadership, his business acumen and his stable genius. Putin probably stoked Trump’s suspicions about NATO, and told him the alliance was only going to lead to war. There is no doubt Putin commiserated about the “Deep State”, fake news and Mueller, all out to thwart their friendship. And certainly, Putin reassured the president that he had won his election fair and square—there was no collusion: “You did all that on your own, Donald!”

Putin is now giving Trump something he is finding increasingly hard to find elsewhere: validation and assurance. In Washington the president’s intelligence agencies, generals, White House advisors, congressional leaders and even Fox anchors are edging away.

Putin is becoming Trump’s last best friend. It is no wonder Trump has already invited him to Washington. They will likely remain in regular contact between now and then. And, it is probable that the president’s trust in Putin will only go up as the number of allies around him goes down.

What will this mean for a president who is already badly detached from traditional American foreign policy? Trump’s positions will become even more radical. As Trump’s last best friend pulls him toward the Russian worldview, American criticism, especially from Republican ranks, will only push him farther into Putin’s reassuring embrace. In other words, it’s going to get much worse before it gets better.