Opinion: America's trade war with Canada could shift the Ontario election's narrative from the PC leader's weaknesses to his strength—economic competitiveness 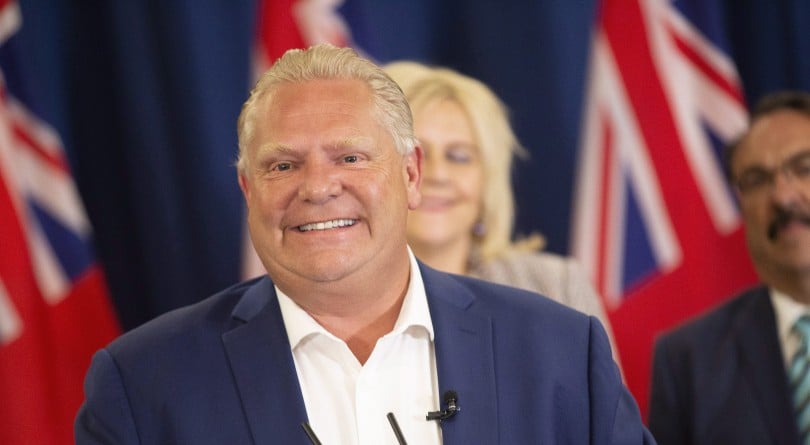 With a week to go in the Ontario election, Donald Trump has dropped an economic bomb. U.S. tariffs on Canadian steel and aluminum have arrived, and it looks like Canada and America are about to engage in a full-fledged trade war. Suddenly, there’s a new ballot question: who will keep Ontario safe from Donald Trump’s economic nationalism? And just like that, the campaign advantage shifts to…Doug Ford.

Would that be the same Doug Ford who in the past declared his “unwavering” support for Donald Trump, even after the now-President admitted to grabbing more p—y than your local veterinarian? Yep.

Would that be the same Doug Ford whose hardcore supporters nonce about in red “Make America Great Again” hats and shout “lock her up” in reference to Kathleen Wynne at rallies? Why, yes it is.

But won’t Ontarians want to punish a politician who is seen to be copacetic with the U.S. President in the wake of his comprehensively stupid decision to impose tariffs on Canada’s steel and aluminium industries under the (ridiculous) guise of “national security?” Yep.

Why, then, should voters place their trust in a man who, by all appearances, is an unrequited Trump-lover?

MACLEAN’S PROFILE: Are you ready for Premier Doug Ford?

Well, it’s not because Ford is an ideological soulmate capable of whispering sweet nothings into Trump’s ears. Justin Trudeau and his ministers, ambassadors, and functionaries have fluffed Trump proficiently—and to no end—but that hasn’t stopped the president from knee-capping his most important economic and political relationship.

Nor would a gut politician like Ford be able to apply a new form of logic to Trump’s closed mind. The problem with people like Trump who are wedded to illogical beliefs is they can’t be persuaded by logic. The President’s mercantilist view of economics is that everyone—including friendly Canada, no matter its leader—is working overtime to screw the mighty U. S. of A.

No, Trump’s tariffs on Canada are a win for Doug Ford because they potentially shift Ontario’s campaign narrative away from the PC leader’s weaknesses to an issue on which he is strong. No, Ford can’t make things better with the United States—but his asset is that he won’t make things worse at home.

If Trump is going to bugger the U.S., that’s his prerogative. But Ontario can’t afford to bugger itself in return, and the NDP program of higher spending and higher corporate taxes would do just that.

Not that it’s an easy sell. It certainly doesn’t help that much of the recent focus in the campaign has been on the significant new spending proposed by all parties, including the supposedly fiscally conservative PCs, who according to one study have the plan that will lead to the highest deficits of any provincial party.

But where Ford does have a clear edge over the NDP is on corporate tax and reducing red tape, two areas that will be key to Ontario’s future competitiveness in the Age of Trump. The new tariffs can be used to switch the narrative away from spending, where the PC leader had no advantage, and onto the broader issue of competitiveness, where Ford has lots.

The responses to Trump’s folly from the campaign trail show that Ford’s PC Party has quickly grasped this new competitiveness dynamic, while their primary rivals, Andrea Horwath and the Ontario NDP, have not.

“We must work domestically to make Ontario and Canada more competitive,” Ford tweeted in response to Trump’s action. “Our government will lower hydro rates, cut red tape, reduce taxes, and make Ontario the economic engine of Canada once again. Only a PC government will create the business-friendly environment that is needed to bring jobs back to Ontario.”

Horwath, meanwhile, committed herself to the path unsuccessfully travelled by the federal government: “As a life-long Hamiltonian, I know the impact President Trump’s protectionist actions will have on families who count on good steel jobs. If I am elected premier, I’ll be meeting with Canadian and American officials immediately to do everything I can to secure an exemption to these punitive, devastating tariffs.”

Voters should ask why Horwath expects to succeed where Trudeau and the entire diplomatic machinery of Canada, Mexico, and the EU have failed. An astute leader should by now realize it’s not about securing an exemption from Trump. Horwath’s naiveté is disconcerting.

Not that the NDP shows any signs of moderating their approach. “Who would you rather stand up for jobs in Ontario,” tweeted NDP adviser Brad Lavigne. “The Steeltown Scrapper @andreahorwath, or the unwavering Trump booster, Doug Ford?”

Forget that Donald Trump respects no woman, and would certainly not respect Horwath. Lavigne’s jab misses the target, but also the point, unless of course it’s the steel unions in Canada who have been propping up the Trump Organization through the recent global recession; the only way you can stand up to this President is to be a powerful dictatorship or to kick him in his family’s financial jewels. Canada, sadly, has no personal leverage over Trump.

And while it’s left to the federal government to levy its own tariffs in response, as Trudeau did yesterday, the provinces do have their own role to play. Job one: keep yourself as competitive as you can until the circumstances down south change.

This is where the NDP and its soak-the-rich socialism are vulnerable. Sure, Doug Ford has blown some bon mots Trump’s way, but he doesn’t want to take a bad situation and make it worse, which now—thanks to Trump—serves as a rather apt description of the NDP platform.