Andrew Leach: Under the Alberta UCP leader's plan, Trudeau would have a hard time approving the Trans Mountain project. In fact, so would Andrew Scheer. 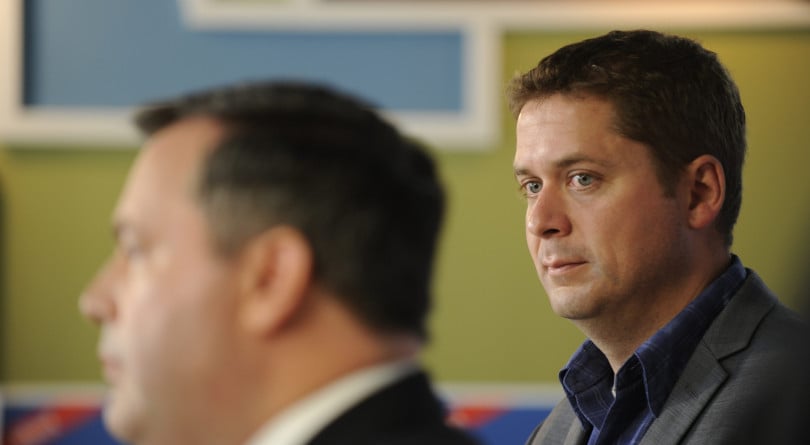 Scheer looks on as Kenney announces a campaign promise in Regina, on Saturday, Sept. 26, 2015. (THE CANADIAN PRESS/Mark Taylor)

Andrew Leach is an associate professor at the University of Alberta School of Business. In 2015, he chaired Alberta’s Climate Advisory Panel which recommended some of the policies now in place in Alberta.

In Alberta’s election, Jason Kenney is promising to build a new pipeline to the west coast and to roll back Alberta’s actions on climate change. He’ll likely have to choose just one of those two things. The path he’s on will likely force Prime Minister Justin Trudeau to reject the TransMountain pipeline. And, if that happens, is there hope that Andrew Scheer could still deliver a pipeline? Alberta might not like the answer.

In February, the National Energy Board issued its decision on the reconsideration of the Trans Mountain pipeline expansion. The federal cabinet is now in the midst of at least a 3 month review to decide to accept or reject the project. When he initially approved Trans Mountain, Trudeau was unequivocal: “we could not have approved this project without (…) Alberta’s Climate Leadership Plan—a plan that commits to pricing carbon and capping oilsands emissions at 100 megatonnes per year.”  He cited his government’s commitment to phasing out coal by 2030—a move that matched Alberta’s previously-announced policy—and stated that major pipelines could only get built if we had a price on carbon. Trudeau also referenced the relationship between Alberta’s climate plan and our national targets.

Is there any way Trudeau can approve the pipeline if Kenney moves ahead with his promises on emissions policies?  Not if he wants a shred of credibility on the climate change file.

READ MORE: Are we really okay with Jason Kenney?

Kenney has pledged a rollback of carbon pricing in Alberta, a lawsuit challenging federal authority to regulate provincial emissions, a removal of the oil sands emissions cap and a halt to the phase out of Alberta coal-fired electricity. That alone will make it very difficult for Trudeau to approve the pipeline.

Now imagine that Kenney, as premier of Alberta, is actively campaigning for Trudeau’s opponent in the upcoming federal election when Trudeau faces his decision. The prospects for the Trans Mountain pipeline get even more slim.

For Trudeau to approve the pipeline under these conditions would not only contradict his previous statements, he’d also likely be abandoning Canada’s Paris targets. There are many paths to meeting our national targets, but there is no credible path that includes a new pipeline and Alberta both reducing the stringency of its own policies and fighting the federal government’s means to impose policies nationally, as Kenney has pledged to do.

Canada’s 2018 Emissions Projections forecast emissions of 701 Mt by 2030, well-above our targets of 512Mt. That 701Mt includes 160Mt from Ontario, 275Mt from Alberta and 71Mt from Saskatchewan—506Mt combined from three provinces. Without more stringent policies in these provinces, and especially in Alberta, we won’t meet our targets.

It might be comforting for some to imagine that Kenney’s promised campaign against Trudeau will work and that, at worst, a Trudeau rejection of Trans Mountain would be a temporary setback. This isn’t just a Trudeau problem though; it will confront Andrew Scheer as well.

Scheer won’t be able to campaign on meeting our national emissions targets while supporting rollbacks of policies in Ontario (hello, Doug Ford) and Alberta: the math just doesn’t work. And, as David McLaughlin argued this week, there are a lot of votes up for grabs on climate change policies.

It seems unlikely that Scheer will run on the prospect of unregulated emissions from ever-expanding oil sands in areas of the country that care more about climate change than pipelines. It’s more likely he’ll campaign on a national version of Ford’s ‘polluters not commuters’ approach, and a promise akin to Stephen Harper’s earlier commitments to aim stringent federal policies at Alberta’s oil sands. Otherwise, any promises he makes on emissions reductions will not be credible.

If you’re counting on federal Conservatives to emerge as an ally on the pipeline file, you may also have forgotten that the Trans Mountain pipeline ends up on the west side of the Rockies and that there are a lot more seats in play federally in B.C. than in the oil patch. The last time the federal Conservatives were faced with a politically unpopular pipeline to B.C., Enbridge’s Northern Gateway, they did little to push it after 2012 or 2013, basically letting it die on the vine.

Sure, it was Trudeau who followed through on his promise to kill Northern Gateway on the same day he approved TransMountain in 2016, but the Conservatives had let it stall on their watch: it was under review or approved by a Conservative government for almost 2,000 days, with nary a shovel in the ground.

Kenney and many other conservatives have suggested there are things Trudeau could have done to get the process moving more quickly on Trans Mountain, perhaps circumventing the duty to adequately consult with First Nations and the objections of a B.C. premier opposed to the pipeline. One either has to believe that the magic wands they are asking Trudeau to wave to get Trans Mountain built don’t actually exist, or that Conservatives simply weren’t willing to wave them to get Northern Gateway built when they had the chance.

Either way, the news isn’t good for Alberta. Many Albertans will recall Conservatives’ tepid opposition to Christy Clark’s B.C. government breaking new ground by imposing her 5 conditions for support of a heavy oil pipeline through B.C. Whether Andrew Scheer would be willing to face a political cost that Harper wasn’t remains to be seen.

Maybe, instead, Scheer will find it easier to borrow a line from Kenney and state that, while getting Alberta oil to market is of strategic importance, “no particular project is a national priority.”

Of course, there’s still time for Kenney to change tack on these issues and to provide a path for federal leaders to approve this pipeline. Or he can hope that Line 3 and KXL relieve the oil sands pipeline constraints for a time.

There’s no question that Kenney wants a fight, and that he’ll gain politically in Alberta from fighting Ottawa over pipelines. The cost of losing that fight, however, might make engaging in it a literal no brainer.

CORRECTION, April 9, 2018: In an earlier version of this story, the forecast emissions for Alberta and Ontario were reversed.