Doug Ford and the art of the political flip-flop

Gabe De Roche: A flip-flop can sink a campaign. Or, as Doug Ford recently proved, it can also show that a politician is able to listen to the people. 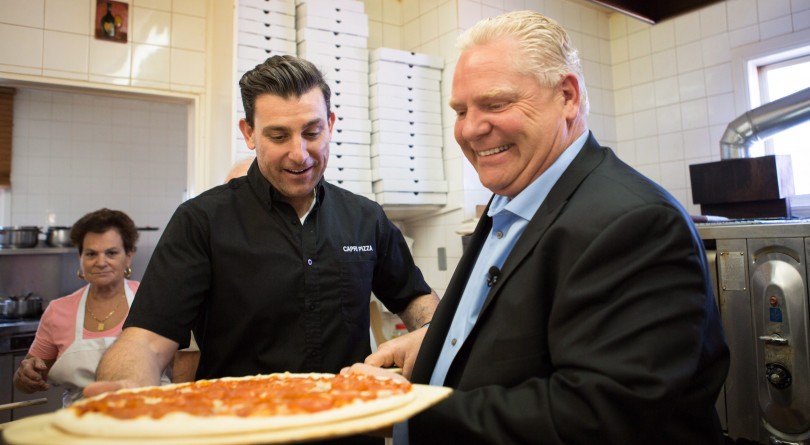 Ontario PC leader Doug Ford helps bake pizzas before an announcement at Capri Pizza during a campaign stop in Cambridge, Ont., on Thursday, May 17, 2018. (THE CANADIAN PRESS/Andrew Ryan)

Gabe De Roche is a former advisor to Liberal cabinet ministers. He is currently an account director and consultant on corporate reputation with Hill+Knowlton Strategies in Toronto. These views expressed in this article are the personal opinions of the author.

The flip-flop is a dangerous beast, oh so alluring to politicians facing negative headlines, but with a tendency to inflict sometimes irreparable damage to a campaign.

Hardly an election goes by without some kind of flip-flop. Social media’s increasing role in political communication has made instant fact-checking against a politician’s record a feature of modern campaigning. A politician has changed his or her mind. Perish the thought. Cue the outraged tweets.

While flip-flops may now be easier to identify—and the “humiliation” quicker to pile on—the phenomenon is not new or confined to any one particular democracy. Canada and the United States have “flip-flops;” the British have their “U-turns;” the Australians have their “backflips.”

The most infamous modern flip-flop may be John Kerry’s 2004 equivocation on his support for the Iraq War, which some say played a large role in sinking his campaign. The offending quote—“I actually voted for the $87 billion [military funding package] before I voted against it”— was ideal fodder for a devastating attack ad featuring the New England patrician windsurfing to and fro.

Here in Canada, politicians from all parties have flip-flopped—both during campaigns and after they were elected—with varying degrees of success: Stephen Harper flip-flopped on economic stimulus at the beginning of the 2008-2009 global recession; Jean Chrétien kept the GST he had campaigned against in the 1993 election; B.C. NDP leader Adrian Dix changed position on a pipeline during his failed 2013 election campaign; Justin Trudeau reversed his promise to replace our first-past-the-post electoral system, which had been a key promise in his successful 2015 campaign.

The current Ontario election campaign is no different. The first few weeks of Doug Ford’s campaign for premier have featured a litany of high-profile flip-flops, for good and for ill.

After embracing social conservative and outspoken homophobe Tanya Granic Allen—whom he had called “amazing” and a “friend”—Ford summarily fired her as a candidate on May 5, only two weeks after she had been nominated and in response to a video in which she said the spread of same-sex marriage made her “almost vomit in disbelief.”

He fired her for expressing her anti-gay views in an “irresponsible” way, according to a statement from Ford. But while he may have flipped on Granic Allen’s status as a PC candidate, he hasn’t flopped on her pet issue—repealing a modernized sex-ed curriculum, which Ford maintains he will do.

Then, in the space of one day, Ford and his campaign seem to have flipped their position on safe injection sites before flopping back to their original position only a few hours later. Originally against safe injection sites, a Ford spokesperson told a media outlet on May 7 that he would first consult with experts before shutting them down. And then later that night at the first campaign debate, Ford once again promised that he “would not have safe injection sites in neighbourhoods.”

But Ford’s most prominent flip-flop came on the issue of selling off portions of Ontario’s Greenbelt—an area of protected land closed to development outside Toronto and its surrounding suburbs. With much fanfare, the Liberals released a secret video recording of Doug Ford addressing a closed-door meeting of developers in which he committed to opening up “a big chunk” of the greenbelt for new housing construction so that more supply could drive down the cost of buying a home. “That’s my plan for affordable housing,” Ford said.

When confronted by media, Ford later promised to replace any areas he opened to development with new Greenbelt-protected land.

Faced with a barrage of negative headlines and an outcry from pro-Greenbelt residents in the 905 suburbs—a battleground area this election where all parties are fighting to win a spate of newly created ridings—Ford flip-flopped, saying:

He released the video statement on Twitter, speaking as if in an interview, into a “Ford Nation Live” microphone—the online news channel created by his campaign.

Just like that, the flip-flop was complete. And Ford seems to have weathered the storm.

On a radio call-in show I appeared on the day after the flip-flop, caller after caller expressed anger at his initial Greenbelt sell-off proposal but admiration for his willingness to “listen to the people.” Apart from the obvious critics who wondered what else Ford might be saying behind closed doors, the controversy and the ensuing flip-flop gave Ford the opportunity to put his “For the People” campaign slogan into action.

If the feedback from those listeners was any indication, the flip-flop felt authentic. Ford clearly had built up enough equity in his “For the People” brand that his reversal felt credible and even admirable to many voters willing to give the benefit of the doubt to a politician who said he had legitimately changed his mind. After all, who hasn’t?

It’s easy to be cynical about how politicians talk to voters during election campaigns—especially populists caught on secret video recordings in closed-door meetings—and often the cynics are right. But Ford’s reversal on the Greenbelt may go down as a master class in the art of the political flip-flop.

And the lesson to other politicians is this: It’s okay to change your mind. Sometimes you need to change your mind. And when you do, you owe voters an explanation—not about the intricacies of new data that has suddenly come to light or how your position has been confusingly consistent all along, but about how your change of heart is true to your values.