Tabatha Southey: Doug Ford didn't appoint a Minister of Whining About Not Being Able to Buy Beer at the Corner Store, but does it really matter? 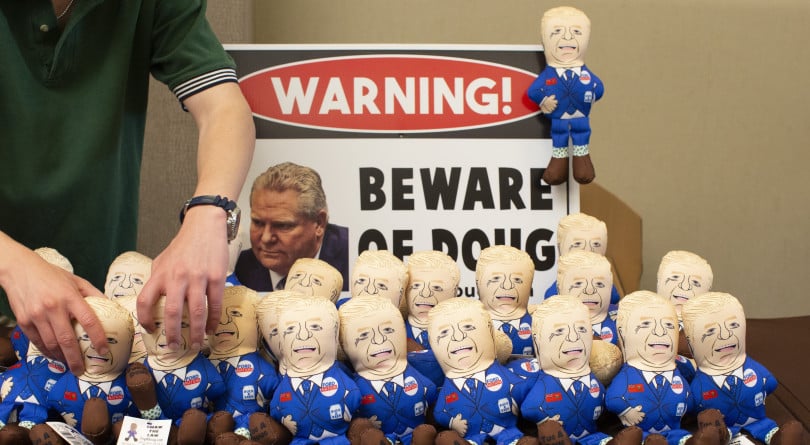 On Thursday morning, in the wake of a series of polls so disastrous filmmaker Roland Emmerich has already optioned them and ordered a treatment, Ontario Premier Doug Ford shuffled his cabinet. A year into his Progressive Conservative government’s mandate, Mr. Ford has found himself devastatingly unpopular. In much the same way that a man who spends years preparing his mind and body, and then books and boards a flight, might find himself very high up in the Himalayas.

Doug Ford has put effort and much of his short time in office into becoming this unbeloved. Having run a virtually platformless campaign during which he promised that “Under our government, not a single person will lose their job,” conveniently misremembered  last week to “I’ll stick with my quote—No front-line person will lose a job,” the premier turned out to have plenty of wildly unpopular ideas that he clearly knew wouldn’t have got him elected tucked up his sleaze.

I actually will stick with my quote, my quote from the get-go: make no mistake, if Doug Ford does not use it, need it or understand it, it will go, and the scope of this is staggering.

The premier’s April 11 budget cut the Ontario Library Services budget in half. It slashed programs that helped students fund their post-secondary education and made massive cuts to legal aid as well. The budget pulled the funding for a program administered by Forests Ontario that aims to increase the province’s vital forest coverage by working with landowners to get more trees—50 million more trees—on private lands. The federal government has stepped in to save the planting program and the many, very front-line, jobs it generated.

The budget made so many previously undiscussed cuts, including cuts to education that have already seen hundreds of teachers laid off as the province shifts towards larger class sizes and, for some courses which I suspect will be joined by more courses, no classes at all, just mandatory e-learning. It was Doug Ford’s Stuff I’m Very Passionate About But Didn’t Want to Share With You Until I Was Already Premier Budget, and it went over like a lead balloon that thinks Ontarians were really looking to stick it to autistic children.

Long-time Doug Ford watchers already understood his pledge to mean, “No person whose job I personally consider valuable to people like me will lose their job,” but many in Ontario have been taken by surprise and the premier has found himself repeatedly and loudly booed at public events.

It takes a certain kind of man to sour the mood at a sports team’s first championship victory celebration in their entire 24-year history, and Ontario elected that man premier.

This week’s cabinet shuffle has been expected for a while now. Sometimes you just have to pick up all the deck chairs sliding around on the Titanic and throw them overboard. Yes, just throw those chairs right at the iceberg. Make those wooden chairs post selfies of themselves as they go.

Ford’s unpopularity is said to be hurting the federal Conservatives’ chances so much that Andrew Scheer seems to have benched the Ontario government. The provincial House has been adjourned until after the next federal election. Queen’s Park will sit empty until Oct. 28 which, given the OPC’s apparent priorities, leads me to believe they need that time to replace MPPs’ desks with beer fridges and cash registers, a lotto machine and a big poster advertising vapes—but let’s get distracted by the big cabinet shuffle. That, after all, is what it’s for.

I don’t care if they triple the size of cabinet if that’s what it takes to fill the vital position of Minister of Picking Weird Internet Fights with Kiefer Sutherland. The demands of that position might prove to be so onerous that we might need to split the position and add a Minister of Getting Spectacularly Owned After Dragging a Bus Shelter Into Weird Internet Fights With Kiefer Sutherland to the cabinet. This portfolio might also involve randomly enlisting other people’s granddads to endorse your government’s dubious-to-the-point-of-being-immoral actions from beyond the grave.

Word is, Doug Ford wanted a Minister of People Not Booing Me and would then likely have added a Minister of Hey, They’re Still Booing Me, Maybe Another Minister Will Make Them Stop Booing Me at some point down the line. The notion of a Minister of Custom Van Procurement for DOUG-IEEEEE! was allegedly also floated. As well as a Minister of Mandatory Gas Pump Stickering. Not to be mistaken for Ontario’s public health units, which are, according to Mr. Ford, those “folks that go … into restaurants and put the little stickers on saying its safe to eat here” and should therefore just suck up some huge cutbacks.

Doug Ford knows what everyday folks in Ontario want, and apparently that’s for every meal out to be a real surprise.

A Minister of Ha! I Bet You Wished You’d Elected Me Mayor Now was also on the table, because sometimes a man just needs a lot of ministers to fill the void where people who think autistic children shouldn’t be allowed to go outside keep their souls.

As it turns out, the premier settled for a less bold reordering of his cabinet, but that doesn’t mean he did not make some standout choices. Doug Ford knows that students are worried that cuts to grants and loans and an ongoing effort to dismantle student services are a sign his government might not be a big fan of higher education. The right man for Minister of Training, Colleges and Universities in these circumstances is Ross Romano.

Romano, if you haven’t heard of him, is a man of vision, one very specific vision,  a vision of comparing cancer patients asking for medicine to help them not die to small children demanding ice cream with himself as the “adult in the room” telling said cancer patients, “Sorry. You can’t have everything. You just can’t.”

It’s time to choose between your rent and your packaged ramen, young scholars.

Lisa MacLeod, who missed her calling as Minister of Telling Small Children Exactly What You Really Think of Their Macaroni Art, has instead been made minister of tourism, culture and sport. One assumes that she will suggest that there is no need to actually visit Ontario, play sports, or organize cultural events as long as you have an iPad.

Todd Smith, often mentioned as one of the Conservatives’ strongest communicators, will take over Ms. MacLeod’s roll as social services minister. The idea apparently being that families working to raise autistic children will be ready to accept being hung out to dry by their government if you throw in a really tight powerpoint.

A fair bit of experience or at least education that one likes to hope may have occasionally led to some pushback behind closed doors has been disappeared to make way for new faces. There are a total of seven new faces in cabinet and yet Sam Oosterhoff, who would have been a natural fit for Minister for What Is Libraries? And Mature Book Clubber Response, is nowhere to be found on the roster.

Vic Fedeli, who will go down in history as a one-budget minister of finance, has been very much downgraded to Economic Development. Doug Downey is the new attorney general, replacing Caroline Mulroney, who has been plonked down, way down, into the transportation portfolio. Her associate minister, party to all she does there, will be Kinga Surma, a close friend of Doug Ford and a first-term Etobicoke Centre MPP. Ms. Mulroney succeeds Jeff Yurek in this position and he’ll go to Rod Phillips’s old spot at environment, because Phillips is the new finance minister and you don’t need to remember any of this because it changes absolutely nothing.

Although, if you enjoy this process and are looking to inspire further futile cabinet shuffling, the only question you need ask is, “OK, so where are we booing Doug Ford today?”