Doug Ford, Jason Kenney and the end of the world

Stephen Maher: Only fools, cranks or politicians can ignore the scientific consensus around global warming and the urgent need to address it 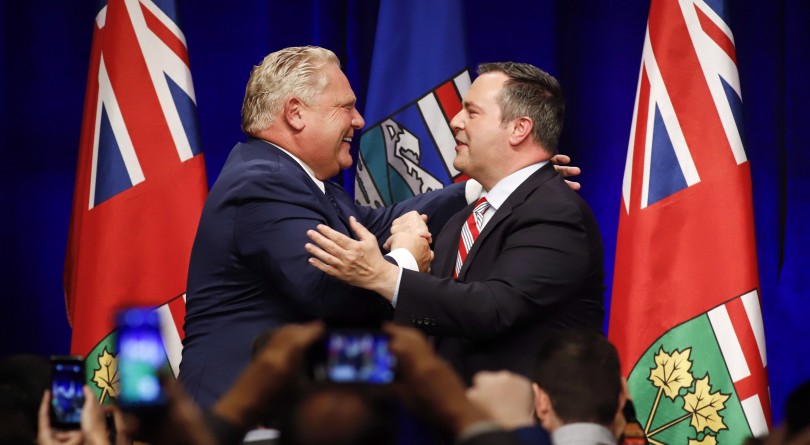 It was a typically partisan show, with both men deploring their foes and leaving no cliche unturned in urging supporters to anticipate the sweet victory ahead when Notley and Trudeau are sent packing.

Good for them, I would normally say, turning quickly to some other, more interesting news—like the looming showdown in the Legislative Assembly of New Brunswick—except that the main point of the Kenney-Ford event was to rally Albertans against the hated carbon tax, which Kenney, Ford and most Canadian conservatives are portraying as the greatest threat to our way of life since Justin’s father shoved the metric system down our throats.

This is a deeply discouraging development if you are interested in the continued existence of life on this planet.

This week, the UN’s Intergovernmental Panel on Climate Change issued a report — the work of thousands of scientists—warning that the planet will face enormous and catastrophic changes—floods, fires, crop failures, the destruction of coral reefs, ocean acidification—unless we cut emissions to keep the global temperature from increasing more than 1.5 C.

“It’s a line in the sand and what it says to our species is that this is the moment and we must act now,” said one of the authors, Debra Roberts. “This is the largest clarion bell from the science community and I hope it mobilizes people and dents the mood of complacency.”

Cutting emissions won’t be easy but not cutting them will cost us a lot more, in the not-too distant future. Consider how much hurricanes cost. Harvey, which soaked Texas last year, cost $125 billion. Maria, which killed thousands in Puerto Rico, cost $90 billion. This summer’s wildfires in British Columbia—the worst on record—cost $350 million to fight, and goodness knows how much in lost forestry revenue.

Only fools, cranks or politicians can ignore the overwhelming scientific consensus on this, which brings us back to Canada’s conservatives.

If they are successful, and get rid of Justin Trudeau’s government next year, the Tories will do what the Australian conservatives did when Tony Abbott beat Kevin Rudd and killed that country’s carbon tax.

Conservative leader Andrew Scheer has made opposing the carbon tax the centrepiece of his leadership, although he is promising to reveal his own climate plan soon. If it resembles Stephen Harper’s plans, it will be have a lot of optimistic nonsense about miraculous emission cuts to be achieved after consultations with industry that will always and forever remain just around the next bend.

Conservatives aren’t serious about cutting emissions because their voters don’t think it is important or desirable. Recent polling from EKOS shows that the environment is the most important issue to only seven per cent of CPC supporters, dramatically lower than the number for supporters of other parties. 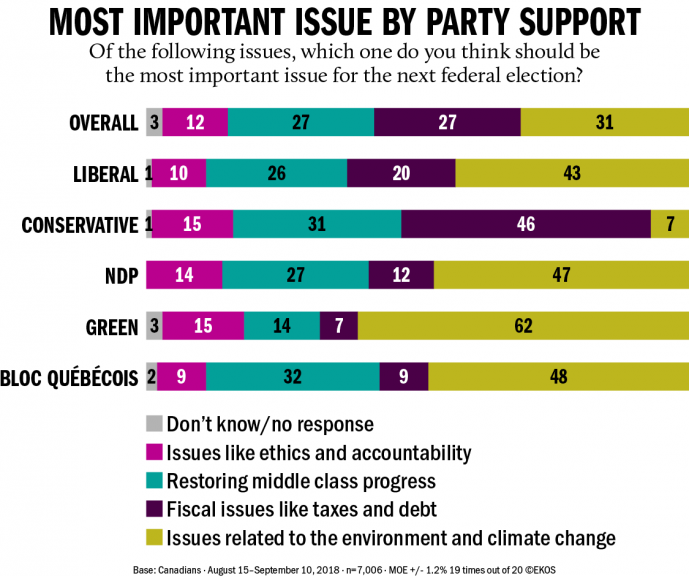 In the Conservative leadership race last year, Michael Chong came fifth with a pro-carbon tax campaign. In the recent Ontario PC leadership race, Ford pushed other candidates away from a carbon tax, even though opposing one blew open a hole in the party’s fiscal plans.

In his rally last week, Kenney went on at length about the unfairness of taxing carbon, pointing out that people need to heat their homes and fill their gas tanks.

“I’m sorry, these things are not vices to be punished by politicians,” he said. “This is what we call normal life, and it should never be punished by big government.”

Conservative politicians are telling people that the rascals in power are trying to pick their pockets, asking them to pay an unfair price. That’s good politics, except that it is in conflict with the facts, which are clear and do not make allowances for the tender feelings of the snowflakes who refuse to accept that we are going to have to change the way we do things. We have to cut emissions or we will destroy the planet. The facts don’t care about your feelings.

The way things look right now, it is not clear that we will manage to do it. The world is addicted to cheap power, which means coal. Donald Trump wants to burn more of it. China and India keep building new plants. Brazil looks set to elect a guy who wants to withdraw from the Paris climate accord.

It’s all so stupid, because it’s clear that the price of not changing our ways will be much higher than changing them—$54 trillion, if you believe the scientists who wrote the IPCC report, which you should.

Since 1988, when NASA scientist James Hansen published the first model that showed human emissions were changing the climate, the world’s scientists have put enormous resources into understanding what is happening.

What they have not done is convince the public to believe them and vote for action. It’s no exaggeration to say that everything we care about depends on doing that.