Matt Gurney: The Ontario premier is parking his government until the fall. Whatever the reason, it's very good news for the federal Conservatives. 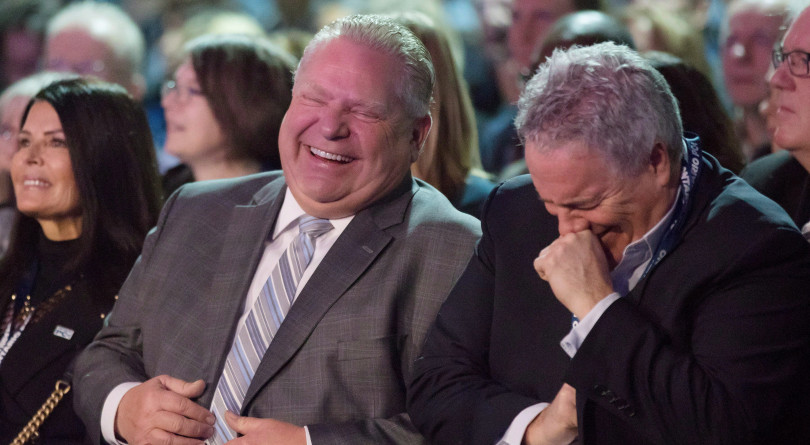 Ford and his chief of staff Dean French share a joke as they wait to hear Scheer speak at the Ontario PC Convention in Toronto on Nov. 17, 2018. (Chris Young/CP)

Sometimes, even a negative answer reveals a lot. I mean, if people are even asking the question…

That’s how I felt last week when I saw the Globe and Mail had asked the federal Conservatives if they had any involvement in the extra-long summer break announced by Premier Doug Ford. The Ontario legislature, rather than returning from its summer recess sometime after Labour Day, will instead only reconvene in late October. The timing is not only notable for it being a break with routine, but because it means the Ontario Legislature will next sit after the upcoming federal election.

The Globe’s Laura Stone apparently had the same instant reaction I had—did Andrew Scheer’s team lean on Ford’s, using whatever mixture of carrot and stick proved necessary, to convince the premier to just kind of … well, go away for a few months?

No, said the Conservatives. “Nobody in the Office of the Leader of the Official Opposition was in touch with Premier Ford’s office about his decision to adjourn the Legislature,” the Globe quoted one of Scheer’s spokesmen as saying.

I’m cynical enough to note with interest the careful phrasing. There’s an awful lot of people Andrew Scheer could call on to act as an emissary to Ford’s team who aren’t on staff with the opposition leader’s office. Still, for the sake of argument, let’s take the statement at face value. Whatever the reason for Ford’s decision, if you’re Scheer, it’s probably a damn good thing.

The federal Conservatives are in a very good position heading into the summer. The Liberals are by no means out of the fight. Not even close. But the brutal winter and spring has done real damage to the Liberals and Prime Minister Justin Trudeau specifically. Most polls show the Conservatives with a real lead—not a massive one yet, but meaningful. The latest update from 338Canada gives the Conservatives a better-than-even chance of winning the most seats in the fall, with roughly a one-in-four shot at a majority. Talk to any federal Conservative and you’ll hear some variation on the same theme: they did not expect to be so well positioned in the summer before the vote arrives.

There is one bit of not-so-awesome news for Scheer, though: Ontario. Looking again at 338Canada’s model, the Conservatives look set to do well in B.C., decisively break the Liberal stranglehold on the Atlantic, hold or maybe even slightly improve in Quebec, and do their usual near-sweep of the Prairies and Alberta. In Ontario, too, they’d improve—338Canada has them taking 50 seats or so, a big improvement over their current 33. But it’s not good enough, with the model showing the Liberals winning roughly the same number while remaining strong in Quebec. (Maybe ominously, if you’re a Conservative, a Mainstreet/338 poll last week showed the Liberals leading in Jane Philpott’s Markham-Stouffville riding.)

This all would leave the Conservatives about 20 seats shy of a majority—and if you’re going to make up 20 seats nationally, Ontario is the best place to do it.

But Ontario has a conservative premier. And he’s not popular.

A volley of polls in recent days tell the tale. Angus Reid reported on Friday that Ford was the second-least popular premier in the country, with only a 36 per cent approval rating. Ipsos reported late last month that all three major Ontario parties are in a statistical tie—32 per cent for the Liberals, 30 for the PCs and 29 for the NDP. Also late last month, Mainstreet Research reported Ford had a net -53 approve-disapprove with Ontario voters.

This is a pretty rough showing for a man and party that won a majority government only one year ago last week. Ford’s government has faced sustained pushback over a series of initiatives: the decision to shrink Toronto’s city council, changes to provincial autism therapy programs, budget cuts to education and public health budgets. Many of those positions have been softened or abandoned, but the controversies—and that was not a complete list—seem to have taken a cumulative toll.

It’s perhaps enough to explain the long break at the legislature—it gives the PCs a chance to adjust after the tumult of their first period in office in 15 years. But the timing, even if it wasn’t co-ordinated, is also to Scheer’s advantage. Ford’s troubles are becoming his.

The Toronto Star reported Thursday that a survey found Ford’s unpopularity was leaving more than half the electorate less likely to vote for Scheer. With only limited places where the Tories can make up enough seats to turn their current generally favourable polling into a secure majority, that’s a big problem.

Recessing the legislature not only frees up Ontario PC staff and volunteers to work on the federal campaign, it also will partially put the Ontario government out of sight and, just maybe, out of mind. Jason Kenney, safely in place in Alberta with a rock-solid super-majority approval rating, can be Trudeau’s provincial foil in the coming campaign. Ford can enjoy his cottage and focus on getting his government refocused for the years ahead.

It all may prove unnecessary, of course. If the Tories end up hitting the high side of the polls’ margins of error, they could easily win. There’s certainly a sense of optimism among their ranks that wasn’t there 12 months ago. But Ontario is a problem for Scheer. Everyone knows it. A long break at Queen’s Park doesn’t solve it, per se. But it’ll probably help.