Tabatha Southey: Ontario's premier has hired a close family friend to run the OPP and doled out millions to a big client of Deco Labels. We sense a trend. 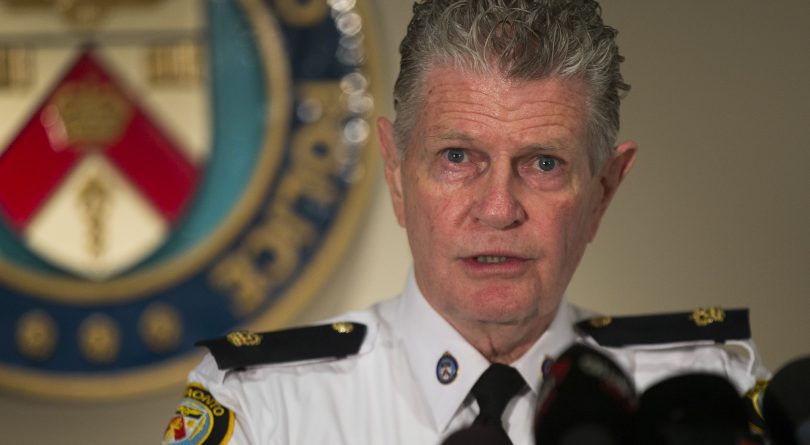 TORONTO, ON - FEBRUARY 19: Superintendent Ron Taverner updated the media on the investigation into murder of 15-year-old Jarvis Montaque at 23 Division. Montaque was shot by a single bullet on February 17. Feb. 19, 2013 BERNARD WEIL/TORONTO STAR (Bernard Weil/Toronto Star via Getty Images)

The appointment of close Ford family friend Ron Taverner to the top position in the Ontario Provincial Police didn’t exactly leave anyone who follows Toronto politics reeling. The process by which Taverner was selected looks as shady as a crooked three-dollar bill tucked under an oak tree in the Greenbelt that Doug Ford absolutely promised he was not going to open up for development, and how’s that going?

But Ontario, after all, elected Doug Ford, a one-term city councilor who Toronto’s integrity commissioner found had broken city council’s code of conduct by using his influence as a councillor to benefit two companies, both of which had long-standing business relationships with Deco Labels. Deco is—wait for it—owned by the Ford family. Taverner is to start the job on Dec. 17, it might as well have a bow on it, and this is the kind of familial shenanigans, and now drama, the province signed up for.

Nepotism is nothing new, of course, but Taverner’s appointment feels very much on trend. In general there is a politics afoot just now that doesn’t even attempt to make the argument that, “Trust me, this is the right thing to do,” relying more on a kind of bilateral knavery. This is politics with a shrug, and an “Oh, come on, you’d do the same too if you had the chance,” and so forget ethics, even optics are irrelevant.

READ MORE: Ontarians, we’re all living in a Dukes of Hazzard show now

Who is to say why $34.5 million in provincial funds was doled out to Maple Leaf Foods in aid of a new $660-million poultry-processing plant in London, Ont., in late November? Yes, that would be the same Maple Leaf Foods that has long been a client of none other than Deco Labels, and it is “the largest investment in food processing ever in Canada,” as Ford himself said.

None of which is to say the allocation of funds is necessarily untoward or a bad idea. The federal government ponied up $20 million as well, but the question, “Which came first, the chicken processing plant or the label on the chicken?” does come to mind.

On Tuesday acting OPP commissioner Brad Blair, who has hired a lawyer and seems to mean business, requested that Ontario ombudsman Paul Dubé investigate Taverner’s hiring, which Ford insists he had nothing to do with and we are asked to believe was the the perfectly correct outcome of some kind of tea party, a three-person panel that included Taverner’s and his former boss.

Officers within the OPP have raised concerns that the process that appointed the new head was improper and that this might undermine the integrity on the force. “If the hiring process remains enveloped in questions of political interference” wrote Blair, “the result will be irreparable damage to police independence…”

Taverner has never held a high-ranking position within the OPP or headed a police force, and it seems there may be members of the OPP who are apprehensive about the appearance, real or illusory, that the premier of the province has acquired a set of handy pocket police.

RELATED: Why Doug Ford and Jason Kenney are treating the media as enemies

Blair also alleges that Dean French, Ford’s chief of staff, asked that police buy “a large camper-type vehicle” and customize it for the premier to tool around in, and that the cost of the camper be “kept off the books.”

Many, understandably, look forward to the Progressive Conservative Party of Ontario’s  “If the Van’s a Rockin’ Don’t Come a Knockin’ ” 2022 campaign.

The Toronto Sun‘s Joe Warmington blustered in a column, “Some OPP officers are reaching out to offer support for Taverner, a 50-year member of the Toronto Police. ‘I told the premier today the reason they don’t want Taverner there is because he will change the fiefdom that is already in place,’ said an officer.”

Another officer was “dumbfounded” about the controversy since as a rank-and-file officer he “heard nothing but good things about Taverner.” To hear Warmington tell it, no one should even bother calling the OPP just now. They’re just too busy non-stop baking cakes for the man who will rise several ranks from his position of friendly local police commander in Ford’s Etobicoke neighbourhood to be head of a police force second in size to only the RCMP, and their new boss.

They’re working on a musical number for the Baroness.

Curiously, an earlier version of the column quoted none other than, we’re assured, the entirely independent Taverner himself, defending the vehicle purchase—the details of which he seemed peculiarly familiar with. “ ‘I am told it’s not a camper van but an extended-size van,’ Taverner told the Sun,” the article read, for a time. “He’s a big guy and it would have more room for he and his team to work while on the road.”

A somewhat later version of the column, which the Sun noted was edited at 6:59 p.m. the day it was posted, ever so discreetly removes this, potentially damaging to the soon-to-be commissioner, bit of quotation. This particular defence is left up to a mere “staffer” quoted as saying pretty much what the vanished Taverner had said. “He’s on the road for hours at a time and as a big guy was looking for some more room to be able to meet with his staff or be able to change his shirt in privacy before going into a venue.”

It appears that the selected head of the OPP was swapped out for a “staffer.” Or is it six of one, half a dozen of the other these days? Will Ford next announce that the hiring process in the future will be streamlined so that all key positions in the province will be filled by “Some buddies of mine, why you gotta be so nosy?”

Will the qualifications for all positions be lowered to better accommodate Ford’s affections?

Will anyone care as long as those “Open For Business” signs Ford had put up remain along Ontario’s border as part of the Ford government’s apparent mission to rebrand the province as “Ontario, the outlet mall of provinces”?

I think we have the answer to the question “How bad can a Doug Ford government be?” And it’s “How much time do you have?”