Matt Gurney: The Green leader could win over disaffected voters on the left and right. Why is she ruling out working with Andrew Scheer? 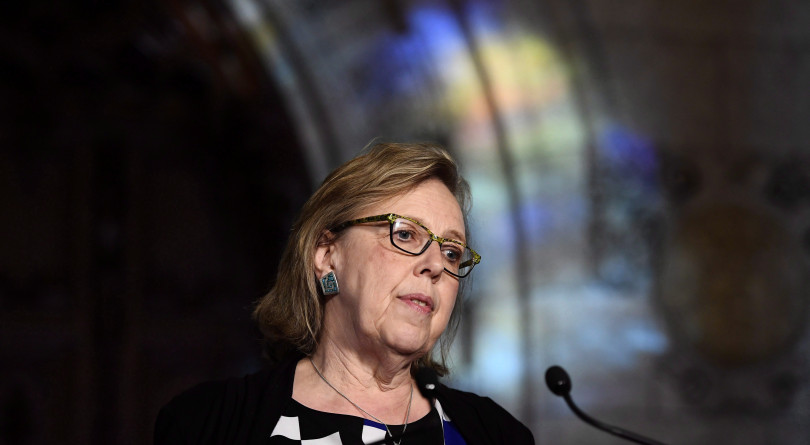 May speaks to reporters about the government's plan to buy the Trans Mountain pipeline, on Parliament Hill on May 29, 2018. (THE CANADIAN PRESS/Justin Tang)

Why does Elizabeth May want to fritter away what genuinely seems to be some real momentum heading into this fall’s federal election?

Momentum is a relative term. The country isn’t exactly being swept by May-mania. But the Greens do seem to be experiencing one of their periodic pre-election blossomings. Opinion polls have shown their popular support edging up beyond the usual mid-single-digit level. The 338Canada vote projection has them just shy of 10 per cent support nationally—the highest they’ve been since the last election.

There are other signs of momentum, such as they are: a good showing in P.E.I.’s recent provincial election, the election of a second Green MP in a by-election earlier this month, the election of the first Green MPP in Ontario last year. These are modest signals, but enough to notice.

So why hasn’t May noticed? Or, at least, why isn’t she acting like she has? This could be the party’s moment to build something important, more than just a left-wing curiosity. She needs to act like it.

In a recent interview with HuffPost Canada’s Althia Raj, May was asked about the possibility of the next election ending with no party in a majority position. Raj asked May if the Liberals, even if they’re behind the Tories in seats, should try to form a coalition with the Greens and/or NDP. May answered yes, absolutely, and noted, rightly, that that’s the way the system works.

READ MORE: Why you just may vote Green this time

Even if the Conservatives win more seats than the Liberals, if they fall short of a majority, the Liberals, as incumbents, would typically get the first crack at assembling a coalition (or some other arrangement).

May is simply stating the obvious there. But later in the interview, as Raj continued to explore how May would respond to hypothetical election outcomes, though the Green leader refused to commit to any specific Green party conditions for co-operation, she did say that Andrew Scheer should not be Prime Minister. His position on climate change, May said, left him “unfit to govern.”

I don’t doubt there’s a lot of people who feel the same way. (Though, as I’ve written here before, I’m not convinced it’s as many as May might like.) That being said, May could very easily be in a position of real influence soon. Does it really make sense to be ruling out one of the people you might be negotiating with to form a government in a few months?

It’s especially bizarre because, as noted above, May is not blind to the problem of committing too early to any particular set of demands. She’s obviously thinking ahead to the next election, and the possibility of a hung parliament. She has every right in the world to disagree with Scheer on climate change, and say so.

But the issue is not as simple, as May told Raj, as talking with the other leaders to determine who has the most in common. The voters are going to have a say in this, too. Consider a hypothetical: assume that the Greens continue to do well, and again looking at the 338 model, capture 6 or more seats. Let’s assume further that the Conservatives fall short of a minority but only by a seat or two.

Why shouldn’t May leave herself the option of working with Scheer? Not committing to doing so, but at least staying open to it. Lord only knows what she could wring out of the Conservatives if they truly were only a small number of seats shy of a government and the Greens had enough seats to put them over the top, leaving the Liberals and NDP on the outs.

It’s an especially interesting question because, assuming a 6-person Green caucus, we’d have ourselves a novel situation. Elizabeth May has always been either the totality of the federal Green caucus or, during brief periods where she’d had a colleague in the House, the more important half of it. If the party has a strong showing in the fall, that’s obviously good news for her, but that will mean she’s managing a group of duly elected officials for the first time. It’s entirely possible that some of those members could well have different answers when asked which party they have the most in common with.

Because the best argument I’ve ever heard the Greens make for their own party is that they aren’t simply another centre-left party, a different shade of progressive, condemned to battle the entrenched Liberal and NDP voter bases for every last ballot in a zero-sum game.

Obviously, yes, that’s how it generally has worked out in practice, and certainly during May’s tenure as leader. But the Greens can (and have, at different points in their history) offer themselves up as something a little more complicated than that—a blend of market-oriented principles and social and environmental sustainability that could draw disaffected voters from the right as easily as the left.

That’s not what we have with the Greens under May, and it might be unrealistic to imagine us getting there any time soon. And, hey, credit where it’s due: the party is doing well, and that’s a credit to her leadership.

But if the Greens are going to sustain their current popularity and become a meaningful factor in federal politics, they’re going to need a leader willing to work with any leader that can garner the support of a large part of the electorate. May could be about to get her first real taste of power—let’s hope for her sake she hasn’t been an also-ran for so long she doesn’t know what to do with it.