'Every day, we wish she were still with us'

Patricia Treble: On what would have been Diana's 60th birthday, Prince William and Prince Harry unveiled a new statue, keeping the focus on their mother 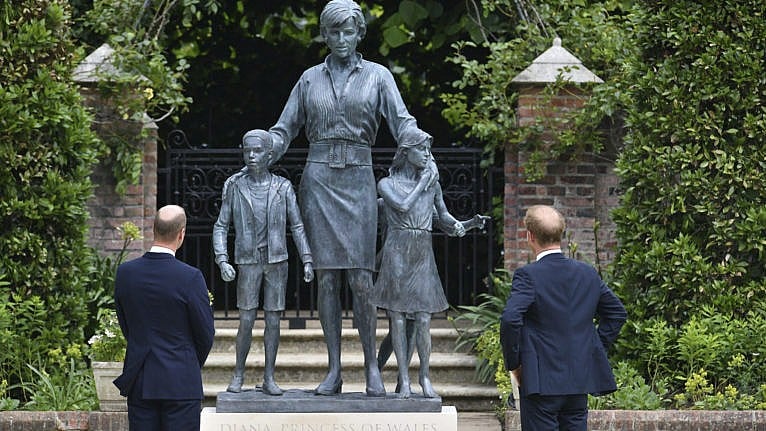 Britain's Prince William, left and Prince Harry unveil a statue they commissioned of their mother Princess Diana, on what woud have been her 60th birthday, in the Sunken Garden at Kensington Palace, London, Thursday July 1, 2021. (Dominic Lipinski /Pool Photo via AP)

Diana, Princess of Wales, would have been 60 today. Surely, she would have celebrated her birthday with her family, especially her two sons, their wives and five young grandchildren. For many years, the Diana anniversary most noted was that of her death on Aug. 31, 1997, in that tunnel in Paris. For decades, judges, experts and charlatans alike have dissected every moment leading up to that car crash, and every sorrowful event afterward.

Now, her adored sons, William and Harry, are reclaiming their memories of their mother and presenting them to the world in the form of a statue at her last home of Kensington Palace. “Our mother touched so many lives,” they said when announcing the project in January 2017. “We hope the statue will help all those who visit Kensington Palace to reflect on her life and her legacy.”

The bronze figure of Diana is surrounded by three children “who represent the universality and generational impact of the princess’s work,” the official press release states. She’s dressed in a simple blouse and belted skirt, which is based on the final years of her life “as she gained confidence in her role as an ambassador for humanitarian causes”and “aims to convey her character and compassion.”

In front of the statue is a stone engraved with an extract of the poem, The Measure of A Man:

These are the units to measure the worth

Of this woman as a woman regardless of birth.

Not what was her station?

But had she a heart?

How did she play her God-given part?

RELATED: Princess Diana’s legacy is more urgent than ever

Her statue takes pride of place in one of Diana’s favourite spots, the historic sunken garden of Kensington Palace. For the unveiling, the planting scheme was redesigned and simplified, using many of her favourite spring and summer pastel blooms, including forget-me-nots, so as to create a calm, peaceful setting. This is the first permanent statue of Diana and a far cry from the three other public memorials to her in London—a meandering stream of a fountain, a playground and a memorial walk. It’s also a personal project of her sons, who commissioned it in 2017, the 20th anniversary of her death. They want the stone figure to capture their mother the way they remember her. They chose the designer, raised the funds for the project and oversaw every aspect of its installation. The sculptor, Ian Rank-Broadley, is famous for his realistic depictions of the human form, including the current effigy of the Queen on Commonwealth coinage. The committee overseeing the effort included one of Diana’s closest friends Julia Samuel, as well as her sister Lady Sarah McCorquodale.

Diana’s sons made it clear that they do not want the statue to become a pilgrimage site for the princess’s fervent fans. “Any flowers or tributes left there will be removed and placed at the golden gates, where they have always been permitted,” a source told the Daily Telegraph. “There is a strong desire that this does not become a shrine.”

Yet, as surely as the anniversary of her death has overshadowed that of her birth on July 1, 1961, this attempt to reset how the world sees Diana is at least temporarily eclipsed by the rancorous conflict between the brothers, who are now barely talking to each other as once-private disagreements about their lives, attitudes and duties are on public display. The fraternal split became a chasm this spring when Prince Harry stated that his family essentially did nothing as he and his wife, Meghan, suffered mentally from the stresses of their royal roles and an onslaught of racism that came from within the royal family as well as from the media. In addition, he said that his brother and father were “trapped within the system” of the monarchy, and that he was determined he wasn’t going to pass to his children the “genetic pain” that he and his father, Charles, had suffered.

RELATED: Meghan and Harry’s interview: A royals expert on what we did and didn’t learn

Harry’s obvious anger was matched by that of William, who was reportedly left reeling by his brother’s public attacks on his family and the throne on which he will one day sit. “We are very much not a racist family,” William said in his one public utterance on the issue. Since the pandemic began, the brothers have been together only once, at the funeral of their grandfather, Prince Philip, in April. Though they left the chapel together, reports soon emerged that the brothers avoided any deep discussion of the issues between them.

For their mother, they reunited again in public. This time, the rest of the royal family as well as both of their wives were absent: Meghan gave birth to a daughter in June while Kate bowed out. Though the pandemic precluded a big event, guests at the unveiling included Diana’s three siblings, as well as those who worked on the project.

There may not have been a full-bore reconciliation but neither was there any sign of acrimony between the brothers; they were determined to keep the focus on their mother. The brothers stood side by side, as they have done so many times, as they pulled the covering off the statue. The event, which occurred away from the general public’s view, was over in less than 30 minutes. And the brothers avoided giving duelling speeches. “Today, on what would have been our mother’s 60th birthday, we remember her love, strength and character–qualities that made her a force for good around the world, changing countless lives for the better,” they said in a joint statement. “Every day, we wish she were still with us, and our hope is that this statue will be seen forever as a symbol of her life and her legacy.”