For Canada 150, architects should aim for solutions, not landmarks

Canada's centennial spurred a slew of architectural glories. But 50 years later, a truly great monument would be a design for a better country 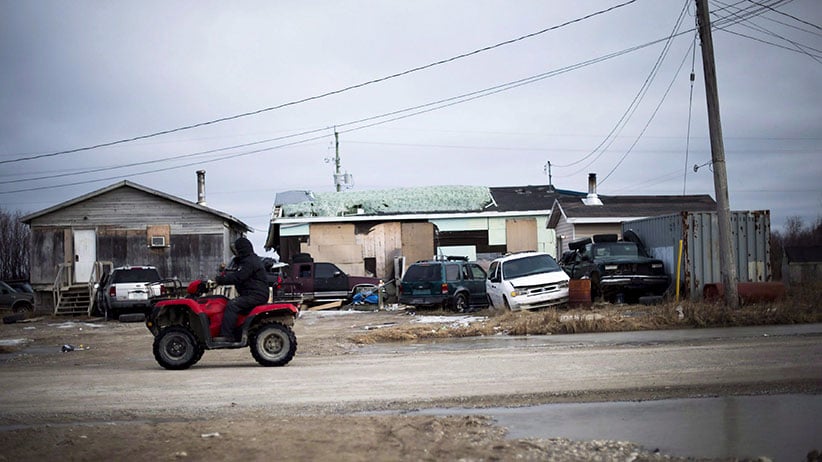 A man rides his ATV in the northern Ontario First Nations reserve in Attawapiskat, Ont., on Tuesday, April 19, 2016. (Nathan Denette/CP)

The story goes like this: once upon a time, in 1967, Canada was a happy place where architects were important. Even prime ministers would come to visit them and ask what the country should do for its birthday. The architects thought about it and said that Canada should build a planetarium. And Canada did, and the Vancouver Planetarium and Museum was a great planetarium, and everybody was very happy. Centennial Commission money also funded the Fathers of Confederation Memorial Buildings in Charlottetown, the Grand Théâtre de Québec, the Centennial Centre for Science and Technology in Toronto, Centennial Concert Hall in Winnipeg, and the National Arts Centre in Ottawa. And the architects were happiest of all.

Now, in 2017, despite the $300 million in the Canada 150 Community Infrastructure Program, architects aren’t feeling the love. “Little of this funding will be seen by architects,” writes Canadian Architect editor Elsa Lam. That’s because, she argues, it’s focused on rehabilitation and renovation of “cultural centres and museums … bike paths, golf courses, local airports and wastewater infrastructure,” rather than “solid architectural undertakings” like the projects that the centennial ushered into existence. A 2015 exhibition at the National Arts Centre looked at some of the projects built that year, a time that the curators mourn as a more “optimistic” era. Co-curator Marco Polo called architecture an “identity-building activity. It says a lot about our values whether we build well or poorly.” Shouldn’t a sesquicentennial be marked by some triumphal monument, a tribute to our identity and values?

But there’s a better question to be asked, instead: why are landmark projects “solid undertakings,” and why don’t wastewater plants qualify? Why do a few iconic buildings say more about a country’s identity than, say, its housing stock?

Maybe it says something about architects’ values. Outside of the Trump family, architectural quality is no longer measured in size, though there is still a practical reason to prefer large projects: the architect’s fee is calculated as a percentage of the overall budget. And while it’s true that, for a period of time around Expo ’67, megastructures in Canada and elsewhere were built with an enthusiasm that is now hard to imagine, it was 50 years ago when these forms coincided with (some) social values. Values like “optimism” aren’t fixed—whether you find a building optimistic depends a lot on who you are and when you visit it.

It’s true that architecture isn’t seen as a positive force in society today, but trying to recreate the past is not a sign of a healthy imagination for how to change that. Blanketing the 1960s with a golden nostalgia only erases those for whom the decade was a disaster, like the victims of the Sixties Scoop. And while some architects may believe that if we make the world look like it used to, perhaps it will act like that as well, repeating forms or resurrecting styles will not restore the associated social conditions—like a healthy middle class, wage growth, or affordable homes. Replicating a national, top-down program of Canadian anniversary megaprojects would only reinforce the public perception that so-called “solid” architecture is a luxury for countries celebrating episodes of financial exuberance, instead of being a discipline that can improve everyday life. That would only marginalize architects.

But size is seductive in architecture. In the 1990s, architect Rem Koolhaas raised it to the status of theory when he wrote that “bigness no longer needs the city.” There has always been an urge to build so big that context doesn’t matter, and there have always been those for whom the field was a form of personal expression at industrial scale: Frank Lloyd Wright is the best-known champion of this view. That attitude has been encouraged by the accelerating commodification of design and the banalization of many designers into brands, and by architects themselves who hold onto a heroic identity—epitomized in the celebrity status of the “starchitects.” This focus on the grandiose, encouraged by the architect’s fee structure, perpetuates the false connection between good architecture and big, bold individualism, a macho conception of imposing order rather than negotiating, compromising, and conversing with many existing orders—the kind of work that architects actually spend most of their time doing.

Developing tools for others is one way to resist this individualizing and isolating tendency. So instead of pretending that we can roll back the last fifty years, what if architects turned to the problems that are urgent now? The question shouldn’t be around what monument we could build to showcase Canada today—it should be around the kind of national legacy we could build in 2017 that we would be proud of in 2067. 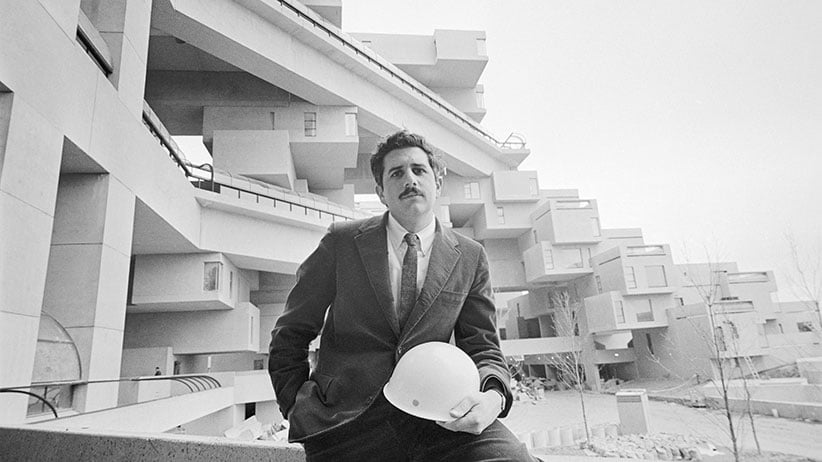 Architect Moshe Safdie, 28, sits on the railing of “Habitat,” his answer to apartment housing that will be one of the more spectacular exhibits at the 1967 World Exhibition, (EXPO 67). There are 158 apartments here, laid out according to 15 separate floor plans. (Bettmann/Getty Images)

Architects should be thinking—and talking loudly in public—about the more than 200,000 Canadians who experience homelessness every year. Housing is increasingly unaffordable in our major cities, and the market bubble in Canada may even be worse than it was in the United States before the crash. This is obviously not the fault of architects, but neither is it entirely the result of real-estate speculation. Housing becomes less affordable when we don’t build it; public housing is not being built in the quantities that it’s needed, and governments’ abandonment of this responsibility has contributed to the squeeze. There are also mismatched rules, like in Vancouver where two-thirds of land is zoned for single-family housing, or in Toronto, where the figure is 40 per cent. The detached single-family home is itself a problem since it creates an unsustainable land and energy footprint. Why don’t architects help shift perceptions of how it is possible to live under these conditions, or how to change the conditions themselves?

What is the more ambitious legacy: a garland of architectural jewels around the nation’s neck, or global leadership in developing high-quality infill housing? The March budget set out $11.2 billion for a National Housing Strategy—spread out over 11 years, yes, but still a lot more money than the Centennial Commission had. This is both a bigger opportunity and a greater challenge. Where are the calls for new models for urban growth and densification?

The condition of housing and lack of drinking water on many First Nations is our national shame. Why not demand that the 150 celebrations fund competitions for architects—preferably Indigenous ones, as there are 15 registered in Canada now—to work for First Nations in developing new systems of locally produced and elegant housing and infrastructure in remote communities? Major firms could support the effort through pro bono work. It might not pick up any design prizes, but wouldn’t this be an act of an optimistic country—as well as a just one?

The crisis of climate change is already producing mass migrations, and that will only accelerate. Many refugees will eventually come here, and compared to Italy, Germany, or Lebanon, Canada has a generous amount of time to plan for their arrival—as well as for the inevitable internal migrations. Why not demand a national resettlement plan that creates thousands of integrated communities while returning all Indigenous-claimed lands?

Architects will not “solve” these problems, per se, but they are well-suited to offer help in the spirit of humility and justice. If we insist that “solid” architecture should be limited to national interior decoration instead of deep reflections on the kind of world we want to live in, we’d also be abandoning the richest parts of architectural thinking. Recreating the “optimistic” 1960s might seem like a way of recovering a withered spirit of national energy, but it’s actually the least ambitious thing that architects could do. Aching for the past is a great way to avoid trying something new—or avoiding uncomfortable reflection on the social status of the architect in Canada today.

The architectural profession has the most to lose if it becomes socially and politically indifferent. Acting otherwise would mean acknowledging the contingent and messy roles of the architect, and perhaps even abandoning the idea that the practice inevitably results in the construction of buildings to consider producing changes through other means. For Canada 150, the country didn’t build a new national park—it made the existing ones free. How many conversations and journeys did that start? This is how a strategy can be much more powerful than a big new thing—and that a truly impressive legacy of Canada 150 celebrations would be to find new ways to build for the next 50.