For David Koch, the earth is his funeral pyre

Andray Domise: David Koch used his endless wealth to reshape not only politics but the fate of our planet, for the worse 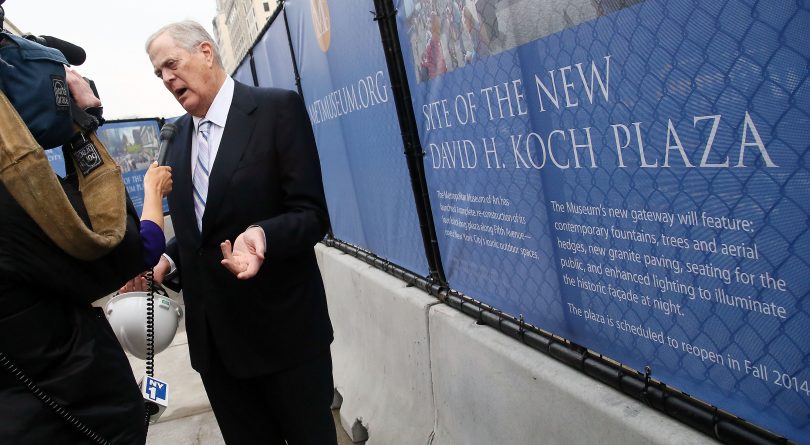 David H. Koch stands in the future site of the new David H. Koch Plaza during the Fifth Avenue Plaza Groundbreaking at the Metropolitan Museum of Art on Jan. 14, 2013 in New York City. (Astrid Stawiarz/Getty)

In the early 920s AD Ahmad ibn-Fadlan, a chronicler and theologian in the employ of the Abassid Caliphate, was dispatched to Vulga Bulgaria to explain the contours of Islam to a newly converted people. In his manuscripts, ibn-Fadlan described an encounter near the Volga river with a tribe he named the “Rūs” (thought to be a Scandinavian tribe travelling along the trade route), as they conducted a funeral for a departed noble. To complete the ritual, a young enslaved woman was taken by the noble’s family and sacrificed in brutal fashion. Once the sacrifice was completed, the bodies of the slave woman and the dead noble were placed in the boat together, piled with flaming wood, and before long, “wood, girl, and master were no more than ashes and dust.”

There are many accounts of slaves, thralls, and even spouses and kin sacrificed in servitude to the world’s rich and deceased throughout human history. The veracity of some of them is in dispute, but the theme is more or less the same: wealthy rulers can’t just die. They must also drag the souls of their subjects across the funeral pyre with them.

For obvious reasons, the modern world no longer tolerates human sacrifice. And yet, as the global mean temperature continues to rise, glaciers melt, plastics and pollutants saturate waterways, and wildfires blaze uncontrolled across the Amazon, it’s difficult not to wonder what ibn-Fadlan might have made of the supernatural reach of today’s billionaires, and the undying devotion of their vassals.

Take the recently departed David Koch, for example. The details of Koch’s life, and his family’s century-long pursuit of wealth,  power and right-wing political capture are well-documented. From the astroturfed Tea Party campaigns that drove the Republican party even farther right after the election of Barack Obama to the establishment of a school-to-policy pipeline for libertarian thought to the funding of climate-denialist organizations (much less the Kochs’s profiteering in the oil and gas industries), David and Charles Koch used their endless hoard of wealth to reshape not only politics, but the fate of our planet, for the worse.

And yet the Massachusetts Institute of Technology, Koch’s alma mater, memorialized him as a “prominent supporter of cancer research,” despite the Kochs’s endless strategizing and influence peddling to dismantle the Affordable Care Act while also preventing a ‘Medicare-for-All’ program from ever materializing. Elsewhere, Koch was lauded as an arts patron, even though his powerful network of billionaire donors and captive legislators pushed to privatize public education in several states while starving public schools with an austerity agenda.

Koch is far from alone in this regard. There are plenty of examples on our side of the border, but let’s go with Peter Munk. Just under a year after the death of the Canadian gold-mining magnate, his legacy conglomerate Barrick (as well as its Chinese partner firm Zijin Mining) was hit with a multi-billion dollar arbitration lawsuit in Papua New Guinea, over alleged breach of contract and alleged environmental damages related to its Porgera gold mine.

Barrick’s record in the global south doesn’t seem to have tarnished the image of Munk himself, who once brushed off rape allegations against the mine’s security personnel as a “cultural habit.” Munk’s massive philanthropic contributions not only gained him effusive praise in business, politics and the press, but multiple institutions⁠—the Munk School for Global Affairs, the Munk Debates and the Peter Munk Cardiac Centre⁠—carry his namesake. And at what price for near-universal adulation from Canada’s political class? Well, if you were to ask the numerous environmental and Indigenous groups that have fought to hold Barrick accountable, they would likely tell you it has been quite high indeed.

Before long, it won’t be far-away people feeling the effects of this rapidly settling environmental calamity. In the lifetimes of people old enough to read this article, it is distinctly possible they will see the collapse for themselves. Perhaps you will too. And maybe that’s what the ultimate purpose of human progress has been in the centuries since ibn-Fadlan made his way to Vulga Bulgaria: we’ve managed to shrink the world just small enough for our nobles to build the greatest pyre in history.

Speaking of that chronicler and that funeral: while the boat and its deceased occupants burned, a Rūs standing nearby said to ibn-Fadlan’s interpreter: “You Arabs are fools.”

MORE: Charles and David Koch: most despised monsters for the left

When ibn-Fadlan asked why he would say that, the Rūs responded, “because you put the men you love most, and the most noble among you, into the earth, where the worms and insects eat them.” To the Rūs, the idea of a rich man’s body nourishing the ecosystem that once nourished him, seemed the most preposterous thing he’d ever contemplated.

“We burn them in an instant,” said the Rūs said to ibn-Fadlan, “so that at once and without delay they enter paradise.”

To witness the agenda of environmental plunder and devastation that the richest and most powerful among us are wreaking on our planet, and to witness our political class as well as much of our media offer tacit assistance bordering on ghoulish, paradise seems far too generous a guess at where the souls of our dead nobles are going.

Wherever they wind up though, they do seem hell-bent on taking us with them.