For women of colour, there's a gap within the pay gap

Opinion: Filter the wage-gap numbers on the basis of race, and far greater wage discrepancies start to appear 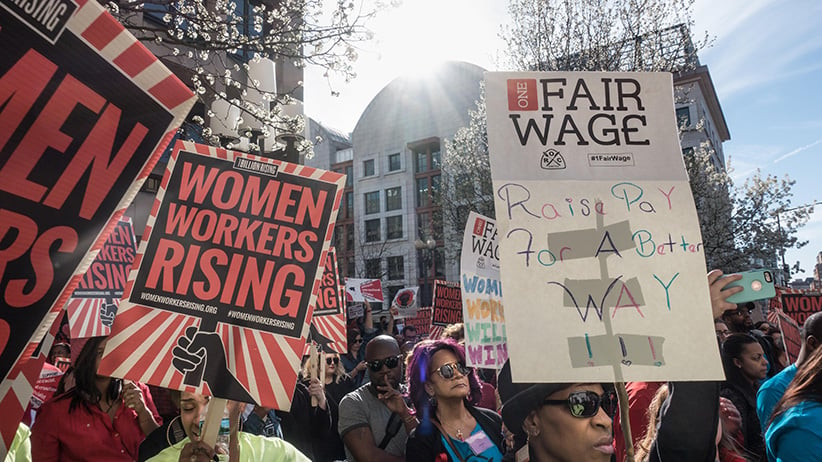 Demonstrators at the U.S. Labor Department headquarters building. Part of nationwide protests coinciding with International Women’s Day and the Day Without a Woman. During the late afternoon rally that followed, speakers demanded an end to workplace violence and harassment, pay equity, one fair living wage, paid leave, and labour rights at the workplace. (Bob Korn/Alamy)

Melayna Williams holds a J.D., and is the director of the Rights Advocacy Coalition for Equality (R.A.C.E.).

The gender wage gap remains a pertinent issue in Canada, despite how long women have been lending their labour to the workforce. And we often hear statistics that contrast two categories: men and women. On this, the numbers are stark.

But that data doesn’t incorporate ﬁlters around identity and background of women, an omission that effectively erases the compounding discrimination faced by non-white women in Canada. A lens that compares only men and women sets up women’s rights as a replica of patriarchy, where one group is favoured over everyone else; in doing so it reinforces the rigid power structures that have brought us to this point. But including race in the analysis reveals a different kind of gender gap that’s perhaps even more alarming than the broader issue.

Research has been done to identify the core issues and advance solutions around the position of Indigenous and Canadian women of colour in the work market. “Inequality, discrimination and a segmented labour market have left women of colour with earnings at just 64 per cent of men’s, and Aboriginal women’s earnings at just 46 per cent of men’s,” wrote Lisa Lambert in a 2010 paper titled “Gender wage gap even more pronounced for Aboriginal women.” For women of colour and Indigenous women in Canada, she writes, “the earnings situation is inexcusable.”

How are we closer to gender parity in Canada when the gender gap we often think about ignores the unique struggles of women of colour and Indigenous women? If white men are still making more money than white women, can this be acknowledged while addressing the fact that women of colour fall far below both? If we actually believe in the principles of equality with which Canada so proudly associates itself, we must acknowledge both crises: the gap between men and women, and that between racialized women and everyone else.

WATCH: Hadiya Roderique on the gender pay gap from the law firm to academia

Sufﬁce it to say, while the data is illuminating, this information is not surprising to the women of colour who’ve been struggling in the workforce, whose lived realities were certainly a part of our national fabric long before folks began to document it. And we have seen this before. During the ﬁrst-wave feminist movement in the U.S., entering the workforce was a right that white feminists fought to obtain for themselves only, forgetting that class, cultural and racial distinctions made the concept of liberation vastly different for other women. The arguments of ﬁrst-wave feminism—which sought liberation by participating in the capitalist workforce and removing restrictions that kept them to household tasks—would hardly have been foreign to African-American women; they too, after all, had created families. But they had competing interests and hardships, linked to both race and gender. Patricia Hill Collins, an American sociologist and pioneer of third-wave feminism, argued that “the racial division of labour, institutional racism and different family structures put African-American women in yet a different epistemic relation to society than white and other women.” The limits of the ﬁrst-wave push have prompted new ways of thinking; third-wave feminism emerged as a direct response to the movement’s missing lens on race.

When looking at wage-gap data and the types of jobs women are shut out of, the same divisions persist. While white women can struggle to maintain the high-level executive jobs that result from high educational attainment, and to navigate a male-dominated and often corporate world, women of colour are statistically left out of the process altogether. This is an essential gap: when diversity issues are raised, real change depends on who is at the table to draw them out. What’s more, we need data on senior staff at human rights and social services organizations to determine whether feminist issues are being decided on and funded by people who understand diversity beyond gender. And understanding doesn’t go far enough: women of colour need not just to be told they are disadvantaged and given what the status quo deems fair—they need to be given the tools to attain a position at the table and make decisions.

The gender pay gap is never just a conversation—it has real-life, often life-altering implications for women. And while we have come a long way, we are still producing an unhealthy tension between one-dimensional and intersectional feminism when we fail to prioritize women of colour in wage-gap analyses and solutions. We know how easily women of colour can be drowned out of conversations, even ones pertaining to their own livelihoods. There is nothing progressive about being satisﬁed with an aim we’ve failed to fully consider. Especially an equity-seeking aim that does not start with the ones who need help—and power—the most.